An Onsted Block Party in pictures 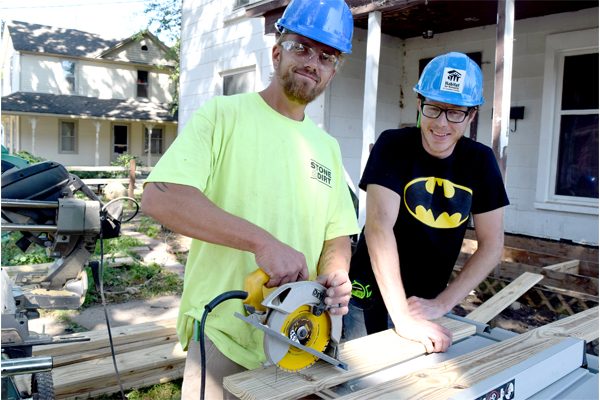 Habitat for Humanity of Lenawee County gathers volunteers last weekend, to help give a facelift to several homes in Onsted. Above, Andrew Wright and Dan Stoos cut wood as part of an assembly line to refurbish a front porch that was rotting and unsafe. During the Rock the Block party, volunteers focused exclusively on refurbishing the outside of people’s homes, which included light carpentry, painting and even yard work and tree removal. 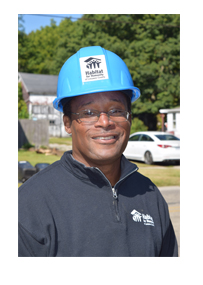 Around 60 volunteers descended on Onsted last week with one goal: To give a neighborhood a face lift. The program, called “Rock the Block,” targeted about 10 houses

“We sent our neighborhood revitalization coordinator here a couple of months ago to start talking to some people and letting them know we were coming in,” she said. The project included everything from yard work to power washing to outside structural renovation to tree removal and other light carpentry. (More below) 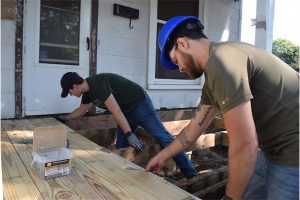 Chase Burford of Tipton and Isaac Torres Adrian work on a front porch.

Each homeowner is charged $10, which helps cover the paperwork, said Knox.

Community Outreach Manager De’Angelo Boone has been working with home owners to coordinate the effort, and made a great connection with Steve Muth, who made sure the workers were fed. “De’Angelo Boone came to me two weeks ago and said Habitat for Humanity is coming in, and I offered to put together some hospitality,” said Muth. He went to Meijer’s in Adrian, which donated hot dogs and the fixings, and made sure the workers had a place to take breaks, take a load off and relax. “I wanted to make it fun . . . more than just doing work,” said Muth, as upbeat music blared from his speakers. (More below) 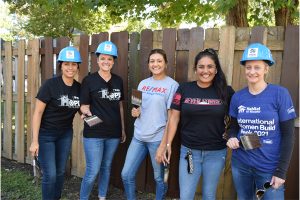 Painting ladies: Shelley Gutierrez, Heather Marks, Biana Cilley, Venessa Garcia and Elizabeth Rising, all from Adrian, took a break from painting to pose for a picture.

Muth also noted that the work the crew was putting into his house was very much appreciated, as he has had a rough couple of years. “Mine is just one of ten projects. It has been quite impressive,” said Muth. “This is really phenomenal. Onsted has a number of homes that can really use some improvement. In my particular case, I have had medical issues, including a recent hernia operation and three surgeries on my leg, and after that I had spinal cord surgery and was wearing a neck brace for a few months, so it has been really rough for me physically. The last few years have been horrific, health wise, so it is really nice to have people come into the community and help.” 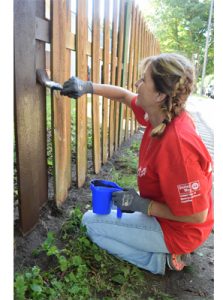 Workers were clearly happy to be in Onsted, and the overall tone of the day was as upbeat as the music coming from Muth’s speakers.

“I just live giving back to the community,” said Lindsay Benschoter, who was painting a fence.

Andrew Wright and Dan Stoos were working in tandem with Chase Burford and Isaac Torres in refurbishing a deck. “We are happy to be here,” said Torres, echoing Benschoter’s sentiments.

Linda Benschoter was busy painting a fence during the block party.

The feeling could not be contained. Shelley Gutierrez, Heather Marks, Biana Cilley, Venessa Garcia and Elizabeth Rising, all from Adrian, were enjoying painting and posed for a picture.

“It just feels good to be out here and give back,” noted one of the women.

To learn more about Habitat for Humanity, visit Habitat.org.