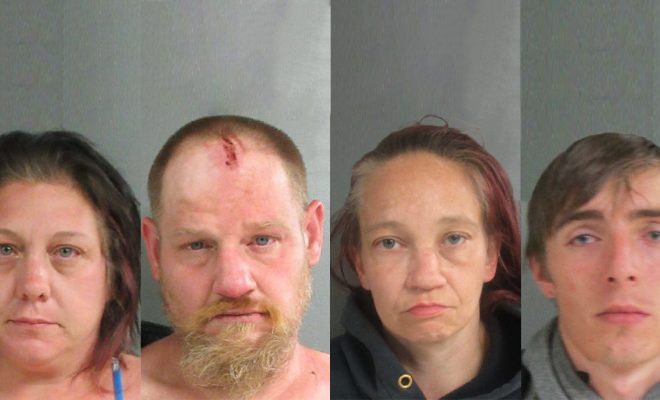 Three people have been arrested and a fourth person is being sought as a result of a June 4, 2022, search warrant for narcotics executed at a residence in the 7000 block of Cement City Road in Columbia Township.

As a result of the search warrant, a significant amount of evidence was located and seized. The evidence collected produced probable cause to arrest several individuals. On June 5, an initial police report was forwarded to Jackson County Prosecuting Attorney Jerry Jarzynka for review.

As a result of the prosecutor’s review of the report, Jessica Stahl, 41, of Columbia Township was arrested on one count of controlled substance – possession of methamphetamine, a felony punishable by 10 years in prison and/or a $15,000 fine. Stahl pled guilty to the use of a controlled substance. She is scheduled for sentencing later this month before Judge Goostrey

Officer Scrumpler completed an additional investigation and forwarded portions of the evidence collected to the Michigan State Police Crime Laboratory in Lansing. The remaining portions of the police report were forwarded to the Jackson County Prosecutor’s Office on June 16. As a result of the additional investigation and prosecutor’s review, two more individuals have been arrested and one charged with drug-related crimes.

Stacey Sigg, 38, of Columbia Township was also arrested on July 15 on one count of a controlled substance – possession of less than 25 grams, a felony punishable by four years in prison and/or a $25,000 fine. She had an outstanding probation violation pending and is currently being held without bond on the probation violation.

The prosecutor’s office has also charged Keith Myers, 32, of Columbia Township with controlled substance – possession of less than 25 grams, a felony punishable up to four years in prison and/or a $25,000 fine. He is currently being sought under this warrant. Myers is described as a Caucasian male, 5 foot 11 inches in height and approximately 160 pounds. He has brown hair and blue eyes. If you know the whereabouts of Myers, contact the Columbia Township Police Department at 517-592-3122.