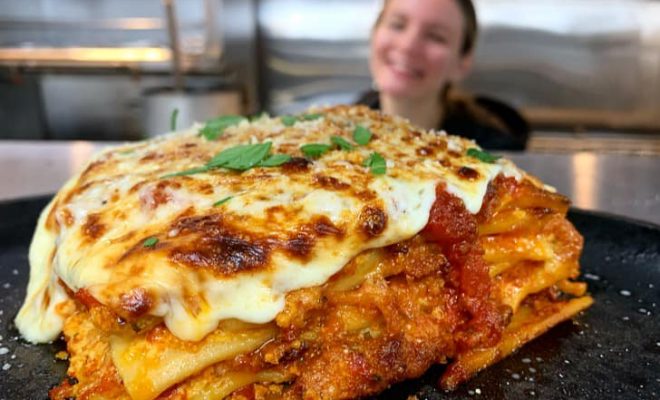 Whether you have a hunger for lasagna, fettuccine or even some great homemade pie, Booher’s has it.

Love of food is what started the idea for the market and diner for Craig Booher. That as well as not wanting to leave the Napoleon community he has been part of for the last 30 years.

Booher, who moved to the area in 1990 to teach US history, government and global issues at Napoleon High School enjoyed cooking for family, friends and his AP students long before the market and diner became part of his “retirement plan.”

Retiring from teaching in 2020, a little earlier than planned, due to the unknowns of what COVID might mean for the teaching profession, he first tackled the greenhouse business in a structure on the same property. Not really having “any idea what he was doing,” he alongside his son, Regan, enjoyed a flourishing blooming season, giving him the confidence and momentum to tackle his next project: opening the diner. 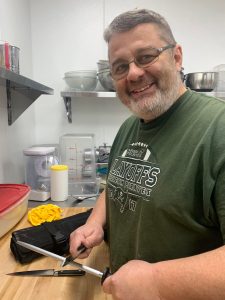 Craig Booher and his team is serving spaghetti, lasagna, and other Italian fares at Booher’s Fresh Market and Diner in Napoleon Township.

His love of cooking started where he grew up in Redford, close to Detroit, surrounded by Italian and Sicilian families who loved to cook dishes from scratch. When friends invited him into their homes, he paid attention to what was being prepared. The marinara or “red sauce” he serves in the restaurant today was derived from watching a friend’s “Grandma Arietta” prepare it in her kitchen, without measuring or using a recipe.

It’s obvious Booher has put as much pride and passion into his love of cooking as he did when teaching his students during his years at NHS. He smiles when it is noted that many of the patrons coming into his establishment still refer to him as “Mr. Booher.” Many remember the study parties where he served his home-cooked dishes. His students point to the sign on the wall of the restaurant “Istanbul to Constantinople” which serves as a fond or maybe not-so-fond reminder to them that a song by the same name was played right before a test was going to take place. Either way, it is clear Booher was a well-liked and respected high school teacher and middle school football and wrestling coach. Reminders of history are encased in the countertop of the seating area. (more below)

Testing the water, he helped a friend with his menu for a Mexican restaurant he opened the summer in 2010, a popular Taco stand on Michigan Avenue. But his choice to serve Italian food became obvious when the only local “from scratch” Italian restaurant, Giglio’s, closed in 2014.

The diner has become a family and friend affair with not only Booher’s son Regan assisting with whatever is needed at the back of the house, but both his daughters, Elizabeth working the front of the house, and Anna also helping as much as her nursing school schedule permits. Devon Otto, his future son-in-law, is the manager and several family friends are pulled in to help as needed. His wife, Sandra, still teaches at Waldron, but assists after school and weekends.

Buying most products locally, the summer offers farm-to-table vegetables with his own greenhouse supporting the fresh herbs used in his famous red sauces. 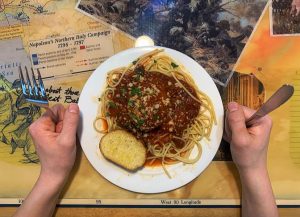 Open since January 4, they have done little advertising sans the Facebook post announcing their soft opening, but the word has spread quickly. “It was a fast-learning experience those first couple weeks, but now going into week three, we feel like we have our processes down,” Booher comments. “It’s like a 30-year reunion, connecting with people you haven’t seen in years. There is a love here, and it’s so great to live in a place where people care about you and want you to succeed.”

Fettuccine Alfredo, lasagna, spaghetti with meatballs, soup, salad, sandwiches, and homemade pies are some of the offerings, alongside freshly baked garlic bread served with every entrée.