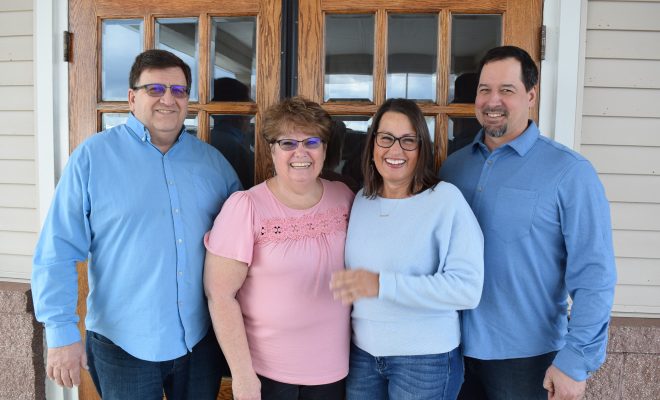 Something a bit unusual is happening in the local church scene, as two established Brooklyn-area churches are merging to become one.

“It is a coming together as two healthy churches make a healthier church,” said Pastor Steve Samonek, who has overseen Abundant Life Assembly of God church in Brooklyn since its inception.

Steve and his wife Melissa came to Brooklyn from Bethany Assembly of God, where they had served as youth pastors. They were initially supported by Bethany, and the church under their tutelage grew.

Last fall, the Samoneks were approached by pastors Bob and Shelley Norman of New Jerusalem Christian Fellowship with the idea of combining the two entities. What has happened since that first meeting included a lot of talking, the forming of friendships, holding meetings between the two churches, and ultimately decisions by both church bodies to become one. (more below) 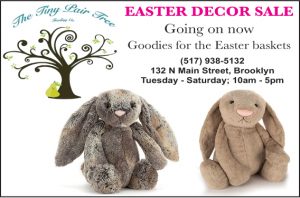 “We started with just the idea that Pastor Bob and Pastor Shelly would like to retire,” said Pastor Samonek.

The idea of combining churches raised questions of doctrinal issues, some of which may be worked through, but some of which would be potential stumbling blocks.

“We did assess doctrine, style, history, and government and, honestly, as it relates to doctrine, I don’t know that we found a sticking point, we were very similar,” said Samonek.

Pastor Bob Norman agreed. “When you put our two constitutions together, they were just very similar. There were a few little things, but not a big deal.”

“We felt very aligned,” said Samonek. “I would say stylistically we are very similar, our styles of worship, even styles of dress and church culture, even things like missions and kid’s ministries. Obviously, everything was not the same, but we felt we were fairly aligned.”

Samonek said that church the government was probably one of the bigger differences to overcome. Both churches have governing boards. New Jerusalem’s Board of Elders was appointed for indefinite terms, while Abundant Life’s board of deacons is elected with a term limit. (more below) 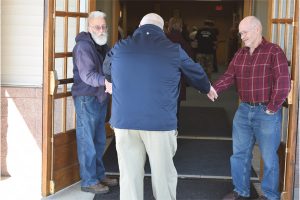 “The authority structure within the church as it relates to the board was also different,” said Samonek. “That was probably the biggest issue.”

To overcome the differences, New Jerusalem agreed to come in under the Assembly of God denomination, which Abundant Life is already affiliated with. Once they made that decision, “That made that big [governance] difference kind of a moot point,” said Samonek. “That really did not become an issue because there was an agreement to change.”

As an Assembly of God affiliate, local churches can buy and sell the property. That means that the church property in Brooklyn will be sold, and the property currently owned by New Jerusalem, which is located at 14977 Harper Road (On U.S. 127 about a mile west of Cement City), will be sold to the new entity, which will continue to be called Abundant Life Assembly of God.

“So the church together will own the property.”

New Jerusalem was formed 102 years ago in Vandercook Lake and underwent a few name changes and moves through the years. They moved to their current site in 1998.

Even the size of the churches was similar, with New Jerusalem having an estimated 80 attendees, and Abundant Life having around 100 . . . not bad numbers, considering that COVID had hurt many small churches. (more below) 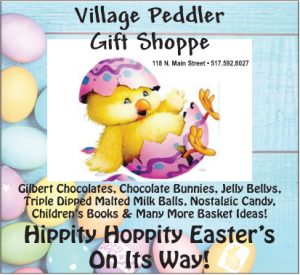 So, the question begs, who will be Pastor?

“This is my pastor,” said Norman of Pastor Samonek.

So far, it has been smooth sailing for the merger. The two groups have used a book titled Better Together that addresses church mergers to help work through potential pitfalls. “I would say 80 to 90 percent of the churches have major problems,” said Norman. “We have had very few.”

Norman credits that to God.

“This is God’s idea, not our idea,” said Pastor Norman.

Samonek agreed and noted that the book Better Together states that if merging churches can keep 75 to 80 percent of their people, they are doing good, just because of the change.

“We didn’t want to lose anyone. So we did a lot of communication, a lot of prayers, a lot of conversations.” (more below) 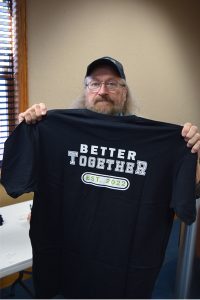 Mark Finch shows off a T-shirt that the church was giving away in celebration of its joining with New Jerusalem.

At the meetings between the two church bodies, they also gave them time to ask questions. “We saw about 100 percent of both our congregations at those meetings, and both were positive.

Pastor Shelley said she was concerned in the beginning. “I just wanted to make sure our church was going to be taken care of, that they wouldn’t feel left out or feel abandoned, and Pastor Steve and Melissa have done an awesome job of including people and knowing where they fit and trying to fit them into the same type of ministry.

“They have just done an outstanding job.” She said that the Samoneks went through a lot of work putting on the four meetings, which included dinners, and the people felt like “I am wanted and I am loved. I am needed, and I belong here, and this is what God wants for us.” (more below) 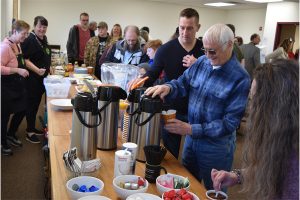 Pastor Steve said that the merger reminds him of the verse in the book of Ecclesiastes, where it is quoted that “Two is better than one.”

“Two are better than one; because they have a good reward for their labour.

“For if they fall, the one will lift up his fellow: but woe to him that is alone when he falleth; for he hath not another to help him up.

“Again, if two lie together, then they have heat: but how can one be warm alone?

“And if one prevail against him, two shall withstand him; and a threefold cord is not quickly broken.” Ecc. 4, 9-12 KJV.

“Everything improves when we are together,” he said.