Camp Liberty Freedom Festival reaches out to the community

Rick Bater of Jackson, pictured above, was on hand at the Camp Liberty Fall Car Show & Freedom Festival Sunday to support the work of the camp as a resource for veterans to get out and enjoy nature and the many outdoor activities the camp offers them. The event featured a car show put on by Marshall Motors, food and refreshments, as well as activities for kids including hayrides, pumpkins, face painting, and trick-or-treating. (more below) 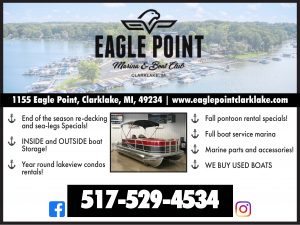 Camp Liberty Development Director Annie Callahan said the event was geared toward drawing support from the local area. Callahan, who started her role with Camp Liberty in January 2021, said she has been surprised that she learned the camp is not well known in the area. She is making an effort to change that and Sunday’s event, which drew a large crowd, was the beginning of that effort. She is also making headway into utilizing the talents of veterans for children’s programs.

Camp Liberty, located on 137 acres off Austin Road in Norvell Township, provides inclusive outdoor recreation programs that aid in the reintegration of U.S. military service members, veterans, and their families, with an emphasis on assisting those with post-traumatic stress, traumatic brain injuries, and mobility disabilities. The camp’s vision is to build a stronger veterans’ community while providing access to the outdoors for any veteran that needs a place to go. 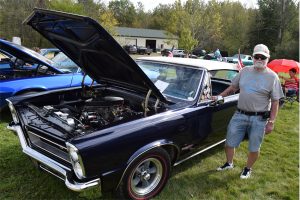 Above, Phil Pearson of Pleasant Lake (north of Jackson) brought his 1965 Pontiac GTO to the Camp Liberty car show. Pearson has owned the car for over 20 years. The car has a Stroker motor, a 467 with dual quads. “It’s supposed to put out about 500 horses,” he said. It has a three-speed transmission in it. “It’s all beefed up so I don’t hurt it anymore,” he quipped. Pearson said he has quite a few friends who are veterans which brought him to the Camp Liberty event. 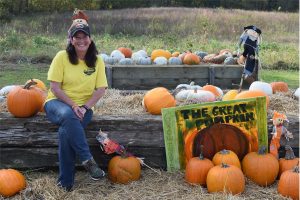 Camp Liberty Development Director Annie Callahan. She has taken on the role of fundraising and coordinating activities at the camp. Veteran volunteers who visited the camp over the summer helped Callahan grow these “patriotic pumpkins” to give to kids (and maybe a few adults!) who attended Camp Liberty’s Freedom Festival Sunday.