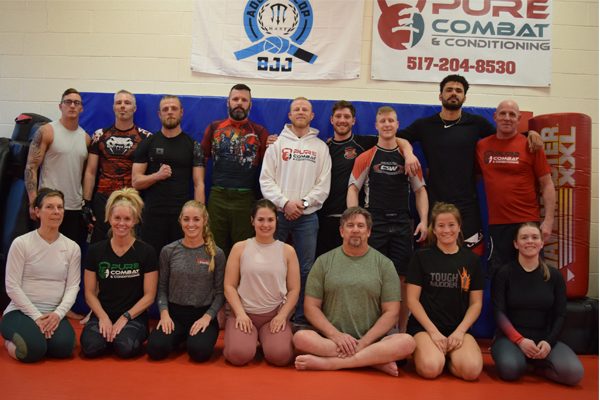 Group photo of students and teachers at Pure Combat and Conditioning in Cement City.

Why would someone take a self-defense course? There are as many answers to that question as there are people to answer it.

Emma Freeman of Concord said it is confidence-building. “It was scary at first, but now it is so much fun,” she said. 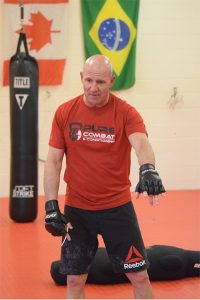 Lauren DeLand said that she decided to do it after being accepted to the University of Michigan. “I felt much more prepared,” she said, once she arrived on campus, knowing some self-defense techniques.

Rebecca Lulfs said that she does it for fun. “I love it,” she said of the physical workout and camaraderie that, quite frankly, is an intangible part of the students’ experience at Pure Combat & Conditioning. 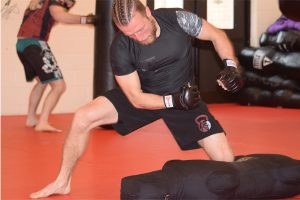 Even first-time visitors will sense an atmosphere that encourages learning as well as helping others improve.

Rodney and Terri Partridge, along with instructor Dan Claus, seem to have found a niche in Cement City. While their students come from all over, the co-owners hope more people discover how much fun the classes are and how effective they can be in promoting their personal safety as well as getting them into top physical condition. 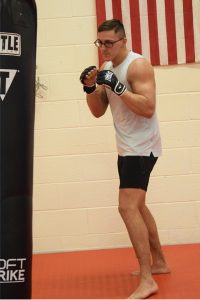 Partridge is a fifth-degree black belt in Okinawan Karate, a third-degree black belt in Brazilian Jiu-Jitsu, and is a certified instructor in Gracie Survival Tactics. His love for teaching people of all ages and capabilities to defend themselves and grow in confidence, as a result, is quickly evident upon entering his classroom.

Brazilian Jiu-Jitsu is a martial art and combat sport based on grappling and ground fighting, focusing on the skill of controlling one’s opponent through techniques that force him or her to submit. It allows a smaller, weaker person to use leverage and submissions (chokes, locks) to defend himself against a bigger opponent. With origins in Judo (Newaza) and Japanese Jujutsu, it has since been adapted and modified by Carlos Gracie and his family to become the martial art it is today. 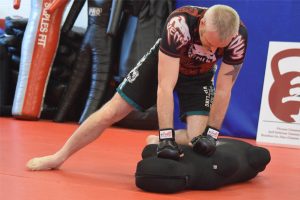 The popularity of Brazilian Jiu-Jitsu has been on a steady rise over the years, thanks in part to the growing audience of MMA . . . but you don’t have to be an MMA caliber fighter to come and learn.

One of Partridge’s favorite students says that the encouraging atmosphere has helped him immensely. Glen Ashlock said he was working out on his own before he started coming to Pure Combat and says it has been a great find. “I was a little intimidated at first, but I have known Rodney for a while before coming here, and he convinced me that he could find a way to make it work,” said Ashlock, who lost the use of his legs after contracting polio when he was 25 years old. “I was in the Peace Corps, so I got a rare strain,” said Ashlock. 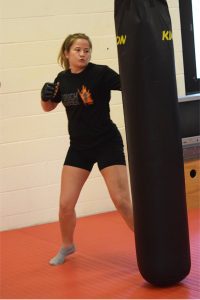 He notes that he enjoys the fraternity among students.

“Not only Rodney, but everybody here is really good at finding out ways that I can do things. People are always coming in and saying ‘Hey, I watched this video’ or ‘Hey I found this thing that Glen can do,’ and then we will all work on it.” 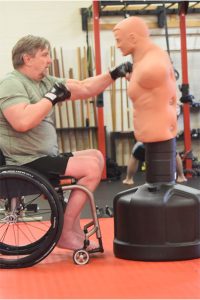 Glen Ashlock works on a dummy as part of his warmup before jiu-jitsu training.

The helpful atmosphere is also appreciated by Emma Freeman, who suggested that anyone who is intimidated or scared take a step out in faith and give Partridge and his team a try.

“You will be so glad you did,” she said.

Partridge made the former Cement City school home for Pure Combat shortly after Miller Elementary School was closed. “The baseball team was using the gym for pitching at the time. My friend was the varsity baseball coach, and he told me about it, and how I had to check it out.” 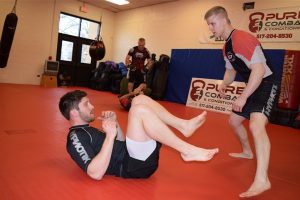 Taylor Morse works on his defensive moves while Frank Stepnowski looks for an opening.

He has been there since and now rents the space from building owner Kyle Bamm. The business has been a good draw for the community, as students come from across the tri-county area.

While helping all his students reach their potential is Partridge’s primary motivator, he also has a soft spot for law enforcement, military and first responders, and offers them special rates to use the facility and hone their self-defense skills. Tyler Tefft, a police officer with Columbia Township, said that Brazilian Jiu-Jitsu is a great skill to help protect not only himself but the public.

“It helps basically with subject control without actually injuring anybody,” said Tefft. 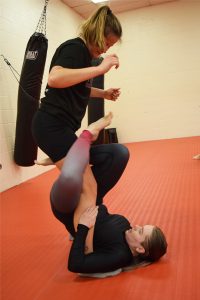 “We have all seen law enforcement situations through the years where someone got injured where it potentially could have been avoided. I feel that [Brazilian Jiu-Jitsu] is one way to avoid that. If we can control someone without injuring them it makes us safer, it makes the subject safer.”

Tefft said arresting people without injuring them “is our moral obligation, at least that is the way I feel and the way the department feels.” 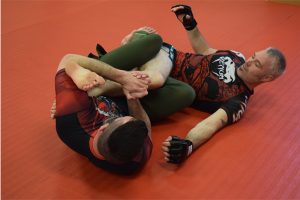 Brazilian Jiu-Jitsu classes are held immediately after the fitness class Tuesdays and Thursdays (from 6:30 to around 8 p.m.). Partridge also has classes for more advanced Jiu-Jitsu practitioners Mondays, Wednesdays and Sundays. 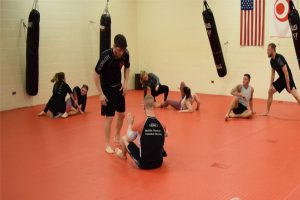 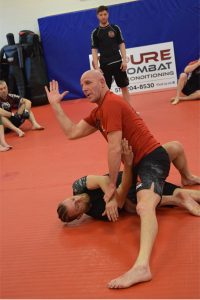 Instructor Rodney Partridge makes a point to students in the middle of an exercise.