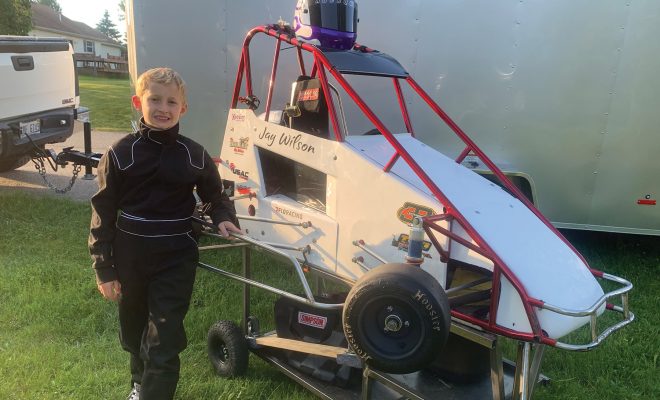 Brooklyn’s Jay Wilson III is off and rolling in his new sport of quarter midget racing.

Columbia Upper Elementary School student Jay Wilson III, 9, has been participating in a unique sport recently – quarter midget racing – and is doing extremely well at it. He has taken several first-place awards home recently, along with a couple of second places.

Jay started racing at the end of last season. This year is his first full season of racing. He says his secret to success is staying focused on the track and being aware of where other drivers are. His dad, James Wilson, may provide a tip or two as well.

Jay got interested in quarter midget racing after two of his friends told him about it. “I tried it, got interested in it, so I did it,” he said. It might help that his dad works for a custom body shop in Dundee. However, he’s never raced. “This is all new to me – it’s been fun,” James said.

“We went to a trial ride and everything just kind of fell into place after that,” James stated. “We went and bought a car, started doing rookie training, and now we’re a couple wins in and moving up.”

The Wilsons paid $1,800 for Jay’s car which they found on Facebook Marketplace. James also had to put a new motor in it and tires on it – so it’s not the cheapest sport in which to get started. “So far it’s done us good,” James noted, adding that a new quarter midget race car can cost around $8,000.

The races take place mainly on asphalt tracks usually about 1/20 mile in length. Races are typically around 20 laps per race. Jay races in a midget car with a Honda 120 motor. 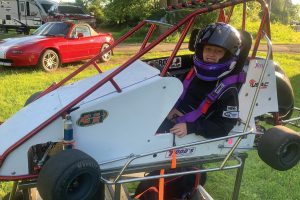 The Wilsons go to the Little Kalamazoo Speedway track for many of their races. They pay an annual membership fee of $125 to the Little Kalamazoo Speedway Quarter Midget Club since it is their home track. All racers must also be a member of the United States Auto Club (USAC) for insurance purposes for which there is a $100 fee. Jay also races in Lansing, home of the Capitol Quarter Midgets; Waterford, home of the Michigan Midget Racing Association; and at a track in Toledo.

The racing season starts at the end of April and continues through August. Jay’s next scheduled race is July 8-9 at the Little Kalamazoo Speedway. The races – three in all that weekend – are dubbed a “triple threat.”

Quarter midget racing is divided into 15 classes/divisions. Regardless of age, all drivers are required to participate in the rookie training program. The rookie program is a non-competitive class designed to make the driver comfortable with various race procedures such as lining up with other cars, passing, entering and exiting the track safely, and being on the track with other cars. After a driver graduates from rookie training, drivers can choose to race in any of the 15 different classes available.

At the Kalamazoo Little Speedway, drivers start off in what they call the “Red Rookie” class. The next step is Blue Rookie, followed by Junior Honda, Senior Honda, and up from there. There are certain speed restrictions for each class as the top speed increases with the class level. “They should be pretty equal out there,” James noted.

Jay moved up to Blue Rookie two weeks ago. “He’s been doing very well in that,” James said. Moving up to the next class is totally up to the racer as to when they feel ready. Jay has done eight races so far this year, taking home six first-place awards and two second-places, most recently winning first place in a Blue Rookie race. Jay’s near-term goal is to get up to the Senior Honda level for ages 9-16.

There is some flexibility in the size of a car, as long as the racers in a given class have the same engine and minimum weight. Cars are inspected after each race to ensure rules are met. James said there are mini-size cars, medium-sized cars, and larger-size cars. Jay’s car is medium-size.

A quarter midget car is a scaled-down version of an actual midget racer, approximately 1/4 scale. The cars are built around a tubular frame and are fully suspended with springs or torsion bars and shocks. The bodies are fiberglass, usually painted to the driver’s preference. Surrounding the driver is a chrome-moly roll cage and nerf bars. The engines are single cylinders and are manufactured by Honda, Continental/Deco and Briggs & Stratton. In stock configuration, they produce between 3 and 6 horsepower. Modifications in the upper classes allow these engines to reach several times the stock horsepower. These air-cooled 4 cycle engines are reliable and can produce over 10,000 rpm in their more highly modified forms.

Quarter midget racing has been around since before World War II. It is a family-oriented motorsport that involves children ages 5-16. The racing environment is all about children and family. Kids learn valuable skills and sportsmanship and may also make lifelong friends from all over the country. The cars, rules, and safety procedures are designed specifically for kids. The kids do the driving while other family members serve as part of the pit crew, chief mechanics, scorers, timekeepers, and operators of concession stands, etc.

The competitive aspect of racing teaches the meaning of sportsmanship, fair play by following rules, and how to be a good winner or a gracious loser. It develops coordination and a sense of timing and independent thinking. It teaches self-reliance. The sport also develops knowledge of and an appreciation for mechanical devices. It teaches safe driving skills that are carried on throughout life.

So, where might this quarter midget racing lead to for young Jay Wilson III? “I really want to race NASCAR and be like my dad and paint cars,” he said. Many current and former NASCAR drivers started out racing quarter midget cars.

For more information on quarter midget racing and sponsorship opportunities, contact James Wilson at wilsonjr0425@gmail.com. Links to YouTube videos of Jay racing can be found on Facebook at Jay Wilson Racing.