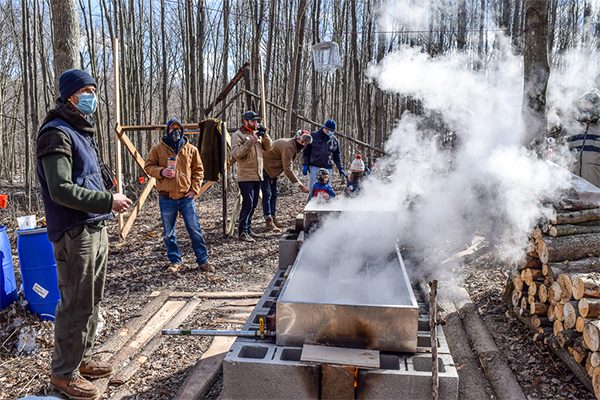 Silas Bialecki, front left, led a talk and demonstration at a small maple syrup operation on the property.

If you hold an outdoor event when the sun is out and COVID cases are down, they will come. That was the case on a recent Saturday morning when roughly 40 people attended an educational trail walk on the property of Bob Kellum in Tipton. 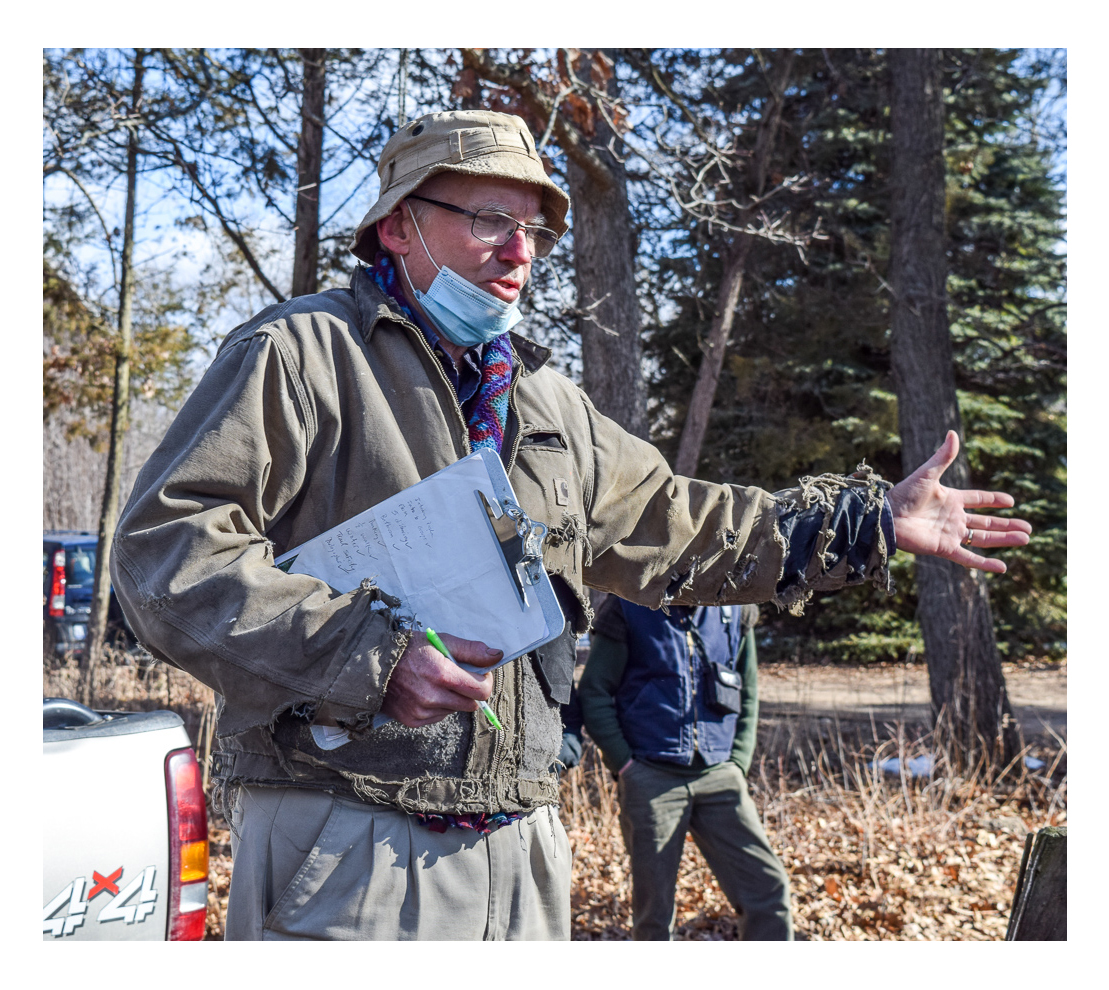 Kellum (shown in photo) titled the event “The interplay of human intentions and natural processes to be explored by Iron Creek Land Community”. The event was hosted by Kellum on behalf of a partnership of the Iron Creek Land Community (and within that the Open Grown School which teaches outdoor primitive skills and plant and animal identification), Wandering Washtenaw, and the Grand-Raisin Conservation Community of the Stewardship Network.

Kellum and his family manage about 300 acres of their own property, as well as another 300 acres nearby that they manage. Kellum has a crew from the Iron Creek Land Community that helps manage the second chunk of property.

The trek showcased a sampling of the area’s variable landforms and waterways as well as an opportunity to view a small maple syrup operation, thinning and harvesting of a white pine plantation, and an oak savanna reconstruction project.

Kellum started the event with a brief talk saying that he and his family have been “working the land” for decades. Kellum’s father planted some white pine stands on the property in 1962. “Right now, we’re just kind of dipping into the idea of harvesting and milling some of it,” he said. Participants were able to see that operation first-hand.

Next, Kellum explained that the oak savanna they are creating is one of the native, historical habitats of the area. “The oak openings, oak savannas, burr oak plains, or black oak barrens are all variations out of a theme that have been used in different eras meaning different things to different people. They all refer to a generally open landscape with a lot of grasses and wildflowers punctuated by occasional trees. You’ll see different places where, with a little imagination, you can say, ‘There I see it.’”

Stas Bialecki, one of Kellum’s nephews who helps manage and restore various parts of the land, added that with a trained eye, one can see areas that have been oak savannas in the past. “It’s crying out to be an oak savanna, but without the regimes of nature like fire, it doesn’t have a chance to develop into an oak savanna. We really try to help nature come into its full form.” To accomplish that, the family does a lot of prescribed burns, cutting of invasive species, and what Bialecki calls “architectural forestry” where selective trees are thinned and managed to help other species grow.

“The oak savannas are how we started, and as we encountered different habitats out here – the sugar bush (native maple trees), the pine trees, and especially some of the critically endangered wetlands – we are really trying to accentuate and make sure that those places stay intact,” he said. “You have to take into consideration what’s there and why it’s there. The best thing that we can do to preserve habitats going forward is preserving biodiversity.” Bialecki noted that it is estimated that there is less than one percent of native virgin oak savanna left in North America.

In addition, participants on the trail walk were also able to see ponds, wetlands, fens, streams, and woodlands. “There’s a whole mixture of landscape forms that we try to acknowledge,” Kellum noted. He explained that intertwined with all the beautiful, various ecosystem habitats are the historical reference points of people interacting with the land. (more below) 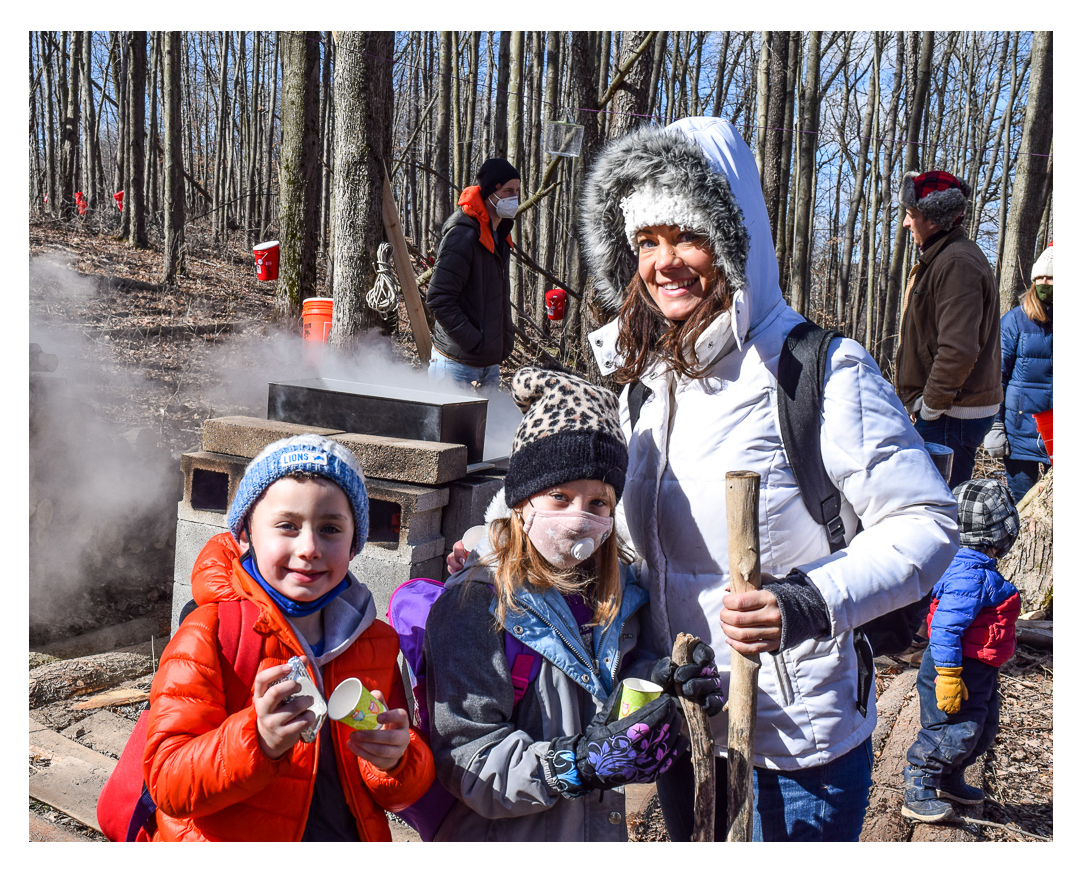 This family came all the way from Canton, Mich. to participate in the event. They enjoyed tasting some maple sap before it gets transformed into maple syrup. From left: Christian, Alessandra, and Michelle Kapas. 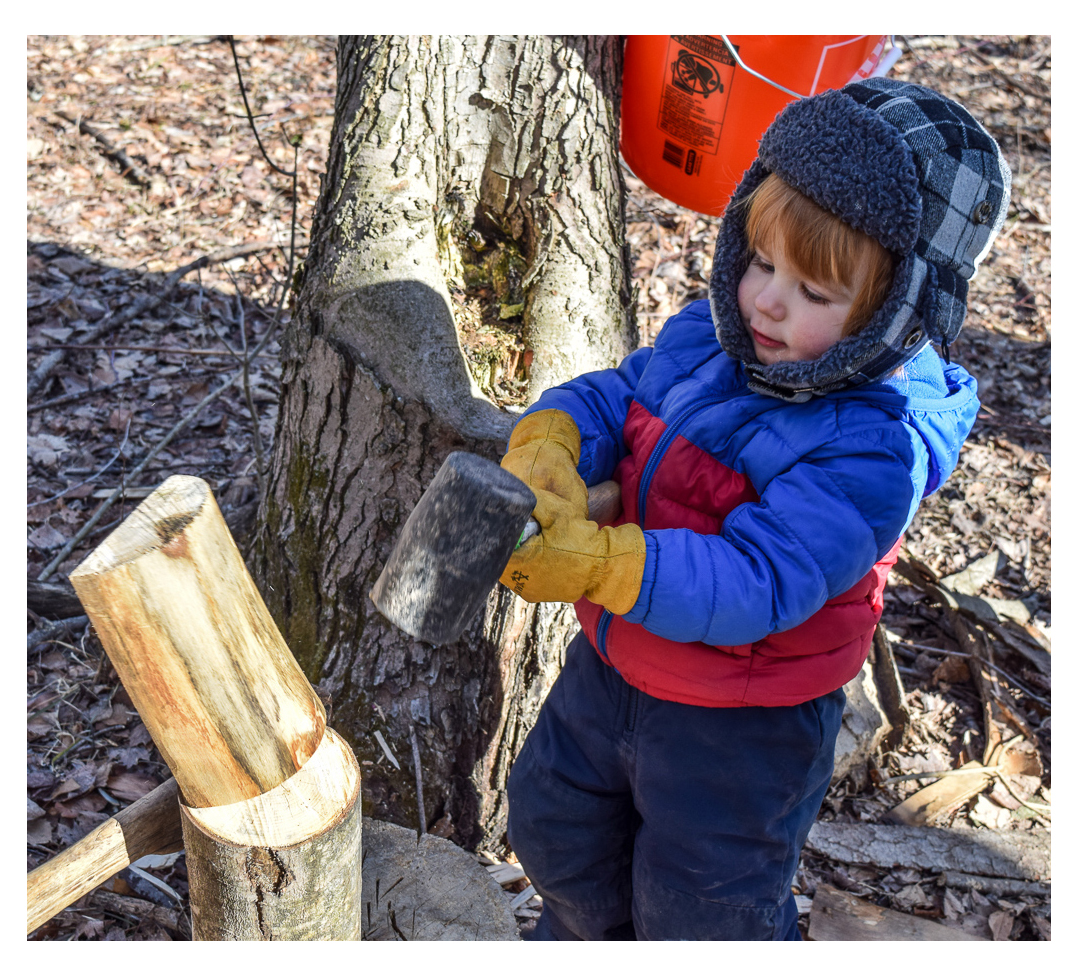 This little feller had fun “chopping wood,” entertaining himself during a presentation on the making of maple syrup.

“If you go back 10,000 years when the first Native Americans came here, their interaction with the land was very light,” he explained. “They deferred heavily to what nature was doing and took their cues from nature. Fast forward to the way we operate now, things are a little different. We think first about how we can change it to make it serve us and adapt to us.

“It’s that interplay of what we want our environment to be like versus what nature wants to do – those things tend to do a dance together – or one has the upper hand and then it inverts,” continued Kellum. He noted that humans have seen change in recent times including less snow and higher wind storms, noting that some disturbances are caused by nature and others by humans. “It’s this back-and-forth tension between these elements that I’m asking everyone to be aware of and to think about, not that any one of us has the answers to it, but just be aware that there is stuff going on.”

Silas Bialecki, another of Kellum’s nephews, led part of the group on a walk to see the maple syrup operation, which is in its first year. There are over 60 buckets currently hanging from tapped red maple trees deep into the woodlands on the property. Ideal conditions are when temperatures are above freezing during the day and below freezing at night, traditionally why the month of March is considered “maple syrup season”. 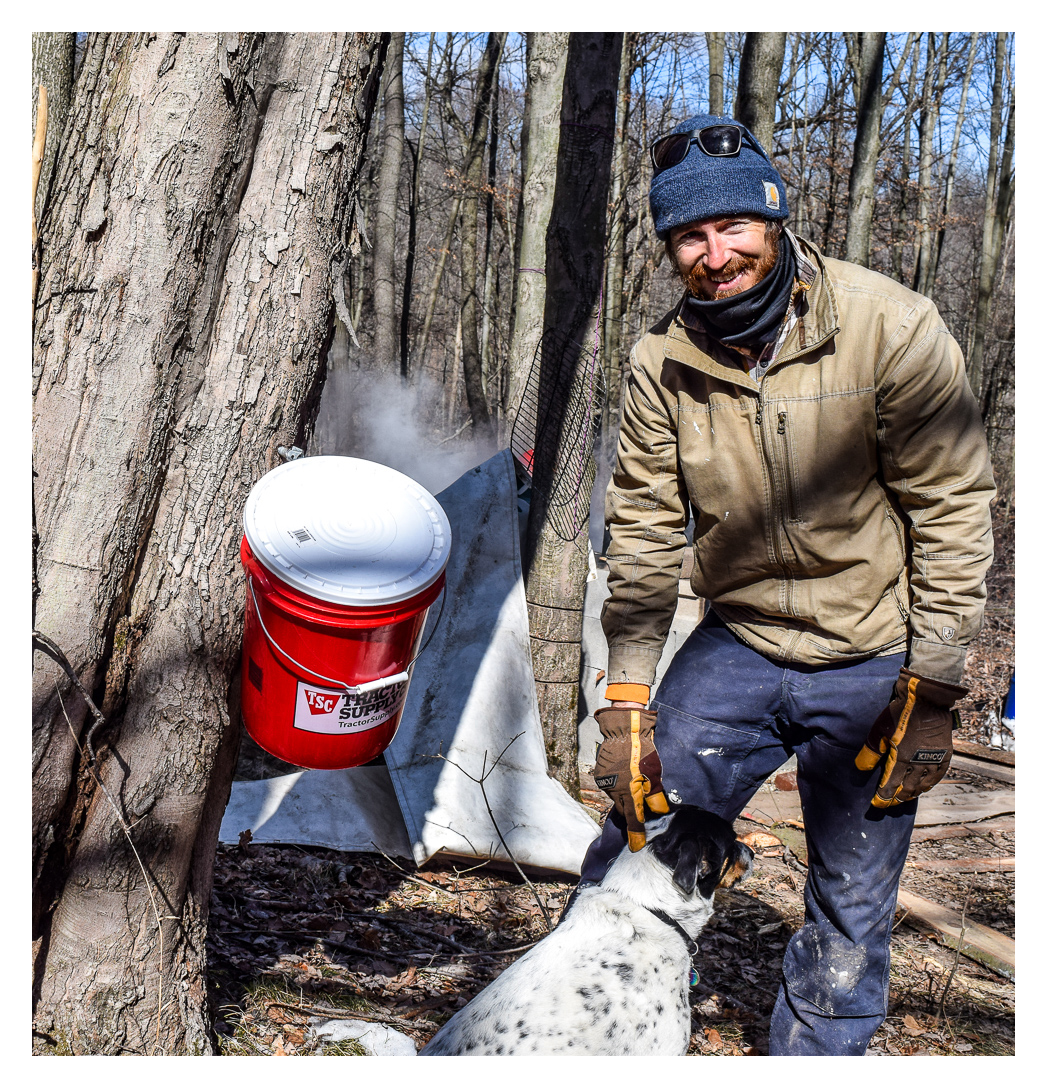 Though they are tapping the red maples available, Bialecki explained that black maples and sugar maples have much higher sugar content in their sap. “Black and sugar maples take about 40 gallons of sap to produce one gallon of syrup,” he explained. “These red maples are closer to 65 gallons of sap to create one gallon of syrup. It’s still worth it in the end. It tastes just as sweet; it’s the same sugar – there’s no difference in the final product to most people. We like it just as well. It’s fun to be out here and enjoy the ridge top.”

Bialecki said the family has talked about planting more upland-specific maple trees, including black and sugar maples, which are better for maple sugaring. “We’re still trying to work through ideally what we want to do,” he said.

Bielecki’s crew goes out to the operation every three days during the season to collect all the sap in the buckets by hand. A wood-burning homemade evaporator is onsite to cook off all the excess water that boils the 60-plus gallons of sap down to five gallons of sap before it’s finished off with a final boil on a wood stove to create one good gallon of maple syrup. Because it’s in its first year, the maple syrup operation currently is producing syrup for family and friends and is considered a “hobby” at this point. What it might grow to in the future is to be determined, Bialecki said.