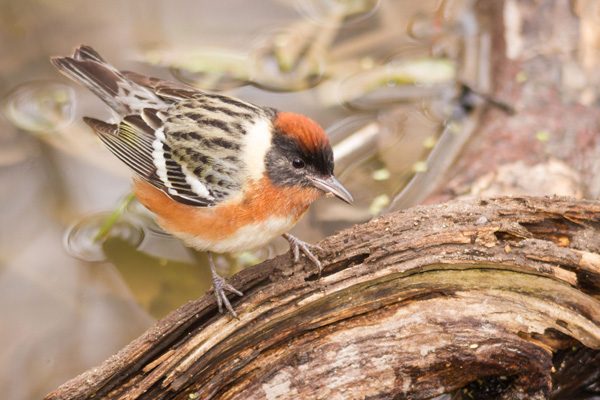 Above, a bay breasted warbler presented itself to Kimberly Kotzian, who was happy to snap its picture. To hear its song, click here then hit “Listen.”

Battle for the birdhouse

In today’s column, outdoors writer Steve Linenfelser focuses on a battle for his birdhouse. The column also features photographs of birds sent in by our readers. If you have an outdoors-related photograph you would like to share, send it to pictures@theexponent.com, along with a brief explanation and contact information. Thanks for sharing!

I had a friend years ago who sold real estate and he shared with me a common saying among other realtors that describes the three most important things in determining a houses value: location, location, location. If a house is in good condition and is on or near water with lots of trees, this can add to its value.

Apparently in the bird world, location is also important and adds “value” to the birds. For the past four weeks I have a birdhouse that has had either been occupied or visited by birds trying to nest in it seven different times. First of all, this particular birdhouse was originally occupied last year by a set of tree swallows. Tree swallows are a beautiful bird, about five to six inches tall with bright iridescent blue-green feathers on its back with a white colored breast, forked tail and the female is the same only a little duller.

These birds can often be seen near ponds or lakes (I have a lake nearby and two birdbaths) and they like to fly over open fields to catch insects. I also have a few raspberry bushes and a pear tree within several feet of this particular birdhouse. Last April, I watched a pair of tree swallows flying in and out of my birdhouse for a couple of weeks and had finally built a nest. Sadly, one day while opening the top of my birdhouse to see if the female had laid eggs, I was horrified to see a badly mutilated dead female swallow in the bottom of the birdhouse. Apparently, another bird flew in and attacked the cornered swallow and killed it. I was heading off to work at the time, so I decided I would remove the swallow when I got off work.

This story is courtesy of Designs by Judy. Check out their greenhouse for your spring planting needs. 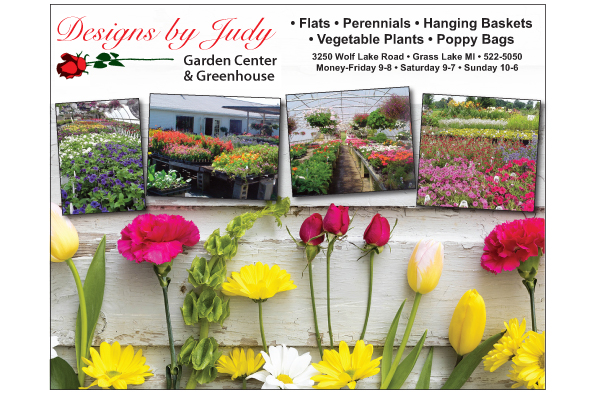 When I got home and was walking up to the birdhouse, a house sparrow flew out of it. I looked inside and saw that the sparrow had built a nest right on top of the dead swallow. I thought to myself, “Oh HELL NO,” and removed the deceased swallow as well as the sparrow nest. House Sparrows are not native to America. They originated from the Middle East, then later to Europe and several pairs were brought from England and introduced in Central Park in New York in 1850. Since then they have spread to forty eight states, and have caused billions of dollars in crop damage to farmers in the United States. They are an aggressive bird that will kill baby birds as well as adults in order to take over the nest. 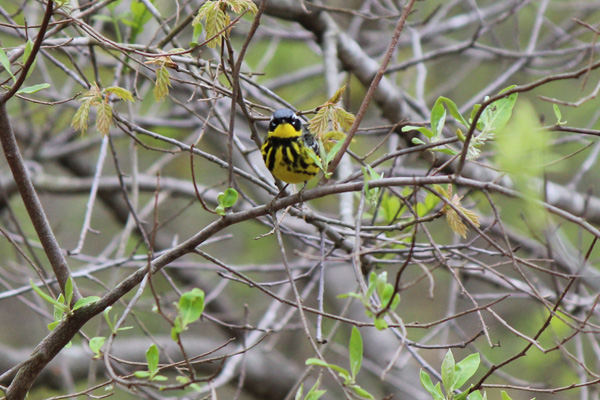 Above, Carol Mettler photographed this adult magnolia warbler near Onsted.

Last year I removed the birdhouse from my backyard until the sparrows left the area, and eventually I got a pair of bluebirds that “moved in” and they raised three chicks. I was hoping for bluebirds again this year, but was amazed by how many birds attempted to occupy this house. Around mid-April, I put up my birdhouse again in the same spot, right in front of a lilac bush and several feet from my bird bath, a pear tree, and raspberry bushes.

I walked up to my birdhouse one day and saw that it was filled with green moss and a few pieces of animal fur. I knew right away that this was from a black capped chickadee, but I was concerned because the entrance was only 1 3/8 inches in diameter and bigger birds could potentially enter it and take over the birdhouse. 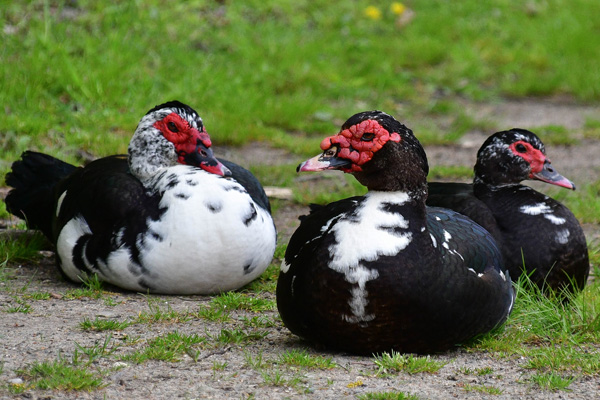 Lynn Okenka got a close look at these Muscovy ducks near Wamplers Lake.

Before I could adjust the size of the entrance, a pair of bluebirds had driven the chickadees away and had taken over the house, or at least they appeared to be interested as I saw them perching on top of my “bluebird” house. A few days later, a pair of house sparrows had driven off the bluebirds and the female sparrow built a nest in it. I decided I didn’t want sparrows, so I removed it for a few days until the sparrows left the area. The bluebirds tried again, but this time a European starling tried to occupy the house. Again, I removed the house from my yard and placed it in my garage for a few days because like the house sparrow, starlings are not native and are aggressive. 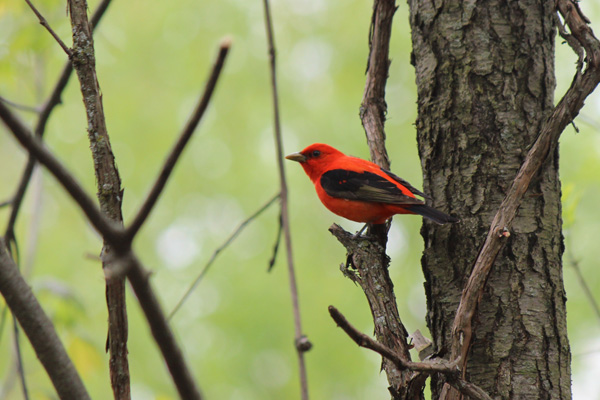 Then I waited, until early one morning I saw a pair of tree swallows that were flying above the field in my backyard, so I put the house back up. Tree swallows will often take anywhere from two to four weeks in building a nest and laying eggs, which leaves the door open for other birds. The female tree swallows place long grass and several feathers in her nest which she will curl and lay on top of her eggs. I have seen them pick up feathers off the ground, drop them on the ground and then fly back down to get them. They seem to be playing when they do this.

After about a week, another pair of bluebirds checked in the house. The female bluebird started building a nest while the male bluebird sat on top of the birdhouse, when all of a sudden, the male tree swallow shot in like a fighter jet and attacked. He was defending his house! The bluebird and tree swallow battled mid-air at first, before finally landing on the ground pecking at each other and flipping back and forth on top one another, and it seemed like the bluebird was getting the upper hand. The next thing that happened absolutely shocked me as I had never seen it before. 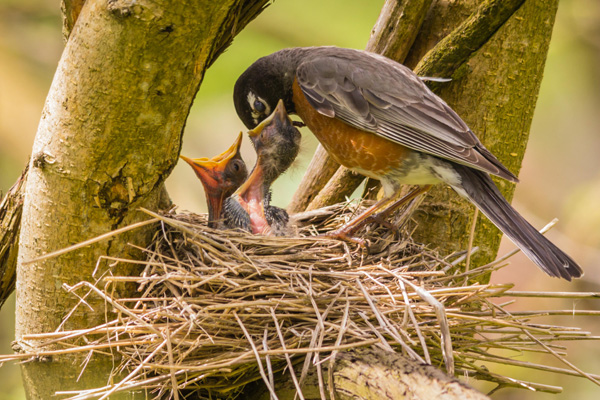 A female robin was building a nest in the pear tree about sixteen feet away and all of a sudden, her mate, the male robin slammed in between the two fighting birds as if he were a bouncer breaking up a fight. Stunned, both the bluebird and tree sparrow just looked at the robin as it spun back and forth and looked at each one as if to say “take it out of my yard, buddy. I want no fighting here.” Amazingly, the bluebird and tree swallow started to fight a second time and again the male robin slammed itself between them, breaking up the fight! In all my years of bird watching, I have never seen one species of bird breaking up a fight between two different species of birds.

It’s worth noting that while robins may tolerate tree swallows, they are very territorial and compete with similar food with bluebirds, so perhaps this was why. The bluebirds tried one more time to occupy the house, but again the male tree swallow attacked and then as if it needed backup the robin attacked the bluebird a third time. That pretty much did it, and the bluebirds left. 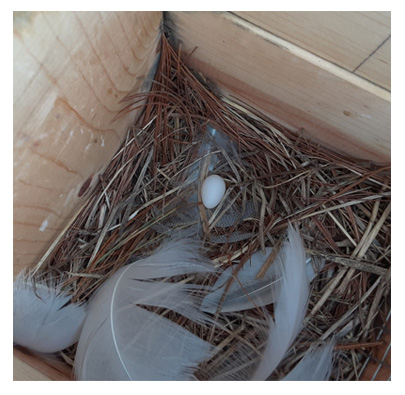 After many attempts to nest in the house I did notice that the female tree swallow had finally laid her first egg. It was small, about a third the size of my thumb and all white (pictured). Incidentally, as of this writing the female robin laid three blue colored eggs in her nest. When I climbed up a ladder to get a picture of it, the mother robin attacked and pecked at my bald head and left me a little reminder of the tenacity of a mother protecting her young.

Yes, apparently this birdhouse was sought after and fought over several times.

The moral of this story is it’s good to have backup in a fight. Like a fighter jet, it helps to have a “wing man.” Or in this case, a wing bird.