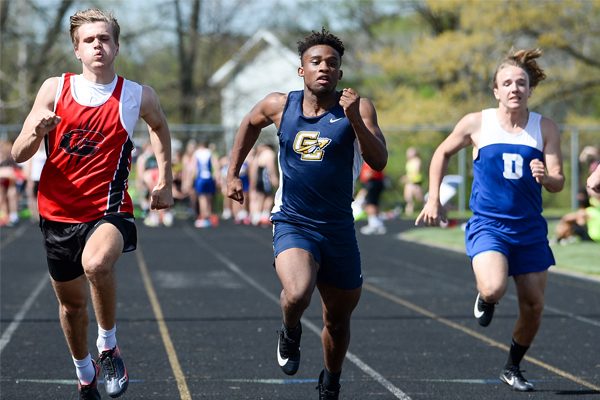 Andrew Stockton, center, of Grass Lake High School, is one of the top sprinters in Jackson County.

The Warriors marched up to the podium a number of times during the 2021 finals.

Sprinter Andrew Stockton was on the podium twice and returns to a team without a number of medal-winning athletes.

He would like to return to the podium at the state finals again and is looking to do so using knowledge learned last year through a solid senior class.

“I learned last year (from the senior class) to push myself to get better every day,” Stockton said. “After the first meet of the season (in 2021) we knew we had something special.”

The Warriors won a number of invitationals in 2021 and eventually won the regional and state titles.

“We knew we could achieve something more each week,” Stockton said of 2021. (more below)

But the junior knows that what happened last year has nothing to do with 2022.

“I got a slow start because of the weather,” Stockton said. “I keep getting better every meet.”

“You get a lot of great competition at this event,” Stockton said of the event at East Jackson.

Stockton has goals of returning to the state finals as a sprinter and with his sprint relay teams.