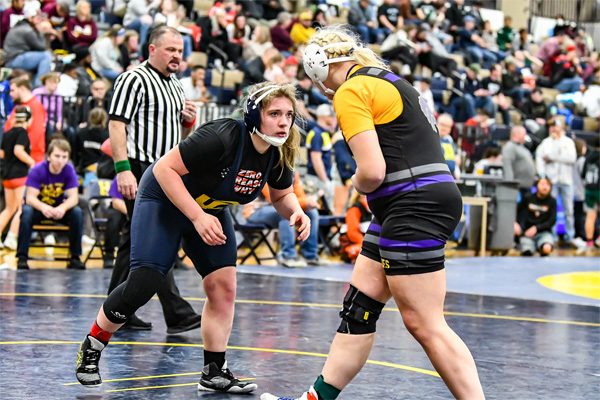 Wrestler Bella Huston may have looked around at one point this season and realized she wasn’t in Kansas anymore.

The freshman was wrestling male opponents for most of the season.

Huston finally had a chance to show what she could do at the girls-only regional tournament held on Feb. 20 at Hartland High School.

It is the first year the MHSAA has sponsored a girls-only state final in wrestling. More than 400 females wrestle in the state of Michigan.

Huston recently moved to the Brooklyn area after wrestling for two years in girls’ only events in Kansas.

“Girls are out there with something to prove on the mat,” Huston said after qualifying for the state tournament last weekend. “Guys are a lot stronger, so it limits your offense.”

Huston enters the state finals with a 4-14 record with most of her matches coming this season against male opponents. She finished 2-2 on the day at the regional tournament with a pair of pins.

She didn’t know what to expect at the regional tournament having wrestled guys for most of the season.

The freshman played junior varsity football for the Golden Eagles this past fall but may stick to wrestling exclusively.

“I love wrestling because it is a good way to get all your stress out and get a good workout,” Huston said. “I may drop all of my other sports . . . I enjoy wrestling that much.”

Huston will be one of 15 wrestlers hoping to be on top of the podium at Ford Field next Saturday. Each of the state-qualifying wrestlers will be in a 16-person bracket with the top eight earning all-state medals.

The key is to win two matches before you lose two bouts.