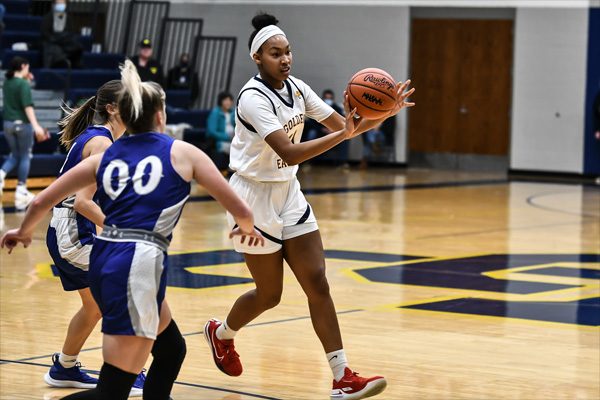 Pictured above, Columbia Central High School basketball player Tadassa Brown passes the ball to a teammate during a recent home game. This local athlete is in the running for MLive’s Athlete of the Year and looks forward to attending Clemson this coming Fall.

Along the way, Brown is also offering help for a young team.

She has plenty of experience.

Brown is the oldest of nine children in her family and being a positive leader is just par for the course.

“I am the oldest of nine kids at home so I kind of have to be the leader,” Brown said. “As the only senior on the basketball team, it is my job to be positive.

“I might get after them (CCHS younger players) a little bit, but I come back with something positive to say.” (more below)

The senior is stuffing the statistical sheet every night and probably giving away some points scored for her role as the point guard – who can also play wing and post.

“She wanted to play the position of point guard this season,” CCHS Coach Codi Cole said. “We have a lot of inexperience at guard, but she has proven she can handle the ball with the best of them.”

Brown has signed to play at Clemson next fall. She knew the experience of being at the point would be valuable.

“I have never been comfortable (playing point guard) in a game,” Brown said. “Playing with Michigan Crossover (an AAU team out of Detroit), I have been able to improve my ball-handling skills.

“Running the point also gets me in better shape.” (more below)

Others are taking notice of Brown’s statistics. MLive mentioned her as a possible player of the year in Michigan in a recent column.

Those statistics have been turning into wins for Columbia Central. After losing a season-opening game to Western, the Golden Eagles have won seven of its last eight games.

“I have the date to leave (for Clemson) already set,” Brown said. “The experience itself will be great because the coaches and players at Clemson are genuine.

“That is why I chose Clemson.”