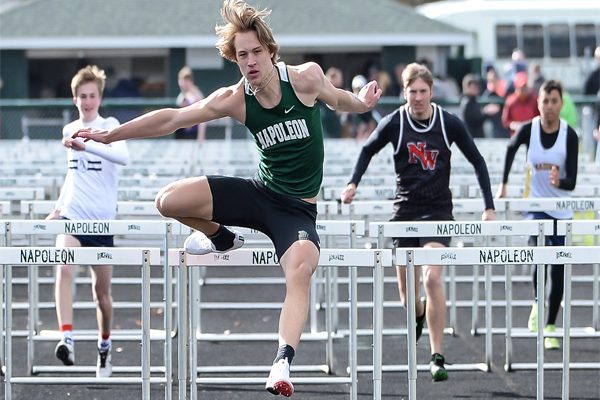 Napoleon High School track and field athlete Holden Van Poppel is one of the top hurdlers in Jackson County and has added some solid efforts at the long jump pit this season.

As a freshman, Napoleon High School track and field athlete Holden Van Poppel finished 11th in the high hurdles and 13th in the intermediate hurdles at the Division 3 state meet.

Most athletes would be happy with those finishes.

Not Van Poppel and he is doing something about it . . . getting better at the hurdles and adding a much-improved long jump routine.

“I think I will be more confident this year,” Van Poppel said of his performance at last year’s Michigan High School Athletic Association Division 3 state track and field finals. “I should have been up there (in the top eight to earn a medal), but I wasn’t.”

Now a sophomore, Van Poppel is a little bigger, a tenth or two faster on the track and believes he can be a solid long jumper.

He jumped over 19 feet in his first meet – two feet further than last year – and 20 feet, 8.5 inches in a subsequent meet.

Van Poppel is jumping nearly four feet further than last year and leading Jackson County in the 110-meter hurdles (15.99 seconds) and the long jump. (more below)

“Our coaches are helping me in practice,” Van Poppel said. “The hardest part is extending your legs out so you can get further.

Van Poppel said playing football in the fall and basketball during the winter has made him a better athlete.

But don’t’ ask him what his favorite sport is.

“My favorite sport is whatever sport I am participating in at the time,” Van Poppel said.

Van Poppel and the Pirates had a solid football season with a 6-3 record. A change to the state qualifying procedure left Napoleon on the outside looking in.

“We just have to go out and win every game next year,” Van Poppel said of the 2022 football season. “That will take care of it.”

The Pirates finished the basketball season this past winter with a 19-3 record.