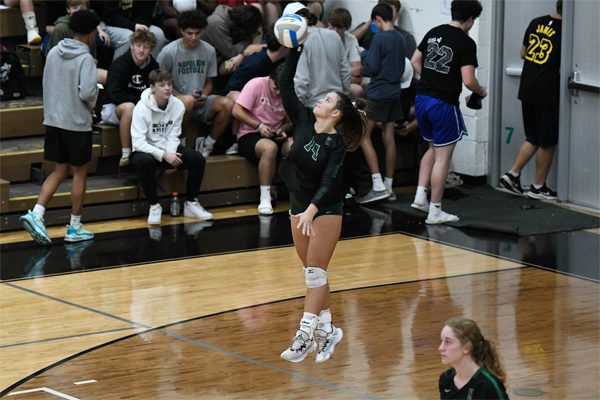 Napoleon High School volleyball player Momo Hampton (14) has helped lead the Pirates to an undefeated season in the Cascades Conference this season.

Napoleon High School volleyball player Momo Hampton is listed as a setter for the Pirates.

But one would have a hard time pinning down her true position.

Hampton served 22 consecutive points in a win over Hanover-Horton earlier in the season.

Most nights she leads the Pirates in assists.

But there are matches where she leads Napoleon in assists, digs, and kills.

That versatility is helping the Pirates have a successful season. Napoleon will be the No. 1 seed heading into the Cascades Conference Tournament on Thursday at Michigan Center.

The Pirates are one tournament win away from winning the first outright conference title for Napoleon since 2013.

Hampton said the good fortune for the Pirates – third in volleyball her sophomore year and seventh two years ago – comes from newfound chemistry between the Pirate players.

“Last year we didn’t have the team chemistry . . . COVID-19 restrictions did that,” Hampton said. “We got started so late, oftentimes getting discouraged that there would not be a season and all of the restrictions that came with COVID,” Hampton said.

“This past summer we started in early June . . . that is a big part of why we are so much better.”

“I think that actually helps us as we are not scary as a team, but we all play together,” Hampton said. “We use all the talent that we have, and everyone has something to contribute.”

Hampton has been contributing to the Pirates volleyball team since her freshman year. She was an all-conference player as a sophomore and a leader on the team this year.

The once self-proclaimed chunky girl from middle school has transformed into a volleyball player who could play at the next level.

“When I was little (middle school), I was really chubby,” Hampton said with a smile. “Every year I have gotten taller and thinned out.”

“I think that has helped me on the volleyball court.” (more below) 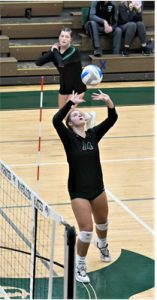 Hampton said lots of conditioning – she played basketball and travel volleyball this past summer – and a solid diet at home has helped put an end to the chubby days.

Momo – officially named Madelyn on her birth certificate – wants to play college volleyball. She shouldn’t have a hard time with the academic side of college basketball as she maintains a 4.0-grade point average at NHS.

Hampton may get her competitive nature from playing football in grades 3-6.

“I loved playing football as I was the quarterback,” Hampton said. “I miss playing it so much.”

It appears as if Hampton will have to settle for being the quarterback on the volleyball court.