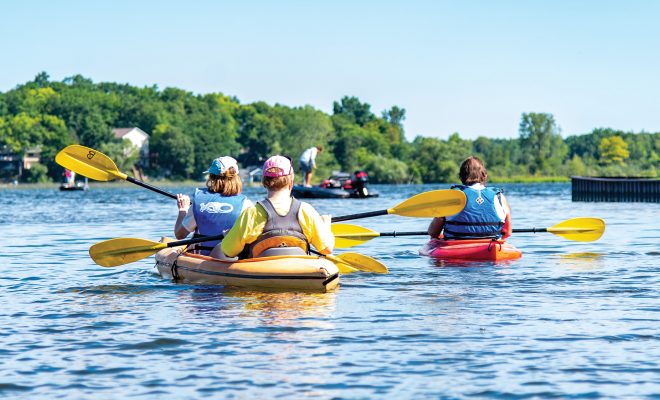 Twenty-two people showed up for the paddle, although GREAT president Kenny Price says, “trips before the pandemic often had several more paddlers. We’ve had 90 paddlers turn up before.” He says this is the year’s first paddle due to high water levels in the spring, but they are hopeful that attendance continues to increase the further we get from the surge in COVID-19 cases.

Price and his fellow team members demonstrated an evident passion for the environment, waterways, and paddling. At the event, paddlers gathered on Grass Lake’s shoreline to listen to safety instructions and guidelines. As kayaks and canoes entered the water, some people received helpful hints on balancing, steering, and how to propel forward through the water. Keeping close to the shoreline, the group explored nature while enjoying the warm but not excessively hot weather. 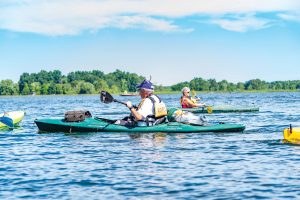 Price says he has always been fond of the water. “I got in a kayak for the first time in April 2007 at an Earth Day event at Cascades Park,” he says. “I had been on water skis and motorboats, scuba diving, and playing in rivers and lakes all my life, but I’d never been on a kayak.” By the end of that week, he’d bought his first kayak. By July, he was paddling with GREAT and joined the board the following year. He was named president of the board in 2011. Eager to help others discover their love for the environment through kayaking, Price paddled alongside fellow adventurers Saturday, readily available to share his wealth of knowledge about Jackson and its waterways.

GREAT is a 501(c)(3) founded in 1990 in the wake of the Grand Expedition. “The first was in 1990,” says Price. “The late Verlen Kruger, a world-famous kayaker/canoeist from Portland, initiated the first expedition.” His long-distance paddling exploits landed him in the Guinness Book of World Records several times and earned him in the American Canoe Association Hall of Fame. “[Kruger] wanted to show off the Grand River to the world,” says Price. “So, the Grand Expedition takes paddlers on a 13-day paddle from Michigan Center to Grand Haven, sleeping on riverbanks along the way.”

GREAT’s dedication lies in protecting and restoring the Upper Grand River Watershed in Jackson County. The group has been instrumental in its defense, perseveration, and maintenance from year-to-year through planned activities and educational programs. The mission promotes river accessibility and safety, optimum water quality, and environmental awareness. 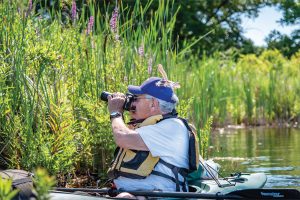 GREAT aims to shed light on the Upper Grand River Watershed and the several ways in which it is unique. Several reasons include the following: At 260 miles, it’s the longest river in the State of Michigan and the second-largest watershed; Jackson County sits on one of the largest aquifers in North America; some of the most extensive remaining wetlands in lower Michigan are in this watershed; the potential in this area for river and lake recreation is enormous, as there are over 200 miles of river waterways to paddle and hundreds of small lakes; the two branches of the Grand River begin at Grand Lake and Center Lake Chain in Jackson County and join east of Jackson dropping 467 feet to Grand Haven on Lake Michigan; headwaters of the Kalamazoo, St. Joseph, and River Raisin are also close.

GREAT’s paddling events intend to educate and raise awareness about the area’s waterways, namely the Grand River. Paddle events are open to the public. A kayak or canoe is free to reserve ahead of time, or paddlers are welcome to bring their own. In addition, GREAT provides a shuttle for river trips for participants’ convenience upon exiting the water. 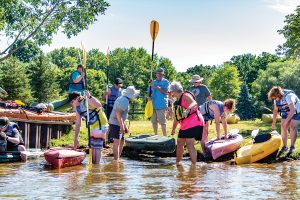 The Annual Grand River Clean-Up event every September is open to the public. GREAT provides canoes, tools, and lunch. Volunteers should come prepared to be in or near the river. Previous clean-ups have pulled everything from the river from tires, bottles, buckets, cans, clothes, furniture, glass, highway cones, plastic, lumber, and pipes.