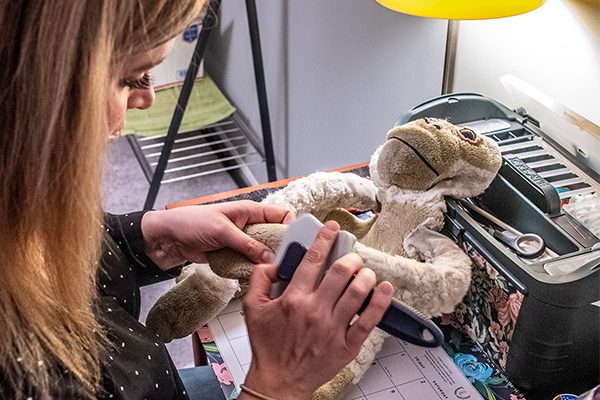 Stuffed companions that find their way to Danielle receive tender loving care throughout the process of bathing, cleansing, drying, stitching, re-stuffing, brushing, and replacing missing details such as eyes.

Many of us own(ed) a special stuffed companion that has remained with us throughout childhood, possibly into adulthood. Danielle Allore-Taylor (pictured) found her calling through her recent business idea. She recognized a need among those of us with long-time stuffed animal friends who have endured a lot over the years. 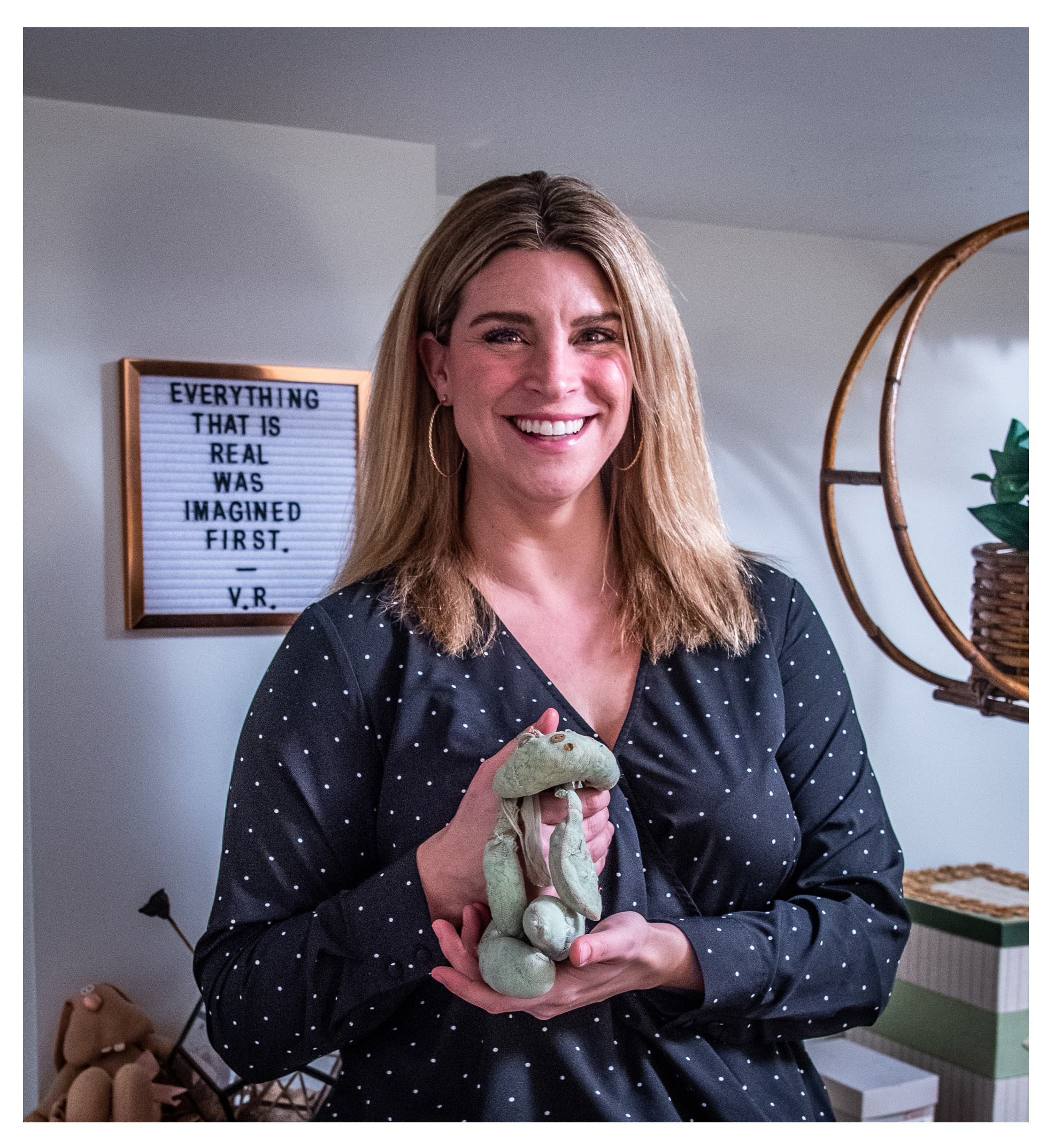 Having temporary lost her job due to the pandemic, Danielle reverted to an old passion and hobby – stuffed animal restoration. “I was always the stuffed animal kid. There was always something stuffed and fluffy in my hands at all times,” she says. Her personal favorite, Rabbit, is still with her after 34 years. Over the years, her mom repeatedly mended Rabbit for Danielle, sewing him over and over again. “She never once told me he was too old or worn, and never once questioned me about getting rid of him – she knew how special he was (and is) to me.”

She initially posted a flyer about her restorations publicly on Facebook, but it didn’t gain momentum. She caught her big break when a woman from Illinois contacted her about restoring her boyfriend’s stuffed dog, Max, as a gift. And so, Danielle’s stuffed animal restoration business, Fluff, was born.

When Max arrived, Danielle decided to create a video of the restoration from start to finish. She posted it on TikTok on December 1 and was shocked when the video “Max” went viral with over five million views. The video was shown on US Weekly, and her videos continue to reach millions of people as they are shared and liked over multiple social media platforms.

To streamline the business end, she developed a website (www.fluffrestoration.com) where people can see examples of her work and inquire about services. Her website also features information about the scholarship restoration fund – a donation-based fund that enables restorations for those individuals who can’t afford the service. Donations can be made through PayPal, and a form on the website allows those interested to see if they qualify for the scholarship.

Stuffed animals are widely acknowledged as emotional companions, as many people take their stuffed buddies with them throughout life’s journeys. Over time, these special friends become tattered, torn, and dirty – stained with tears and disheveled from snuggles and hugs. These physical representations of our soul are evidence of a special bond which is not easily broken. Rather than throwing them out or donating them, people often hold onto them long after they’ve served their purpose. Danielle’s goal is to not only restore the stuffed animals, but also to help emotionally repair the human to which it belongs – a profound service in today’s world.

Dominique Linden sent her teddy bear to Danielle for restoration after hearing about her work. Linden says she has had her bear for about 28 years – “Through my whole life she’s been there in some capacity. Sometimes front and center, other times packed away.” Her emotional attachment with her bear developed over the years, sharing the hardest days of her childhood with the bear by her side.

As an adult, she had placed the bear in storage. “The longer I had her and the dirtier she got the harder it got to look at her,” she says – the stuffed bear was a reminder of hard times. “I had been seriously considering getting rid of her since I was ready to move on…,” Linden states.

She reached out to Danielle as soon as she found out about Fluff, knowing that this was the reason she couldn’t convince herself to part with her bear. “I have felt so much gratitude that it was [Danielle] offering this special service. I wouldn’t have trusted anyone else with it because the emotional ties are so strong,” says Linden. “Now she’s back front and center and she’s softer and her original color again.”

Danielle gently stitches a stuffed monkey’s bowtie back on him after he has been washed and dried, combed and made new.

As Danielle carefully replenishes the fluff within, cleanses the matted fur, and restores each special project to its glory, she creates the hope that humans, too, can have a fresh start. Fluff is about more than mending belongings composed of fabric, thread, and stuffing – it is about mending hearts, too. Linden states, “The work that Danielle is doing is more important than just the surface level, which is already so cool. Inner child work is getting more popular and for good reason.”

This service is more than a side hustle for Danielle, as these belongings are essentially extensions of the individuals they belong to. Each stuffed animal who finds itself in her care receives so much more than mending, stitching, and stuffing.

Note: Since this article appeared in the print version of the Exponent, Danielle has been featured on the Drew Barrymore Show and has been contacted by various news and media outlets to showcase this awesome service.