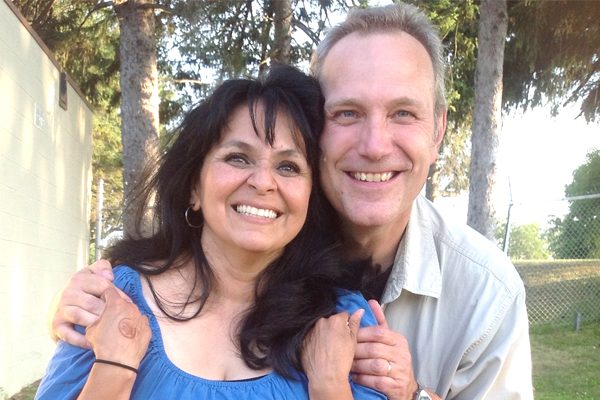 Margarita Berkemeier, a resource room teacher at Columbia, and her husband, Steve, a musician and songwriter, are richly blessed, and a blessing to our community.

Meet Steve and Margarita Berkemeier.  While this area of Michigan – lovingly called the Irish Hills – is blessed with so many kind and giving souls, this couple is somehow different. It is hard to understand just how generous and caring they are because, well, they don’t tell you. They just do it – humbly and quietly.

They were born, four years apart, in the same place: Mercy Hospital in Jackson. Margarita, whose parents moved to Michigan from Mexico, is the baby in a family of 10 children. She was there, as an interpreter for her parents, when they became U.S. citizens

“It was very humbling, very beautiful,” Margarita tells us. “My mom had a really hard time. The agent she had asked some very tough questions, like ‘Name all of the current Supreme Court justices.’ She was not a kind agent. But Mom somehow made it through.”

Margarita then went out to the lobby to get her dad thinking there is just no way he was going to get his U.S. citizenship with this tough agent.

“We went into the exam room and there was a brand new agent for dad,” she recalled. “He asked questions like ‘What do you celebrate on the fourth of July? And, ‘What are the colors of the American flag?’  Dad was so excited that he was acing all the questions that, when asked if he would be willing to take up arms to defend his new country, he jumped up and yelled ‘Yes! Right now! Today!’  So I was present when both my mom and my dad became U.S. citizens – and it was very humbling and memorable for me.”

Steve also grew up in Jackson and graduated from Lumen Christi High School. His dad was a soldier at Pearl Harbor on December 7, 1941; the day 2,300 soldiers lost their lives.

“It was always a humbling experience when I read about Pearl Harbor in school and saw the devastation,” Steve remembers, “And to realize that by the grace of God, somehow my dad survived.”

The blind date and marriage

Steve, an aspiring musician with a love for entertaining large audiences, and Margarita, a self described introvert, are about to meet. Their mutual friends had been pushing hard for well over three months for this moment. Steve, always quick to remember important dates, pegs it at June 9, 1985.

“I was not a very social person,” Steve shares. “If it were not for our friends pushing so hard for the two of us to meet, we never would have met.”

“It was love at first sight for us,” mused Margarita. “As the years go by, we realize how blessed we have been. What a great journey!”

The couple became engaged a year after that blind date. Then a year later, they were married.  They have been blessed with five beautiful children. 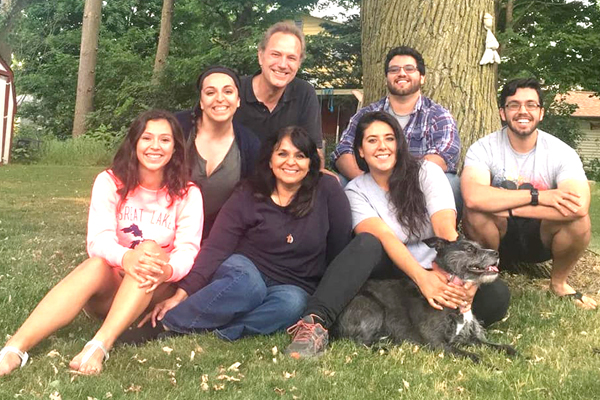 Early in his career, Steve worked as a disc jockey at a small local radio station, WJCO in Jackson, where he got to meet some celebrities like Tommy James and Ricky Nelson.  A move into the sales department did not go as well.

“I was low man on the totem pole selling radio advertisement time,” Steve says. “I realized I was not good at it but managed to stick around for a few years and not get fired. My biggest sale was a remote broadcast from a chicken farm on Caddy Road. It was more like a yard sale. They actually set me up inside a chicken coup for the live broadcast.”

Margarita, who worked a few years at the Secretary of State in Lansing, ended up working at the Jackson State Prison when it was the largest walled prison in the world. She worked as a secretary in the warden’s office.  She was asked to be a translator for a new prisoner that did not speak English. They took her into the cell block area where, in the middle of the meeting with this prisoner, all the lights went out in the prison.

“When the lights went out all the officers kept yelling, Prisoners – make yourself known!  Make yourself known!” she exclaimed. “But [this prisoner] was not making himself known. I remember thinking that this is not going to end well for me. When the lights returned a few moments later, I found myself surrounded by a wall of correction officers and they quickly shuffled me out of the prison area.”

Margarita went back to school and is now a Resource Room teacher at Columbia Elementary School. She is fluent in English, Spanish and sign language.

“I have the best job in the world,” Margarita tells us. “I work with families whose students have individualized education plans (IEPs). I get to work with the most exceptional students and feel so blessed every day to do this.”

Margarita, when she’s not pouring herself into helping her students, spends her free time taking care of her kids and her 90-year-old mom. She routinely volunteers during the summer months to come back to CES to tutor her students so they don’t get behind over summer vacation.

Steve, throughout his singing career, volunteers to sing at area nursing homes. He often goes into the rooms of people too sick to come to the meeting room where he sings. He keeps track of the people he meets, how they are doing, and what songs they love. They become his friends.  He was invited by a family to sing at the funeral of one such friend.  He quietly takes all the money he earns from paid singing jobs and gives it away – all of it –  to people that are in need, people that may be hurting – in an envelope so they never know who helped them.

“There were times, with five children, that I wanted to say we need that money,” Margarita would say. “But I realized that this is his ministry. This is how he does God’s work.  And I’m so proud of him. There were times that we could not afford to attend the church breakfast, choosing instead to eat at home.  Now Steve purchases the breakfast tickets and passes them out to the needy kids at church so they don’t have to miss out.”

These are their passions. Margarita says she is so blessed to be able to touch the lives of her students – to give to them. She is thankful to God for placing her in such a wonderful career where she can reach out and make a difference.

“I feel very honored to be involved in the lives of these children,” she says. “I truly, truly see all the goodness of this world in my students’ faces. I feel like I am living what I was called to do.”

Steve wrote a song a long time ago, about his life growing up in a large family. It is called the Seventh Son. He says the last verse, now more than ever, summarizes his life now.

“Richly blessed with unworldly treasures, a charmed life with simple pleasures. He sent the good Lord’s finest gifts to the Seventh Son.”

Quiet. Humble. Giving. It is a life well blessed!