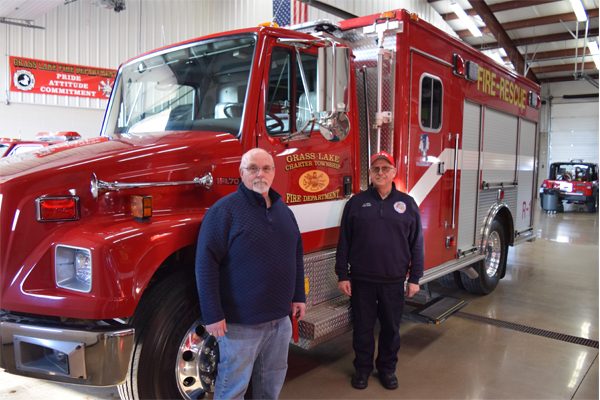 Grass Lake Charter Township Supervisor John Lesinski and Fire Chief Greg Jones stand by fire truck Rescue-1. That truck was built in 2002 and has seen its better days. Fire trucks have a certifiable life of 21 years. It would be replaced if the township’s fire department millage is passed on May 3.

There comes a time when a fire department needs an influx of funding to keep operating the way it should with reliable apparatus (fire and rescue trucks), turnout gear, and other necessary equipment – not to mention the personnel needed to run the department. For Grass Lake Charter Township, that time is now.

“Our existing millage expires – it’s at the five-year point,” said Fire Chief Greg Jones. “We renew every five years.” However, this year’s millage request is not simply a renewal – it involves a millage increase that voters must pass to keep the department operating at levels residents have come to expect. The township will be asking voters for a 1.64 mill request for five years on the May 3 ballot.

“We have two vehicles that are getting to the point where we need to replace them,” noted Jones. Those vehicles are a 1993 Ford F-350 that has served as a medical vehicle and a utility vehicle, and a 2002 rescue vehicle known as Rescue-1. However, the millage is not just for vehicles – it is for all aspects of operating the township’s fire department.

The last time the township asked for an increase in its fire operating millage was in 1997. At that time, the requested millage rate that was passed by voters was 1.5 mills. Since the Headlee Amendment rollback, the millage rate has rolled back to the current rate of 1.1849 mills. (more below)

“We’re hoping this is going to pass so we would be collecting the 1.64 [mills] in Winter of 2022,” said Township Clerk Cathy Zenz. “We know Headlee is going to affect it again. For a few years anyway, we’ll be able to collect that 1.5 before it starts rolling back down.” Historically, the township has asked for a fire department operating millage every five years, she noted, but with no increases in the last 25 years.

“When the five-year period comes back around, we’ll be able to ask for a renewal at 1.5,” added Jones. “We’re wanting to go back to where we were.”

“The extra .4 will help us catch up to what we’ve lost the last four, five, or six years,” said Township Supervisor John Lesinski.

If the millage fails, Zenz says the township has one more year to collect at the 1.1849 mill rate – or whatever the Headlee rollback takes it down to – on the Winter 2022 tax bills. “After that, we’ll have to go for a millage again,” she stated. “If it doesn’t pass, then we won’t have a fire department. The fire department is strictly funded by our voted millage. Historically, it’s never been turned down.”

some of the old turnout gear that needs to be replaced.

Since 1997, there have been many steep cost increases. The cost to outfit fire personnel is now $8,450 per person (pager, radio, and required turnout gear – firefighter coats and pants). Just over the past five years, the department has seen exponential increases in several line items:

In past years, the township has paid cash for all of its new vehicles by planning ahead and allocating $75,000 each year from the fire department’s operating money, knowing that a fire truck should be replaced every 21 years. However, due to the cost increases in the day-to-day operation of the department, the amount allocated for vehicle replacement has taken a hit the past four years and has been reduced to $10,000 from $35,000 per year.

“We had it where there was enough money coming in so every three years, we could replace a vehicle and stay ahead of the game,” noted Jones. “But we weren’t able to do that the last two or three years due to the fall of the amount of millage money coming in,” Jones says a new rescue truck will cost in the range of $250,000 to $300,000. (more below)

Add to that the fact that every 10 years turnout gear has to be pulled out of service, he said. If it’s not and the department uses old gear, state fines may come into play. “As we do our budget each year, we’ve put money in certain line items to take off that stuff – whether it’s helmets or boots, or whatever, so it’s not a big burden, and all of a sudden you need all that stuff,” Jones said.

A majority of residents’ property tax money goes to schools, county government, libraries, and other units of government. In Grass Lake Charter Township, 4.8 percent of the total tax collection stays in the township. In 2021, the total township tax collection was $10,745,046. Of this amount, the fire department received $329,384 and the township’s general fund received $188,411.

The township’s fire department does not rely solely on millage money to operate. The department has occasionally applied for grants, more so in the past couple of years, to help purchase needed supplies and equipment and cut the cost to the taxpayer. The grants require a minimal match from the township.