Minghine won’t back down from a challenge 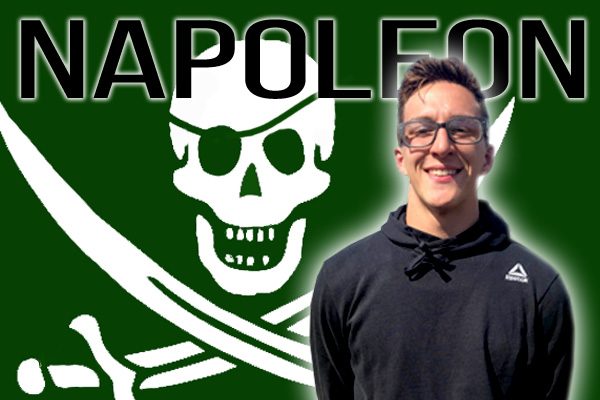 Napoleon Pirate Zach Minghine, above, is Knutson’s Student-Athlete of the Week.

Jujutsu is a Japanese form of martial arts that dates back to the 1300s. Jujutsu is a close combat, intense sport that takes incredible dedication. Napoleon Pirate senior Zach Minghine takes this very dedication all the way to the track.

Minghine runs the 100 meter dash, 200 meter dash, and participates in the long jump. In a pinch, Zach can also be inserted into any sprint relay. In fact, Minghine recently had to fill in the anchor spot for the 4 x 400 meter relay at East Jackson in an emergency situation. Minghine responded with a 53 second time, helping the team the East Jackson Dome Invite. Napoleon Track Coach Tom Gunnells spoke on what he thinks he has for an athlete in Zach.

“He’s a gamer. Coming into the season, we never thought he would be able to run anything longer than a 200, but I needed someone for the relay and I knew he could do it.”

Minghine takes his jujutsu talents to the wrestling mat in the winter as well. The Pirate talked about what jujutsu means to him.

“The brotherhood that I feel in jujutsu is amazing. Learning from other people and building yourself is important to me.”

Zach describes himself as a hardworking individual with no offseason. He thrives by working year round. Running the short distance events make every second crucial, and there is zero room for mistakes. One slip up can mean the difference between first place and last place. Even the 200 allows no mistakes in the short 20 to 25 seconds. Zach explained his mindset for the events.

As a team, the Pirates want to compete for their conference title. The team is loaded with seniors, specifically in their sprinting department.

Minghine’s biggest influences are his brother and jujutsu. His brother has always been there by his side to work, and has always motivated him to be his best. He credits jujutsu for the amount it has helped him grow as a person.

After high school, Zach plans to enlist in the Marine Corps. With his hard work and discipline, there is no doubt the Marines will be lucky to have a young man of this caliber.

After the East Jackson meet, everyone realized what a fighter he is, and that he will never back down to any challenge.

The Brooklyn Exponent and Knutson’s Sporting Goods wish Zach the best of luck moving forward and thank him in advance for his service!