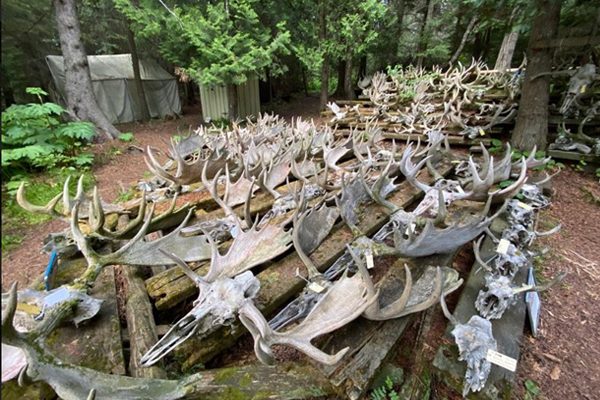 Teaching on the fragility of ecosystems, a Grass Lake teacher travels to Isle Royale National Park and is using the experience to teach her students a little of how the world works.

Editor’s note: Grass Lake fifth grade teacher Dakota Bahlau recently traveled to Isle Royal National Park to participate in a program called Moosewatch for Educators. Below, Bahlau details how she is using the experience to teach her students about the fragility of our ecosystems, and the importance of seemingly insignificant individual components.

“Those who walk on two legs have an innate fear of the call of the wild. Whether it be something still ingrained in our genes from long ago or the sheer fear of the unknown, untamed spirit of the mountains. Though the mountains fear not the eery melancholy sound of the wolves’ call. Rather, they welcome it as one would an old friend. Surprised many would be to hear such a thing, as who would not fear the teeth and fierce green eyes that linger in the dark. No, no the mountains fear something much greater . . . a soundless night. What some would deem safer, do not know the true dangers that lie ahead. When silence falls upon the night, so too does any hope for the future of the mountain.”

Aldo Leopold was the inspiration for these words I wrote while on an island in the far north, under the glow of lamplight, as the hum of mosquitoes deafened all other sounds save for a pencil on paper. This sentiment that one species could essentially save all others, and to go so far as to change the actual landscape is not as far-fetched as it sounds. Much evidence of this can be seen in Yellowstone and the lesser-known National Park, Isle Royale. 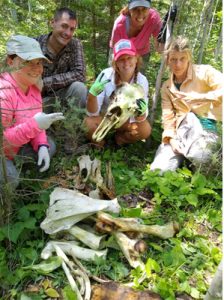 Using GPS coordinates to get us in the vicinity, the team found this moose. Dakota Bahlau is pictured in the middle, holding the skull.

Isle Royale is the least visited National Park and the number one revisited out of all the National Parks. Lying in the center of the archipelago, Isle Royale runs 42 miles in length and is 9 miles wide. This summer I had the opportunity to explore just a portion of this hidden treasure Michigan has to offer. I participated in one of the longest-running Predator-Prey studies ever being conducted worldwide: Moosewatch for Educators. Our job was to seek out remains of dead moose, collect data on their demise, and pack out the bones (if able) to add to the largest curated collection of moose bones at Bangsund Cabin, Isle Royale.

You are perhaps wondering why such a study exists, and what information could be gathered in such an isolated location. However, the isolation of such a place is what makes it so unique. One simple change could reverberate through the entirety of an ecosystem like a seemingly innocent ripple that could affect the whole lake. Think, for example, if the wolves were no longer a part of this ecosystem. The moose, not kept in check, would overpopulate, overeating much of their food. The vegetation would not have time to regrow, thereby falling victim to erosion (the washing away of all the good nutrients). Decimating the producers, the other consumers would have nothing left. The once healthy island would be no more, all due to the absence of wolves. An overgeneralization . . . sure. A certain future, perhaps, and one I hope we may never see. 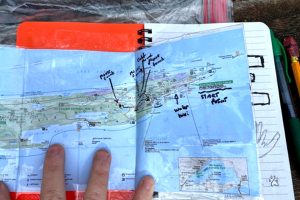 This field map details where the moose we found were located on our expedition.

The change of blood and genetics of the wolves of Isle Royale was once as common as the winter seasons. However, this influx of new blood melted away along with the ice bridges that once formed nearly every season. Ice bridges are necessary to bring Isle Royale out of isolation if only for a while. Climate change, however, has forever altered the future of Isle Royale. As a result, the question was asked, do we intervene or let the island fall silent?

My fifth-grade students are currently learning about the importance of a balanced ecosystem in class. Much of these discussions are centered around my time at Isle Royale. In doing so, my students are receiving a much greater, real-time understanding of how fragile an ecosystem really is regardless of how diverse such an ecosystem can be. My students, like others, talked about taking wolves and bringing them to the island, which is what happened with Isle Royale. One student went so far as to discuss what would happen if we took wolves from another ecosystem and how their absence would affect that one. Such connections and ideas from young minds never cease to amaze me. Although I may be the teacher, I always enjoy the opportunity to become a student. The students now are young stewards and future caretakers of our planet.

We can sometimes take for granted how much of an impact our small actions can have on the world around us. No one thing will help keep our ecosystem balanced, rather it will be many small things from many people doing their part. My job is to teach in hopes my students will teach others. Perhaps one day they will make their way to Isle Royale and understand, even more, just how great this small island is in the grand scheme of things.

Moosewatch Expeditions are not just for educators. If interested in backpacking on Isle Royale and becoming a citizen scientist, go to: https://isleroyalewolf.org/participate/participate/explorers.html.