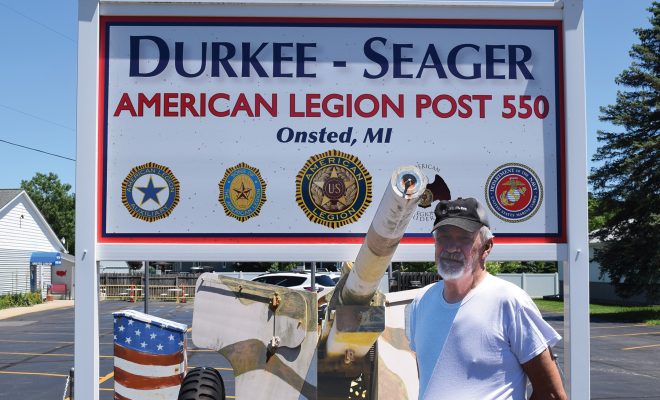 The Onsted American Legion Durkee-Seager Post 550 celebrated its 75th anniversary on Saturday, June 25 with a huge party. All American Legion family members and the public were invited to join in the celebration.

Post Commander Bill Arnett kicked off the festivities at noon, followed by a presentation by Legionnaire David Loop from Post 97 in Adrian.

The fun included food by Chubbyque, a dunk tank, kids’ games, cornhole tournaments for both kids and adults, and an adult beverage tent. Luc-e-Lu the Clown provided face painting from 1 to 3 p.m. and from 5 to 10 p.m. the party continued with music provided by Arnett & Bacus and Stray Shot.

A little history of the Onsted American Legion

One of the namesakes of Durkee-Seager Post 550 goes back to World War I when the Onsted community was shocked to learn about the death of one of its favorite sons, Frank Durkee. Durkee, only 16, died on Oct. 16, 1918, from wounds received in action. Durkee had left for overseas in February 1918. A newspaper clipping from that time states, “Inasmuch as his parents had not received a letter since the one published in these columns October 24, 1918, and dated September 7, and he had not written regularly before, there seems to be no doubt, but that Frank was wounded soon after writing this letter.”

It continued, “In his letter, he speaks of anticipating further hard fighting and said, ‘It has been some time since I wrote, and I may not have time to write soon again.” The clipping further states, “Some of the hardest fighting on the Western front was done by the Co. B-boys and many have lost their lives. Private Durkee is the second local boy to have made the supreme sacrifice. Byron Furgeson was killed in action several months before. He, too, was a member of Company B.”

Private First Class Donald Seager, 20, was killed in action while serving in World War II on Nov. 16, 1944, while serving in the anti-tank division of Patton’s Third Army. He was posthumously awarded the Silver Star for his part in attacking a German pillbox that was holding up the advance of U.S. troops. The citation reads: “For gallantry in action against the enemy Nov. 16, 1944, in the vicinity of (censor), Private First Class Seager volunteered to accompany his squad leader and another volunteer in a bold attempt to demolish a (censor) pillbox obstructing the attack . . . In the intrepid act of placing the explosive where it would prove most destructive to the enemy Pfc. Seager was killed by German fire. The exemplary fortitude and resolute devotion to duty were displayed by Pfc. Seager and reflected lasting honor upon him . . .” 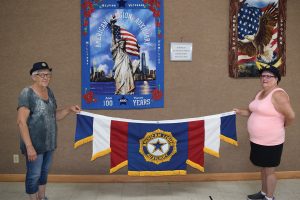 Linda Arnett left, is the Durkee-Seager Auxiliary vice president; Carla Pohl, right, is the current president. The two living charter members of the auxiliary are Marcella Barricklow and Doris Morningstar-Bayes.

In the February-March 1997 newsletter of the Legion, on the eve of its 50th anniversary, then-Finance Officer Thomas Cattell shared some history of the Durkee-Seager post. In April of 1947, the year the post started, William Marr, while talking with fellow veterans, conceived the idea of a veterans’ memorial home in Onsted. “With the stamina of youth in the veterans of World War II and the firm backing of veterans of World War I, plans began to take shape,” wrote Cattell. Veterans of the surrounding communities were notified of a meeting to be held in May of that year at Jack and Warren Marr’s Cities Service Garage on Main Street. Many veterans were present at that first meeting and were “quite in favor of organizing a club. As the American Legion was the largest of veterans’ organizations, and the majority of the veterans of the community would be eligible for membership, it was decided to form an American Legion Post. The veterans present decided to name the post after the first casualties of World War I and World War II, Frank Durkee and Donald Seager, respectively.

On June 13, 1947, the new Durkee-Seager American Legion Post 550 was issued a temporary charter with the names of 27 new members. After several months of hard labor and money contributed by members, as well as help from community businesses, the first Post 550 building was open to the public and dedicated on Dec. 21, 1947.

That building lasted around 40 years when a fire destroyed it in February of 1986. Current Post Commander Bill Arnett said a new building was started in 1986 and was completed and dedicated in 1987. “I thought it would be nice to have a celebration to let everyone know we’re still here,” said Arnett.

Some of the current activities of the Durkee-Seager Post include their annual Memorial Day parade with a series of five ceremonies at five cemeteries, Flag Day flag burning, sponsorship of Boy Scout and Jaycee activities, rifle team sponsorship, school Veterans Day presentations, a Christmas party for kids, and of course their food and bar service at the Post on Tuesday, Thursday, and Friday from 3:30 to 7 p.m.

The Legion’s Durkee-Seager Auxiliary was started the year after the Legion post was started – in 1948. Carla Pohl is the current president. Their mission is to serve their veterans and their families, Pohl said, as well as the community. Past President Bonnie McJennett added that they help families of those in active duty as much as possible as well.

The auxiliary also assists with school and Chamber of Commerce events. They also give scholarship money to the Kiwanis Club. They also hold a Christmas Veterans Affairs gift shop program for veterans and their immediate families, funded by their poppy donation program.