Onsted students learn about the Constitution 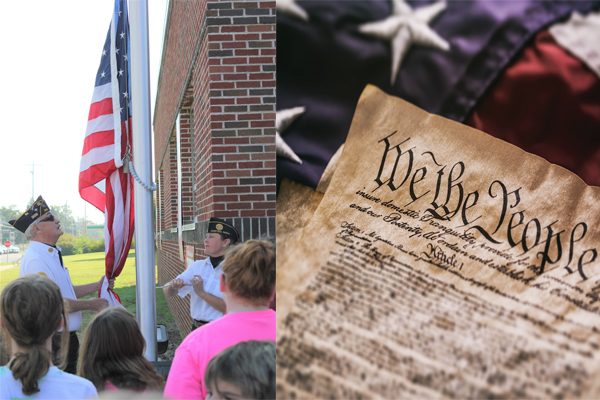 Above: Commander Bill Arnett and Second Vice Commander Audra Micon began a ceremony demonstrating proper etiquette during the National Anthem as well as how to salute the flag. 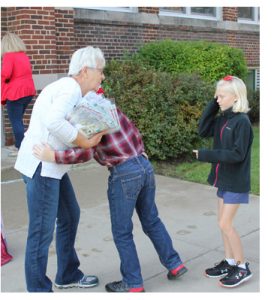 Durkee-Seager American Legion and Auxiliary Post 550 dedicated the new Onsted Elementary flagpole with the fifth-grade class, as one part of the classes’ Constitution Day studies.

Fifth-grade teacher Teri Mapes coordinated the activities with Auxiliary President Carla Pohl. Mapes’ goal asking the vets to visit was “to help students explore proper flag raising, flag pledging etiquette, how veterans have contributed to U.S. citizens’ lives, and why we should be grateful we live in America.” (More below)

Above: After receiving a Constitution day packet, one-fifth grader spontaneously gave Linda Arnett a hug along with hearty thanks. 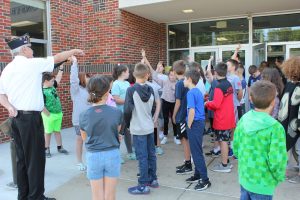 Mapes and the fifth-grade team of Matthew Rivera, Miranda Amthor, and Sarah Kope gathered their classes outside for the flag-raising and then partook in question-and-answer breakout sessions. Post Commander Bill Arnett, second vice commander Audra Micon, and veteran Kris Micon were on hand to answer questions. (More below)

Second Vice Commander Audra Micon answered questions from one group of fifth graders. After numerous questions regarding boot camp to service, one young man asked if she had read a specific book about the military. She answered, “No, would you recommend it?” The young man answered in the affirmative and gave a brief rationale why.

Student’s questions ranged from boot camp to the various jobs and experiences the vets had during their service. Several students shared about their family members’ duties in service, and the emotions that come with a family member serving. One student shared honestly that she hadn’t gotten to know a family member well because they were away so long. Several commiserated with Micon when she answered the worst part of being away was missing family. Other students were curious about how it worked as a female in the military and others asked Commander Arnett about weapons. He clarified that not everyone in the military shoots a gun as part of their job.

As students were returning to class, they were presented with Constitution-day related packets compiled by Auxiliary members, which included a flag, lessons on flag etiquette, and other items. Pohl thanked Congressman Tim Walberg for sponsoring copies of the Constitution packets. (More below) 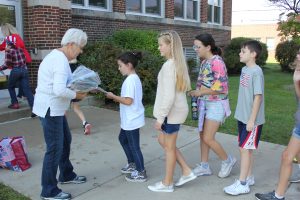 Principal Davis commented, “Thank you to the community for passing the bond which made it possible to obtain and install the flagpole, lights, and new cement. We are so grateful for the ongoing partnerships with the vets, legion, auxiliary, Kiwanis, and so many other great people.”

Davis broadcasted the flag-raising for the entire Elementary community.