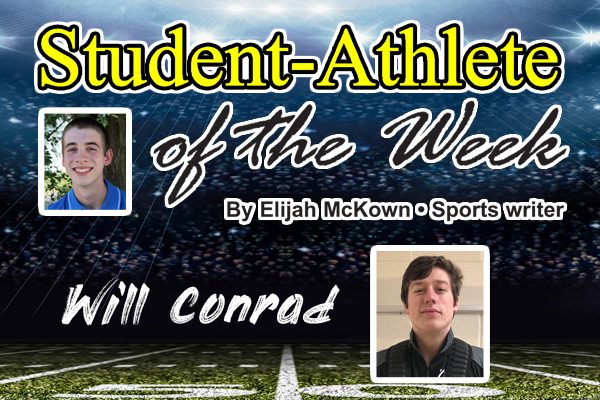 “Will is one of those guys who runs through a wall for any coach he has ever played for.”

While many student athletes struggle with sharpening their skills in one sport, William Conrad is working on mastering three. A senior at Onsted High School, Conrad is a member of the football team, basketball team, and track team. Not to mention that he is the captain of all three!

To play three sports, an athlete must be able to absorb information quickly because of the short amount of time one gets to practice. For William, this is no problem. His basketball coach, Brad Maska, spoke on his ability to learn so quickly.

“He’s a very smart, knowledgeable kid who listens very well. When you tell him to do something, he does it.”

Not only must a three-sport athlete learn fast, but he must work hard. William is known around the halls of Onsted for his hard work ethic. His biggest motivation is his teammates.

“One of the biggest reasons I play so hard is because I cannot let my teammates down,” he says.

“Will has been a friend and teammate of mine for years, and he has a tenacity that I have never seen anywhere else. He is easily one of the hardest working individuals I know and has great enthusiasm that lifts the team up.”

“He’s one of the few guys in my coaching career that you do not have to get motivated for practice. He comes to work every single day. Will is one of those guys who runs through a wall for any coach he has ever played for.”

Currently, the Onsted varsity basketball team is performing at a high level as it is tied for second in the LCAA. The team is playing the best basketball it has played all season with big wins over LCAA rivals Blissfield and Hillsdale. Conrad has been a key member of the team as one of the first players off the bench.

“We’ve got a chance to win the league this year and win a district title, so that would be our number one priority,” he noted.

Being a teenager in today’s society means seeing many highlight tapes of professional athletes and five-star recruits. William had one clear player in mind when asked who he tried to emulate.

“I truly appreciate the game of Giannis Antetokounmpo and his many tools he brings to the floor,” he said.

All of Conrad’s hard work is paying off. He recently accepted an offer to play football at the Division Two level for Hillsdale College. Coach Maska was ecstatic for his player’s accomplishment.

“I’m really happy and excited for Will because he has all the necessary attributes to succeed at Hillsdale.”

With Conrad accepting this offer, it is also evident that he excels in the classroom, as Hillsdale College is considered to be one of the most prestigious colleges in the state of Michigan. William ranks near the top of his class, but with the humbleness he carries, he would be the last one to brag or act smug about his accomplishments. While undecided on what he may study, the senior from Onsted clearly has a bright future ahead of him.