Those Bird babies: Round Two is coming up! 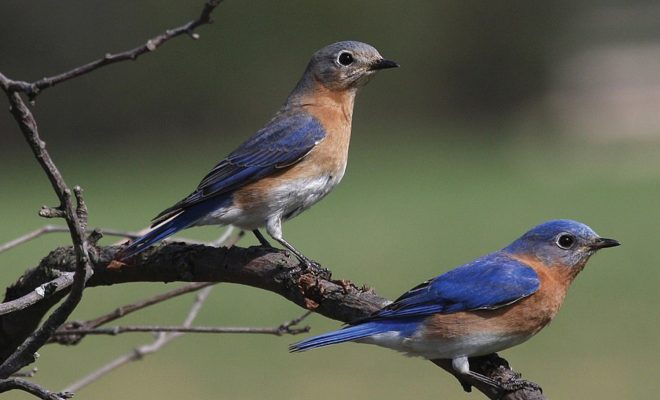 I have a friend that really likes ice cream. He is a regional manager for a staffing company and told me that one of his offices in the Detroit area sits right across from a Dairy Queen. One hot day he decided to cool off mid-morning and get a vanilla ice cream cone. Later that day around lunch time, he wanted to go again so he treated his office staff (and of course, himself) to another round of ice cream. He needed another excuse to visit the dairy Queen a third time that day so he said to himself “I’ve got a two hour ride home, it’s been a long, hot day and by golly, I deserve some more ice cream.” So that is exactly what he did. He told me later that he would try to cut down, but every time he looked out his office window there was that ice cream store, calling him over like a siren of legend, luring him in to the point where he could not resist. He also said he only visits that particular office once a month-probably a good thing. He mentioned that being over 50-years-old, his waistline seems to grow too easily.

Yes, too much of a good thing may not actually be good, but there’s one thing I never get tired of: Watching my birds, especially when they have babies. Do you want to have fun while watching and learning about nature? Put up bluebird or Jenny wren houses and you’ll have something you can enjoy for years to come.

Okay, you might be thinking to yourself “Haven’t the bluebirds already built their nests?” The answer is yes they have, in early to mid-May. Here’s the good news: Bluebirds and wrens have two broods a year, so if you act now, you’ll have chance to have birds making a home at your home.

You can buy ready-made wren or bluebird houses at a hardware store or even online, but I like to build my own. I like to put hinges on the roof so occasionally I can lift it up and see the eggs and the babies. For bluebirds, the dimensions of the entrance hole should be one and a half inches. The house should be about 12 inches high, with the placement of the entrance hole six to ten inches above the floor of the house. The dimensions of the house should be around five by five inches. 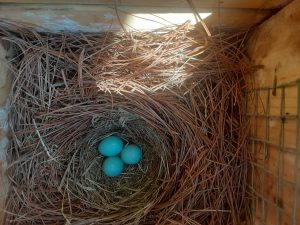 The chicks will need a way to climb out when they leave the nest, so you’ll want to put a “chick ladder” on the wall below the entrance. I usually cut

out a piece of hardware cloth and cut off the ends because they can be sharp and might hurt the chicks.

There are two things you can do that are very helpful to prevent loss of eggs or babies. First, NEVER put a landing/perching rod below the entrance. While it makes it easier for the bluebird to land, it also gives predators something to hold on to while reaching in and either eating the eggs or chicks, and aggressive sparrows will also use it to reach in and destroy the eggs. Secondly, place a predator cone below the nest so raccoons and other predators won’t climb in and steal the eggs or chicks. I also put strong clamps above and below the cones, because raccoons or opossums will sometimes pull them down.

Next, place the nest around four to five feet off the ground and facing east to southeast. Another thing to attract them is to place a bird bath nearby and perhaps some mealworms. One of the things that I do to attract them is to put a few mealworms on top of the house. Remember, just a few, because too much and a starling might spot them and steal them.

The male is a good hubby, helping feed the female while she is on the nest. When looking for a suitable nest he will often place bugs on top of the nest house for the female to eat and to attract her to the home. Yes, the male “wines and dines” the female with this type of lure, hoping she will breed with him and build her nest. The male will sit on top of the nest as if he’s claiming it, often turning around to watch for other males or competing birds such as starlings and sparrows. If a female arrives she will eat the bug and inspect the nest, often several times before she decides. Just like human females: Of momma ain’t happy ain’t nobody happy. She makes the finale decision. So, by me placing mealworms on top of the house I’m helping a brother out!

Dimensions of the house are about the same for wrens as a bluebird house, although you could have it smaller. The size of the entrance hole is key; it needs to be one inch in diameter, so no other birds except a Black-capped Chickadee can enter it. But the chickadees only have one brood a year.

If you have the room, it helps to place several birdhouses around your backyard, around the edge of trees or bushes. The male will sing all day and place a few twigs in each house and, again, momma bird decides which one to build her nest. She will build it with twigs and then line the back with pine needles and grass. Often the male will try to help, but I have seen where she will go in and actually throw out some of the twigs the male placed inside. It’s like her saying “No-no, the couch doesn’t go there!” 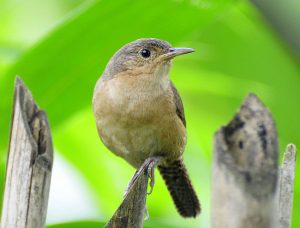 Sometimes she will try to put in twigs that are too long to fit in the entrance hole. She will make several attempts until she drives it inside.

By the way, wrens eat a lot of bugs, dozens a day. Native Americans utilized wrens for fly and insect control by placing hollowed out gourds above where they dumped their garbage. The wrens put their nests in them and ate the bugs. Many people put several wren houses around their garden for natural insect control.

So, you can help the wrens and bluebirds out while enjoying nature. They are fun to watch and kids and neighbors will enjoy it too. You can watch for hours as they build their nests and feed their babies. And unlike ice cream, you don’t have to worry about your waistline getting bigger.