Beat the winter blues and get some exercise! 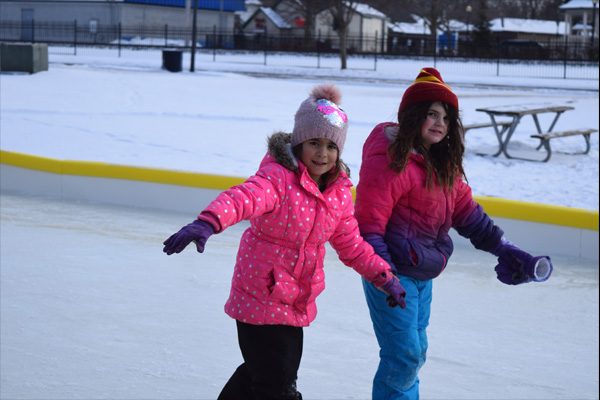 Lenna Caro and her friend Maizie hold hands as they test out the new ice rink in Grass Lake. “I’m hoping that it’s a place that people can come and be outdoors, get fresh air, get some exercise, and gather in a safe place.” Cindy Caro, Grass Lake resident and committee member who helped build the community’s new ice rink.

People looking for some winter exercise now have a new option in Grass Lake – it’s time to lace up the skates and get ice skating. A new skating rink was built just outside the pavilion at the Grass Lake Community Events Park. It opened this past Saturday. 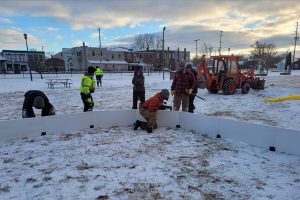 A grant provided funding, as Grass Lake is one of the Chelsea Wellness Foundation’s 5 Healthy Towns. The GLCWI was formed as part of the coalition. The program’s goal is to enhance wellness opportunities in and around Grass Lake.

Under this initiative, the Grass Lake community benefits through unique expertise and funding in areas of wellness, including opportunities to eat better, move more, make positive social connections, and avoid unhealthy substances. As such, the ice-skating rink gives sustenance to the coalition’s goals to provide a healthy atmosphere for community members. 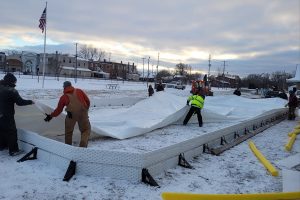 Jim Howe, who was instrumental in the process from the beginning, says the first step was submitting a request for the ice rink. The GLCWI is composed of a committee of volunteers who can vote on the allocation of funds if they attend at least half of the meetings. The rink cost about $3,700 – the only costs being the product itself and reimbursement of Grass Lake Department of Public Works employee time.

Once the GLCWI approved the ice rink, it went to the Chelsea Wellness Foundation’s 5 Healthy Towns’ board for final approval. “They’re a great group to work with,” Howe says. 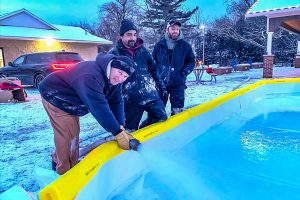 GLCWI leader Dawn Cuddie, who played an essential role in facilitating the project, credits several volunteers for donating their time and efforts. Early discussions about the rink at wellness meetings led to several volunteers – including VFW members and families of GLCWI members, as well as DPW employees – who, together with their time and resources, built the rink in one afternoon.

Cindy Caro, a member of the 5 Healthy Towns coalition and Grass Lake community member, says, “Since I have little ones that would benefit from [the ice-skating rink], I volunteered my husband [Steve] to help set it up. My husband and I helped put a crew together, as well as a lot of the Grass Lake village [employees].” (more below)

Howe says the rink was initially going to be installed at the township office’s property, “but it made more sense to have it closer, in the village, so it’s easier for the kids to get to.” The DPW suggested placing it in the events park in front of the pavilion, providing visibility and easy access. So, on Jan. 23, Village President Joe DeBoe scraped snow off the grass to make a flat, level surface with a John Deere tractor and a back blade.

The purchase of a NiceRink ice rink ‘kit’ streamlined the process. “It’s like Legos – you have four-foot-long sections, probably two feet high, that snap together,” says Howe. The sections make up the border, which brackets reinforce. Next, a liner is spread out and secured, as it would be in an in-ground pool. Howe says, “It was just a matter of laying it all out; [the kit] was an excellent product.” 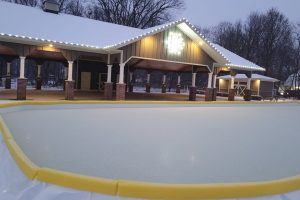 Once the side walls are standing and secured and the liner is laid out and attached to the top edge, a two-and-a-half-inch water hose from the fire department fills the rink with water directly from the fire hydrant. Filling the rink with about six inches of water took about 45 minutes. Howe says the water took four days to freeze completely.

Since the ice will soften with use, making the rink challenging to skate on, volunteers will help keep the snow cleared and the surface maintained. Howe says there is a water spigot within 100 feet that volunteers can use to top off the rink to smooth it over. 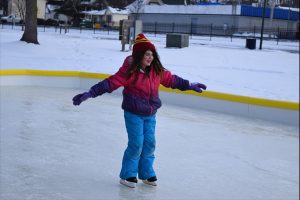 Howe notes, “We’ll know after this year where we made mistakes.” The rink will come down in the spring, and the DPW will store its parts safely until it is reassembled next winter, albeit earlier on in the season than it was this year.

“It was very nice that they were able to put something like this together,” says Howe. Numerous comments about the rink generated on a post created by the GLCWI Facebook page attest to the community’s excitement. “Thank you, thank you, Grass Lake! Absolutely love this idea. Safe and fun place to be. Kudos to all!” commented one user. Others remarked, “Great little community,” “So exciting,” and “very COOL!” 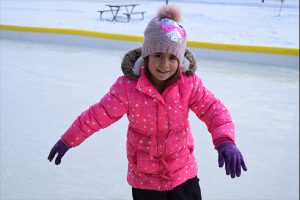 Caro was spotted at the Community Events Park Saturday, watching her daughter and a friend try out the new rink, the first weekend it was available for use. She says she hopes to coordinate some events at the ice-skating rink next year – possibly a high school night with music. 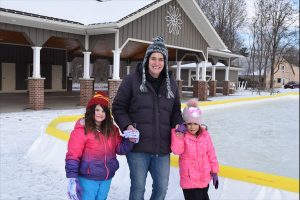 In addition, Caro plans to utilize the ice-skating rink as an opportunity for the students she homeschools to meet up and play with other kids outside. “I’m hoping that it’s a place that people can come and be outdoors, get fresh air, get some exercise, and gather in a safe place.”