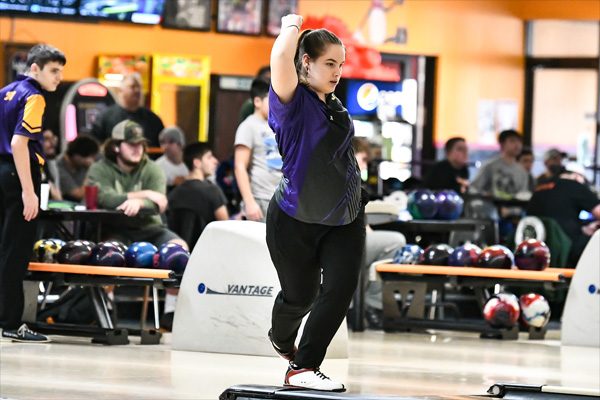 Onsted High School bowler Sydney Nichols, pictured above, follows through with a shot during a match last week at Ten Pin Alley near Tecumseh. She improves in bowling thanks to coaching and a mental approach.

Onsted High School bowler Sydney Nichols is a big believer in getting coaching from different areas.

And the results can’t be argued.

Nichols has improved from a 188-per-game average last year to 211 this season.

The OHS sophomore recently repeated as champion of the Lenawee County Girls Scratch Tournament at Lenawee Recreation Lanes. Nichols rolled a 757 series during qualifying and won all three stepladder rounds.

“I spend a lot of time bowling during the summer,” Nichols said. “These coaches help you work on specifics in your game.”

Nichols says bowling is a lot more mental than most people realize. She experienced that during the Lenawee County Tournament.

“You can be throwing the best shot ever, but you need to have the mental side working,” Nichols said. “I was super nervous during the (Lenawee County) final, but I was able to pull it out.”

It was the second consecutive year Nichols has won the tournament. She has been bowling since age six and enjoys the atmosphere at the bowling alley.

“You make a lot of friends at the bowling alley,” Nichols said. “It is a different atmosphere.”

She qualified for the state tournament as an individual last year but fell 23 pins short of the top 16.

“I was second at the regional tournament, but fell 23 pins short of the stepladder,” Nichols said. “My goal this year is to get into the top 16.”

Nichols has been all in at the bowling alley the past few years. She used to play volleyball and softball but is now committed to the sport. That has allowed her additional time to “study” bowling. (more below)

“At the Lenawee Tournament they had the phantom oil pattern,” Nichols said. “Other bowlers had bowled on it before, so I had to research the pattern.”

Nichols looked up she shot and stayed to the right to make the adjustment for the pattern.

Nichols, who is coached by Jen Marlatt during the high school season at OHS, says becoming a solid all-around bowler – mentally and physically – is important.

“I would suggest someone get help with a bronze, silver, or gold certified instructor,” Nichols said.

So far, it is paying off for the OHS bowler.