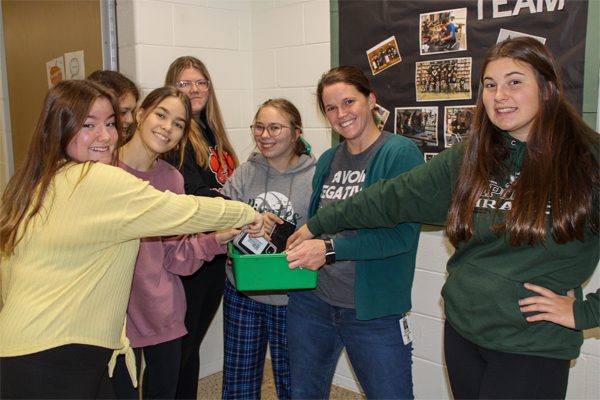 Above: A group of Napoleon High School students hand over their cellphones to teacher Sallie Raftery for the day, for No Phone November.

Technology has changed social life’s fundamental parameters – for the worse if you observe how social media transforms productive conversation to public performance). So, Napoleon High School’s Leadership class is running a ‘No Phone November’ campaign in hopes that other students will join in as they practice less connectivity and more mindful time participating in their daily lives.

A person’s self-image flounders as they envy the false perfection portrayed by someone else’s filtered “highlight reel” of their life. A person’s grip on reality blurs as post likes, and the number of followers suddenly equates to their level of success and self-worth. Makeup companies target women to convince them they’re ugly, sugar companies persuade people they’re hungry, and political groups try to convince people who to vote for – and we let them. But some students are acting on their own behalf to make positive changes in terms of connectivity.

Participation is optional, but those who opt-in has the opportunity to win prizes, trips, and other incentives donated from various businesses and school staff. Prizes are raffled off each day, with larger items being raffled off at each week’s end.

Students who choose to participate will turn their phone into their sixth-hour teacher, who will keep it safely secured from 7:30 a.m. until 2:30 p.m. The longer students leave their phones, the more they can win. 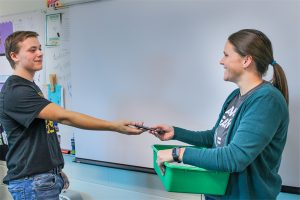 Colby, a Napoleon High School student, hands his cellphone over to teacher Sallie Raftery for the day, for No Phone November.

The idea for the campaign came after some students watched Netflix’s “The Social Dilemma,” which spurred conversations about the amount of time spent on cellphones. Sallie Raftery, Napoleon High School teacher who helped spearhead the campaign, states that the students in her leadership class were intrigued. “I think it was very eye-opening for the students to see the capabilities of phones to send specific ads and to send timely notifications to get you to pick up your phone,” she states.

‘The Social Dilemma’ promulgates the destructive effects of technology – namely, social media. According to research, higher social media use correlates with self-reported mental and physical health and life satisfaction declines. In addition, surveillance-based advertising fuels political division and unrest. At the same time, the algorithms utilized by platforms such as Facebook discriminate by sparking outrage and hate by amplifying biases embedded in their data. 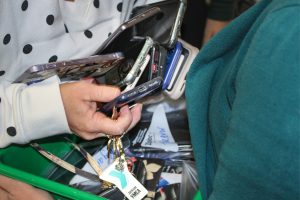 The No Phone November campaign promotes a reduction in cellphone use as students learn the negative side of constant screen time.

Technology, while it has proven incredibly useful, is believed to have taken control over our brains. Instead of merely using technology, mindfulness goes out the window, and technology uses us. “We can’t just allow technology to happen in our lives,” says Justin Rosenstein, former engineer of Facebook. “We need to make conscious decisions about what role we want technology to play.” Rosenstein posits that, while social media appears to be free, we pay for them with our attention.

Raftery agrees. “Every day, we have had more and more students participate. I have had multiple students tell me that they feel better not having [their phone].

Students are doing great things after seeing their screen time and participating in class conversations about being on social media while at school. One student, who hasn’t checked out a library book in three years, is reading a book and says, “it’s been amazing.” Another student says the first day was hard but feels that their stress level and anxiety have decreased.

Several students speak out about their experience so far:

“[Being off my phone] has helped me to focus more on my classes.”

“The No Phone November has helped me focus on my homework and allows me to talk to people I haven’t talked to all year. [Now,] when I do have my phone, I don’t really want to be on it. I think it was a great idea.”

“It was hard at first, but it’s been nice. It relieves stress.”

“I truly believe that not having their phone all day is going to improve their mental health and grades,” says Raftery. She hopes students will continue to be off their phones during the school day post-November once they experience the benefits.

If you are willing to donate prizes, contact Sallie Raftery at (517) 905-5823, sallie.raftery@napoleonschools.org, or drop items off at the high school’s front office.