There is hope in the fight against opioids 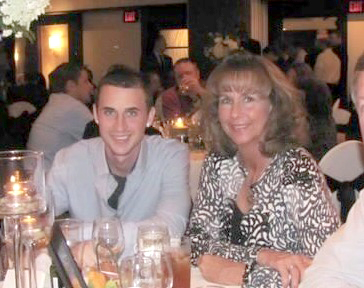 Above: Chris Risner with his mom, Julie Risner.

The legacy of Chris Risner will live on

Chris Risner was a family-oriented young man who passed away much too soon at the age of 29 on Nov. 21, 2018. He struggled with an addiction to opioids, but used that battle to have an impact on, and likely save the lives of many with whom he shared his struggle.

In his family life, Risner was especially close with his two nieces, Ellie, 11, and Adley, who just turned 2.

“A lot of times they were the reason he got out of bed in the morning,” said Risner’s sister, Angela Mentink. “He loved those girls, loved spending time with them,” adding that on Halloween he took them out trick-or-treating.

“We’re a very close family and had a lot of really good times together. He worked hard to keep people laughing,” she continued. 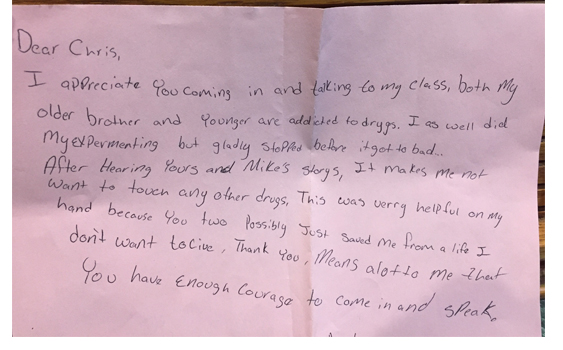 This letter from a student says it all – Chris’s talk at this school may have saved a life.

He went on to work with his dad, Dan Risner, producing training media for online training programs. He shot and edited video, and even took on the role of actor for some of them.

“He had a great rapport with all of the clients,” said Julie Risner, Chris’s mom.

Yet, his best work came in his own fight against the opioid epidemic. He worked with the group Andy’s Angels, founded by Jackson area businessman Mike Hirst, who lost his son Andy to a heroin overdose in 2010. Andy’s Angels is a non-profit foundation that educates people on opiate abuse and provides support for families and those suffering from addictions. The foundation raises funds to assist with the costs for treatment programs. 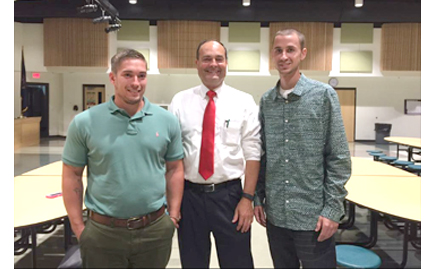 “He said that he wished somebody like him would have come to his high school and told him the things that he was telling kids,” said Mentink. “If somebody had told him that Vicodin can lead to heroin addiction, he may have led a very different life.”

The issue was important to Risner, as he spoke with Hirst and other opioid panelists at many area high schools.

“It was important for him to get out and work with different community leaders and with Andy’s Angels to try to prevent teens from following in his footsteps,” Mentink said.

“He was adamant about trying to get through to kids,” Hirst said. “Here’s a guy that could hardly keep himself alive, but he was willing to get up and go out and make sure nobody else went down the path he went on. That says a lot about a person right there.

“He had a great grip on what causes addiction and what really happens, and that was the message he always gave to the kids. He didn’t pull any punches when he was talking to them – he gave them the real story – exactly what happens to you, and that’s what they need. You need to hear all the facts, all the gory details. He would give it to them and they would listen.”

Hirst said opioid addiction can happen to anybody. He knows 4.0 students, athletes, cheerleaders, pastors of churches, seminarians, and other “normal” people that have become opioid and heroin addicts.

“I loved him like my own son,” Hirst continued. “We went from being close friends to pretty much family,” adding that Risner told him he had the greatest parents in the world.

“Everybody thinks these are a bunch of bad kids from the wrong side of town with a crummy set of parents, and that’s not the case at all.”

“And here sat our son,” Julie said. “He was very, very well versed about addiction, recovery, and knowing pretty much every drug out there. He often would correct something if they were mis-speaking about it.”

Chris was supposed to have spoken to students at Hanover-Horton High School and Hanover-Horton Middle School on Dec. 5 with Mike Hirst. Due to his passing, Mentink went in his place.

“I was able to reach those kids on his behalf,” she said. Her speech to the group is now posted on Facebook and has had over 110,000 views from people around the state and country. It includes a video of Chris telling his story.

“Through that, we really feel that Chris has been able to continue with the work that he was doing prior to his passing, and he’s continuing to reach kids and hopefully prevent future addiction issues,” Mentink added. “Everyone should be watching this video, and with their kids. If it can happen to our family, it can happen to anyone.”

“It was so impactful the way it was put together,” Julie added. “It has really made a huge impact. Angie is trying to carry the torch for her brother now.” She added that more and more schools continue to reach out to Angela to speak.

“Prevention is key,” she said. 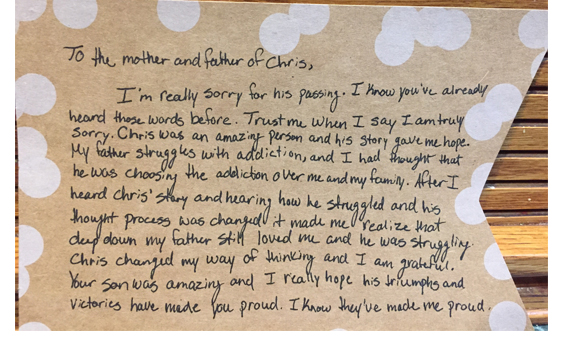 This letter from a student to Chris’s parents sums up the impact Chris had on the lives of those whom heard him speak.

Chris had worked with Jackson County prosecutor Jerry Jarzynka on the Jackson County Task Force on Heroin and Opioid Abuse. The task force has held five drug summits at Jackson College since 2014. Risner was a panelist on some of them. He was honored at the fifth summit on Nov. 30, nine days after his passing.

At the summit, a video was shown from the floor of the U.S. House of Representatives where Congressman Tim Walberg paid tribute to Risner, who worked with him on the Bipartisan Task Force to Combat the Heroin Epidemic.

In an official statement for the Congressional Record, Congressman Walberg said, “He bravely and openly shared his personal struggles to educate young people and their families about drug addiction. By doing so, he touched many lives and inspired them to follow the right path…That’s why, earlier this year (in 2018), we enacted a bipartisan law to combat the opioid crisis in a comprehensive way. Yet in memory of [Chris], and so many others, we still have more work to do. May all of us commit to redoubling our efforts in the year ahead.”

“He was a warrior and did an outstanding job in the fight against the opioid epidemic,” Jarzynka said. “He touched a lot of lives and I believe he saved a lot of lives by telling students his story – how his path to opioid addiction started with taking one Vicodin. He was an excellent speaker and really connected with people, especially students in schools. I really appreciate all the work that he did for our community.”

“We intend on continuing those efforts in his name in the fight against the opioid epidemic,” said Mentink.

The Risners, together with Mike Hirst and another parent who lost a son to addiction, formed a support group called Families for HOPE around four years ago. The HOPE acronym stands for Heroin Opioid Prevention Effort. The group is for those with loved ones struggling with addiction and people who have lost a loved one to addiction.

“Chris would speak to our group to help parents understand what their loved ones were going through,” Julie said. “They really appreciated his perspective.”

“Chris would tell them the real story and it was so beneficial to the parents to help them understand really what was going on,” Hirst said. “He was trying to make amends and the only way he could make amends was to prevent somebody else from getting into this mess. That was his mission and purpose in life.”

Julie Risner would like more people to know that Families for HOPE is out there. She said there are currently around 70 people that participate with the group at one time or another. The group has monthly meetings with guest speakers and open discussion. Those interested in more information can contact Julie Risner at 517-745-0199 or can find Families for HOPE on Facebook.

“We have a lot of resources if people want to come and participate and share what they’re going through,” Julie says. “Even through our grief, we want to continue on in Chris’s legacy to help people.”