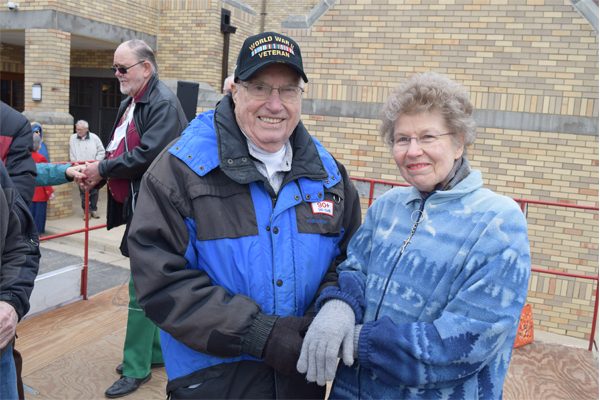 Story and photos
By John Hummer

Not many people make it to their 100th birthday. But thanks to his square dancing and remaining active throughout his life, World War II veteran Herb Elfring, of Jackson, was joyfully celebrating his 100th birthday with a crowd exceeding 100 people of family and friends last Saturday at Jackson First United Methodist Church.

Herb spent five years with the U.S. Army National Guard in the South Pacific out of San Diego, Calif. in World War II. “The day the Japanese hit Pearl Harbor they hit every military installation on the island,” he recollected. “I was probably missed by stray bullets two times that morning.” He considers himself quite lucky to be a Pearl Harbor survivor.

Herb’s actual birthday was Tuesday, March 29. He said being active is the key to his longevity. “I played golf occasionally, tennis a couple of times a week, and square danced maybe two, three, or four times a week. I think square dancing is probably as good of a longevity activity as any that anybody could possibly be involved in,” he said. 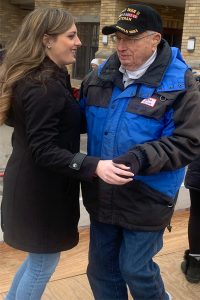 Herb had fun square dancing for quite a while at his 100th birthday celebration. Here he dances with Ashley Treier, the daughter of one of his friends.

The day started with Elfring arriving in a “Herbie the Love Bug” Volkswagen Bug provided by Don Marshall of Marshall Motors. Then came a drive-by parade where fire, police, and military vehicles drove by the church waving and honking their horns. The Vietnam Veterans of America Chapter 109 started the parade. American Legion Post 29 of Jackson helped fund the festivities.

The parade also included some classic cars and motorcycles. “Herb got a thrill out of that,” said veterans’ advocate and event coordinator Annie Callahan.

One of the fun activities at the party was square dancing led by Single Squares of Jackson. Herb spent quite a while on the outdoor dance floor. 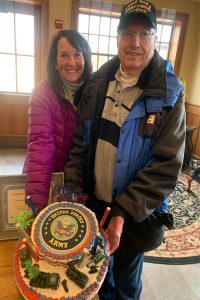 Veteran advocate and party coordinator Annie Callahan and Herb display a cake made for his 100th birthday party. The cake was made and donated by Randy Treacher of ABC Bakery in Jackson.

Malted milkshakes, invented by Walgreens in 1922, were also available from Walgreens for Herb and party-goers to enjoy.

“We wanted this event to be reflective of Herb’s day-to-day,” Callahan said. “There are so many cool facets about Herb, and we wanted to bridge all the worlds.”

Because of his dedication to square dancing throughout his life, Elfring was presented with a Certificate of Recognition and Appreciation from the United Square Dancers of America.

Elfring was also an avid downhill skier throughout his life and only hung up his skis at the age of 97 after being a member of a 90-plus ski club. He was known for doing “whirly-birds” at the end of a downhill ski run.

“It was overwhelming,” Herb said of his 100th birthday celebration. 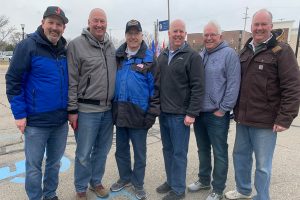 Herb (third from left) with his son, Rich, second from left, and his son’s best friends.