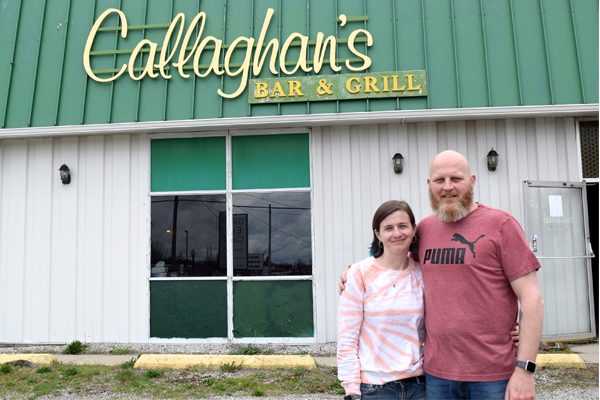 Above: Chad and Desiree Fires are continuing to clean up Callaghan’s. Their dream is to turn the building into a coffee shop.

If coffee in the morning is like music to your ears, one local couple is working hard to make sure your future is filled with Mozart and caffeine, all rolled into a great experience featuring their favorite blend of Joe.

Chad and Desiree Fires of Brooklyn have been diligently working to turn an old building into an asset for the community that features great coffee, rolls, and eventually sandwiches and more. But getting there hasn’t been easy. The old adage to “Wake up and smell the coffee” implies that one should perhaps give up on a dream in order to face reality. For the Fires, it merely means that they have to work harder and adjust as life unfolds, particularly when opening their fledgling business.

The Fires purchased Callaghan’s, formerly known as Diz’s Harvey House, last year with plans of turning the old bar into a coffee house. They faced a lot of work. The building had sat empty for a long time, and was poorly maintained before that. Their plan to refurbish the building hit snags from the outset, and came to a standstill altogether when Governor Whitmer ordered businesses to shut down.

“It became a lot bigger project than we planned,” said Desiree. Chad agrees. “Everytime you opened something up, you found something else that needed to be fixed,” he said. Fortunately, the structure is solid. “It definitely has good bones,” said Desiree. “The good news is that once we are done, everything else is going to be brand new.” 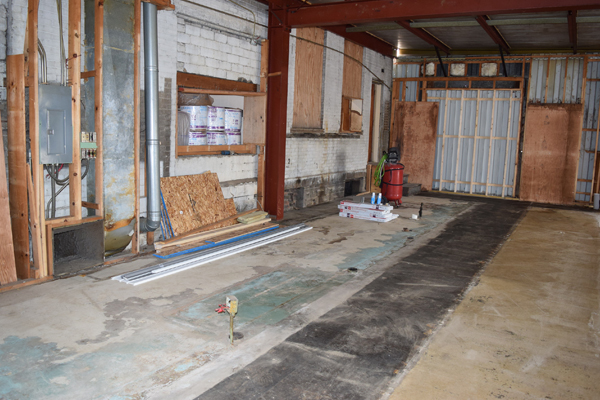 Above: you can see where the bar once was located.

The couple has worked hard to get the building where it is, which can best be described as stripped. The walls have been taken down to the studs. Both downstairs bathrooms have been removed and the floors scoured. The only trace of the long bar that once ran nearly the length of the building is faded flooring, like a shadow of where so many thirsty patrons once bellied up for a brew.

The Fires have also removed portions of the building on the east side of the structure, where they will have a drive-through for customers to pick up a coffee and donut on their way to work.

They were in the middle of rebuilding when the governor ordered the shut-down. Originally hoping to have the coffee house up and running by May, the date has been pushed out to early July.

It will be important to hit, or get close, to that date. Chad is recently retired after serving 25 years in the United States Air Force. Desiree, a 2000 graduate of Columbia Central High School, is a schoolteacher in the Northwest School District. They plan on having a manager run the new business as they continue their careers (Chad now works for the Department of Defense in Grand Rapids, often remotely). Having someone in place by the time school starts next fall is important, said Desiree. 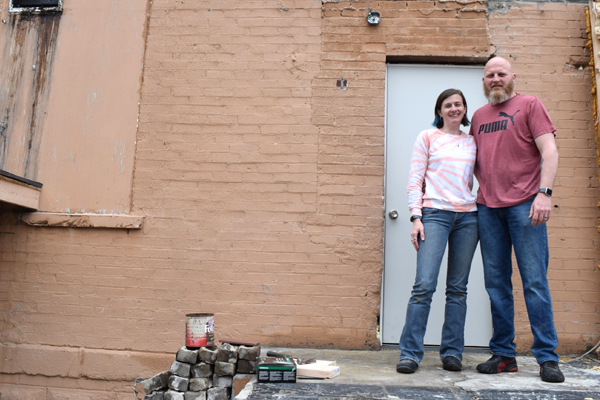 Fortunately for the Fires, people really, really (really!) like their coffee. They researched their project carefully, and are confident that once built, people will come.

“Our target is to be serving coffee by July 4th. Right now, that would be mostly by drive-through, unless we can get the interior done in time,” said Chad.

Customers will be able to access the drive-through window by pulling in from M-50. They will get their coffee at a new window on the east side of the building and exit on Monroe Street.

While the goal now is to get the drive-through open, eventually they will have dining and café space inside. The upstairs room will be used as a conference room, while the downstairs will be redone into a cozy atmosphere that customers can utilize to get online or visit while lunching.

Chad said that the state shut-down was making it tough, but there is light at the end of the tunnel. “We didn’t anticipate having up to two additional months of putting money into the building without getting anything out, but we will be OK. We really think this is what this town needs.” He noted that more people are working from home, and they will be able to come in, get a bite to eat and still get some work done.

Desiree agrees that the need in Brooklyn is great for a place people can get online, have coffee, or even read a book.

“It will be place where people can hang out and catch up with their friends and family,” she said.

“We really hope for it to be a gathering place for people of all ages.” 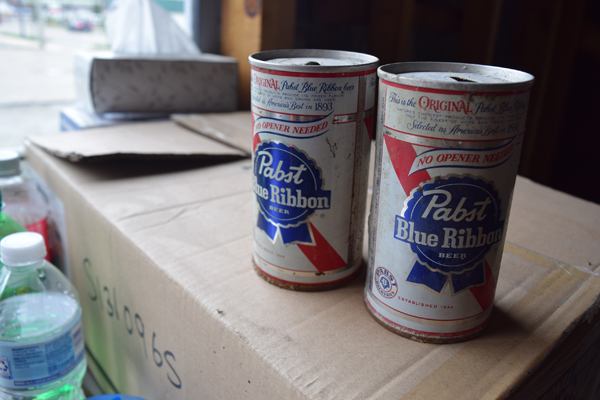 These old beer cans were found inside a wall that was being removed. Note the pull tab tops.