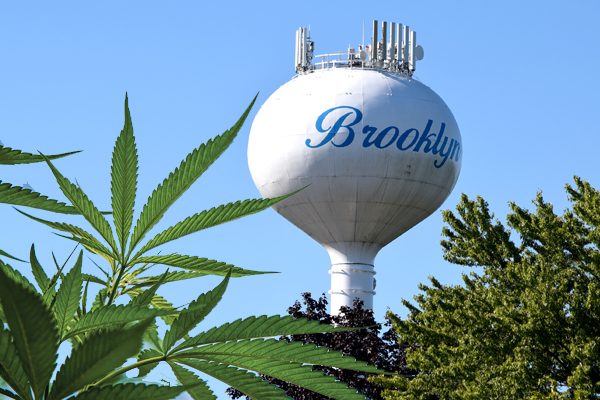 The way is cleared for two marihuana licenses in the Village of Brooklyn – one for medical marihuana and one for recreational marihuana, as the Brooklyn Village Council passed a proposed marihuana operations ordinance at its meeting Monday night by a vote of 6-1. The lone “no” vote was cast by council member Phil Bliven. The two licenses may be issued to the same licensee for use at the same location.

The ordinance limits activities to two permits pertaining to the retail sale of marihuana products, one each for medical and recreational marihuana, to locations that are zoned General Commercial which have been designated a Commercial Redevelopment District and a Brownfield Redevelopment Project.

“The research I did ties this to economic redevelopment – that’s what I think is a critical thing for the village – as opposed to opening it up to any commercial property in the village,” said Village Manager Jae Guetschow. “The village is well within its rights to do that – you can identify what districts you want. Even if you wanted to make it available to a broader area in the village, it’s the village council’s decision how many permits or licenses to issue. In this case, the recommendation is for two.”

During discussion on the matter, village council member Phil Bliven asked, “That would prohibit any other place from being open – why? To which Village President Estella Roberts responded, “You have to start somewhere, as Jae said. At any point in time, we can come back to the council and if we got a legitimate proposal from another business, we certainly have the opportunity to review that and make a decision.”

“It would be like saying one hair salon,” Bliven replied. “We’ll let you know and get back to you if you can have another one.”

“I like to think of it as being one bar,” Roberts said. “And we only have a certain amount of licenses in the county for bars or businesses that sell those kinds of things.”

Though Bliven was the only council member to cast a “no” vote on the ordinance, during public comment, Chad Fires, co-owner of Callaghan’s Coffee Café in Brooklyn, voiced his opposition as well.

“I’m all for doing something with the mill (the old Ford plant); I’m all for putting a marihuana dispensary in there – but I think the way the village is going about doing it is not ethical or moral,” he said. The ordinance is being amended in a way to allow one property in this village that meets all those requirements to get that. And they’re also allowing one recreational and one medical license – which are going to go to that one property. That’s not very fair trade. If you want to open it up, open it up. If you’re not going to open it up to everybody, don’t open it up.”(More below)

The ordinance requires that license application fees of up to $5,000 per year per license be paid by applicants. The village would also receive a portion of the sales tax revenue mandated by the State of Michigan.

The Village of Brooklyn Planning Commission conducted a public hearing on the Marihuana Operations Zoning Ordinance on Sept. 1, 2021, where the commission voted 4-3 to recommend approval of the ordinance to the village council.

“It’s very specific to properties for economic redevelopment,” Guetschow said. “We have one commercial redevelopment district at this point. It’s also tied to brownfield redevelopment. What this would do is provide for economic benefit as well as environmental benefit to the entire village.”

Without mentioning a specific business, Guetschow was referring to the old Ford plant on Mill Street in which building owner Dan Ross and entrepreneur Pat Collins are planning to open a dispensary for marihuana related products at one end of the building. Collins was in attendance at the village council meeting but did not speak during public comment.

The overall purpose of the ordinance is to regulate the establishment of marijuana operations and to provide penalties for violations of it. Section 1, Article III of the ordinance creates a Marihuana Operations Overlay District as a special zoning district to permit the establishment of certain marihuana operations in the village. The ordinance requires the rezoning of eligible properties as a Marihuana Operations Overlay District. Section 2, Article IV sets forth development standards for marihuana operations. There are 10 other sections to the 12-page ordinance.

The same section of the ordinance that stipulates the number of permitted licenses (Sec. 62-539) also indicates that the village “shall not issue additional marihuana operations licenses without further amendment of the Zoning Ordinance.” This means the village must go through the same rigorous ordinance amendment process to get more licenses approved.

An amendment to Chapter 38 of Brooklyn’s Municipal Code, titled “Offenses”, was also unanimously approved by the village council, 7-0. The chapter had previously prohibited all activities pertaining to marihuana and needed to be amended to permit the transport and retail sales of marihuana products. A new ordinance contained the amendment to delineate permitted activities pertaining to both medical and recreational marihuana.