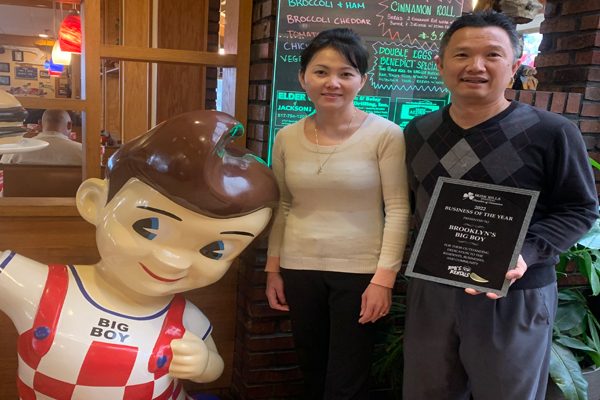 Dong and Ly Huynh, owners of Brooklyn Big Boy, proudly display their Business of the Year Award from the Irish Hills Regional Chamber of Commerce.

Brooklyn Big Boy, a long-time gathering place for a delicious, reasonably-priced meal and their famous pies, was honored with the 2022 Business of the Year award Thursday, April 28, Irish Hills Regional Chamber of Commerce Community Awards. The business is owned by Dong and Ly Huynh. 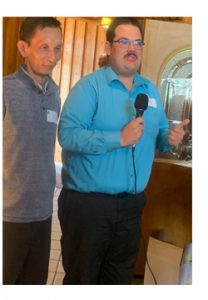 It is not quite their style to be in the spotlight, so they sent General Manager Ku Phan and Restaurant Manager David Spencer pictured left, to accept the award. Dong sent a very brief acceptance speech.

“Ly and I would like to thank you for your kindness, and we appreciate all the Chamber does for the community. I prefer to stay low key and I’m not good at awards stuff. I am sending my general manager to accept this award on our behalf. I just like to play the support role. Thank you to all for this honorable award.”

Spencer then added some words of gratitude. “On behalf of Big Boy in Brooklyn, we thank you so much. It’s been a struggle for two years. Everything has been a challenge – going from carry-out only back to full service. You guys have been wonderful.”

Dan Ross, who presented the award, did a little bit of research on the Huynhs. Dong started working at Big Boy in Jackson in the late 1980s while still in high school. He and Ly took over Brooklyn Big Boy in 2007. Their signature event, Wednesday evening car shows throughout the summer, was there long before they took over, so they just keep it going and it has become bigger and better under their ownership.

When they are not working, they spend time with their family at home and have family dinner every Sunday. They enjoy taking their kids to the lake during the summer. They plan to stay in the community and be involved for the foreseeable future.

So, the next time you have a hankering for a great burger and awesome service, head on over to Big Boy in Brooklyn and let them know they are appreciated. Congratulations to this year’s Business of the Year, Brooklyn Big Boy, owned by Dong and Ly Huynh. (more below)

A little history on Big Boy, courtesy of Dan Ross

Big Boy was founded in 1936 by Bob Wian in Glendale, Calif. who named the first restaurant Bob’s Pantry.

The red and white plaid overall-wearing mascot we all know and love is named Bob, after the founder. But it was modeled based on the look of Richard Woodruff, one of Bob’s original employees, a chubby kid with his hair parted on the side.

Richard didn’t make a salary and washed dishes for free Burgers . . . which may explain his weight. Bob referred to him as Big Boy and eventually named his famous double cheeseburger and restaurant after him. Richard grew to be a six-feet, six-inch, 300-pound man.

Big Boy’s claim to fame is being the first in the industry to offer a double patty burger, the original Big Boy burger.