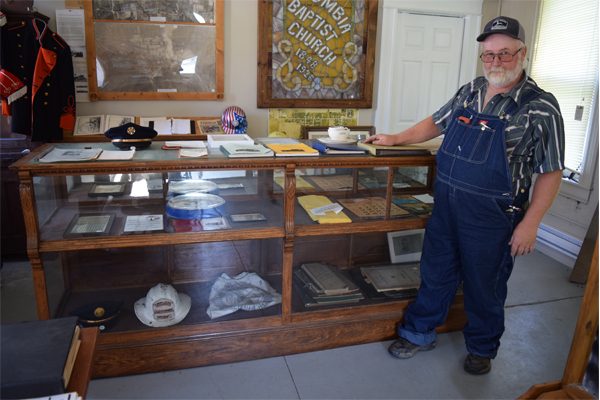 Cement City in its heyday was an industrial town and its history is being documented in its Historical Museum. Tim Wheaton, Cement City Department of Public Works administrator, also serves as the curator and caretaker of the Cement City Museum. Here he displays the showcase in the museum with many Cement City artifacts housed in it. 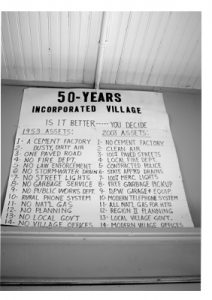 At its village council meeting that month, the council adopted a resolution to accept donated items to the museum with a mutual agreement to return those items to their rightful owner when and/or if the museum ceases to exist, or if the donor would like their item back for any reason.

There were big changes in the Village of Cement City from its incorporation in 1953 to the village’s 50th anniversary in 2003. Most of the “2003 Assets” remain the same today. So, is Cement City better today, than it was in 1953? You decide (comparison in the photo on the left).

Tim Wheaton, Department of Public Works administrator for the Village of Cement City, has taken on the role of curator and caretaker of the museum. The building the Cement City Museum is housed in previously served as a village voting precinct, Wheaton said. “I had heard from one of the local residents that in the 40s it was a library,” he noted. (More below) 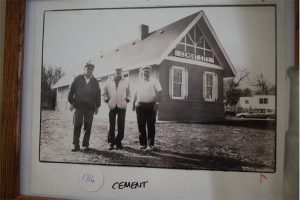 What is now the Cement City Village Hall once served as the second depot for the Cincinnati Northern railroad. “It was built in 1925 and was said to be state of the art and the envy of all small towns,” said Cement City DPW Administrator Tim Wheaton. “Eventually the Village of Cement City bought the building and it’s our offices and meeting hall now.” Pictured are the three founding fathers of the village: Archie Crawford, Beryl Williams, and Eugene Harbaugh.

The museum is currently open just one day a year – on Memorial Day – when the Village of Cement City hosts its Memorial Day parade. However, to visit the museum throughout the rest of the year, an individual simply needs to call Wheaton (see the end of the story for his phone number) to arrange an appointment to meet him there. “They can spend as much time as they want here,” he said. (More below) 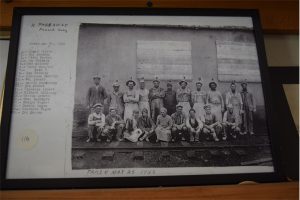 This is a photo of Cement City cement plant workers taken on May 25, 1928.

One of the prized possessions of the museum, according to Wheaton, is a binder full of photos of each class of the Cement City Agricultural School from 1933 until its last graduating class in 1967. Wheaton said the binder was compiled by village resident Sandy Marsh. “She put a lot of work and research into that book,” Wheaton said.

Below: When the Cement City Museum curator and caretaker Tim Wheaton opened up the village museum for us last week, to do this piece, a bit of an oddity happened. One of the artifacts inside the museum is this muskrat trap which has the name of Jesse Shaffer of Cement City on it. It was found by an anonymous person who was doing some metal detecting in Mackinac County in the Upper Peninsula. It just so happens that Shaffer’s nephew, Jim Shafer (yes, he spells his name with one “f” compared to his Uncle Jesse’s last name), stopped by the museum last week since he saw some activity inside. Little did he know that his uncle’s muskrat trap was found by someone in the U.P. and is now part of the Cement City Museum collection! 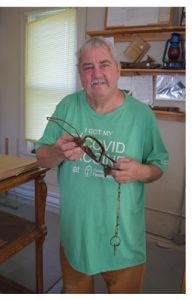 By the virtue of the village’s name, the Cement City Museum holds many photos from the village’s heyday as a cement industrial town. It also features several photos of the Cincinnati Northern train depot and railroad which ran through the village for many years serving the cement plant. One can also view many photos of Main Street in Cement City from the horse and buggy days on through the early days of the automobile. There are also many newspaper clippings from the Brooklyn Exponent throughout the years that feature different parts of Cement City’s history. 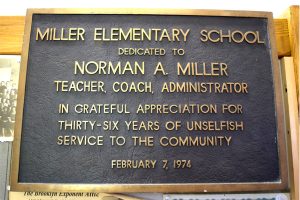 appreciation for Norman Miller for whom the school was renamed.

Wheaton is happy to show visitors all the history and lore the museum has to offer as he hails from the area himself. He was born and raised on a centennial farm between Brooklyn and Cement City and attended Miller Elementary School. He then finished his high school years at Columbia Central High School when Cement City schools merged with Columbia School District. Following high school, Wheaton has been a contractor in the Brooklyn area since 1985. In 2012, he started working for the village. He retired from his contractor work around four years ago and now solely works for the village and takes care of the museum. 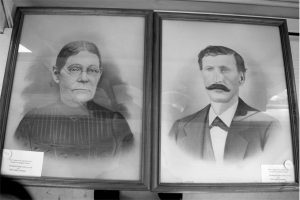 Judah Swartaut and Elisha Lewis (1835-1883) were the first couple married in the Cement City Baptist Church in the 1850s. 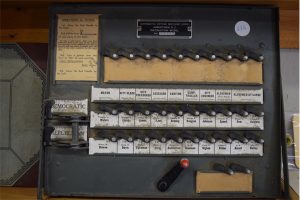 This voting machine, from the Automatic Voting Machine Corp., makes one wonder if it was any more secure

than today’s voting tabulators which have raised many questions in recent years. Maybe simpler is better?

Note there were no other parties than Democrat and Republican. 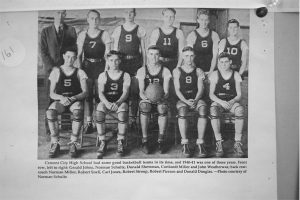 Back in the days of the village’s glory, there was a Cement City Agricultural High School.

This shot shows the players from one of its better teams in the early 1940s.