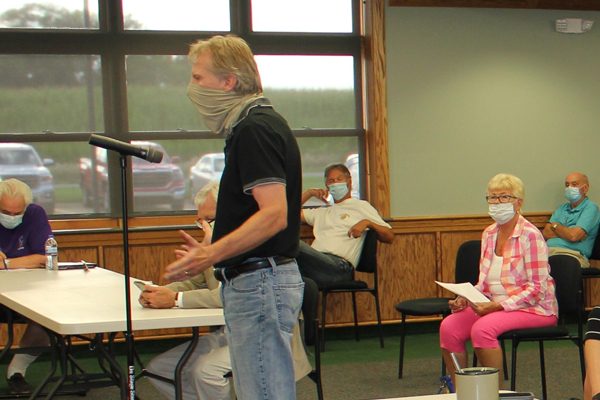 Above, Jeff Hubbard, resident, expresses concern about the increasing speed zone in the location of the proposed commercial site.

Cambridge Township Planning Commission members joined a regular meeting with a public hearing on July 29 to hear concerns regarding rezoning property from Ag-1 to General Commercial-2 at the request of J & W Warner Farms.

Due to COVID-19 restrictions, attendance at the meeting was limited to 28 persons appropriately spaced. All chairs were filled and 17 others took advantage of joining via the Zoom meeting video and calling options per deputy clerk, Annette Roesch. Chairman Rick Streams outlined the meeting procedure and clarified the focus issue was whether the land should be rezoned, and not whether any particular business should be allowed. “We don’t know that it is a Dollar General. We haven’t been told by the owner,” Streams added, calling out the elephant in the room.

Resident, business owner, and longtime opponent of Dollar General, Marty Hubbard later confided at this point she felt “the wind almost come out of the sails in the room.” She would later clarify to the trustees that “John Warner told me he has an agreement with Dollar General.”

Sarah Sollers, representative of Onsted Chamber of Commerce asked for clarification on the purpose for the hearing based on the chairman’s focus. Streams clarified, “We recommend to Region 2. It is just the first step in the process.”

Onsted highway resident Andrea Reichel summarized two prominent concerns many voiced through the evening. “My main concern is for the safety of the children crossing from the school,” she began. The proposed rezoning would place a commercial storefront near the school entrance and in an increasing speed zone. Secondly, she expressed concern for “the impact on the downtown businesses, and specifically the local grocery store, Borchardts.” 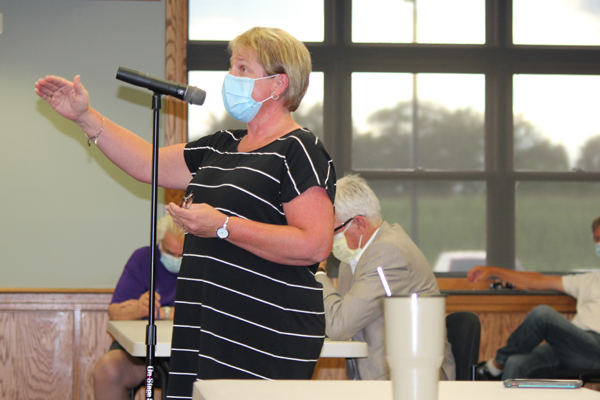 Several attendants vocalized concern about Warner Farms’ prior commitment of the land to the Department of Agriculture under PA-116. The Michigan Farmland and Open Space Preservation Act, passed in 1974, requires farm owners to commit to an agriculture use contract for 10 to 90 years in return for tax benefits.

If breaking the terms of the agreement, the farmer must pay back the prior seven years of tax credits, except in special circumstances such as a family member wishing to build a house on the land or the land to be used for something to benefit the public. Resident Brian Giroux suggested further exploration into this agreement. “I would like to know the stipulations in regards to this property – which actually would apply?” Other members of the public argued that a commercial store, such as potentially Dollar General, would not meet the exemption clause for withdrawal based on the store’s reputation and multitude of sites.

Zoom caller, Kathy Zmijewski from Howard Hannah, emphasized this point. “There are 13 Dollar Generals in a 10 mile radius of the village already. We don’t have a lot of land, and no one’s making it anymore. Someone needs to do a study to determine what is the highest and best use of that property. The issue is what is best for our community.”

Under C-2 zoning, a variety of businesses could be built. These include schools, indoor retail, amusement and recreation facilities, lounges, eating and drinking establishments but not drive-ins, funeral homes, churches, and other conditional uses. Kim Uhbi, owner of JJ Convenience store and gas station, suggested that until all commercial property downtown has been utilized, additional should not be rezoned at this time.

After commentary was given from on-site and Zoom participants, trustee David Horner read the eight letters that had been submitted summarizing, “they all say about the same thing.” Resident Craig McMichael teased out the misunderstanding about the activists against Dollar General. “We are not against a commercial use for the space or for progress of new businesses in Onsted. But, a Dollar General would say, ‘we give up trying to develop our own unique identity.’ Dollar Generals don’t offer anything that we can’t get down the road and they won’t give back to our community like local business owners do.” 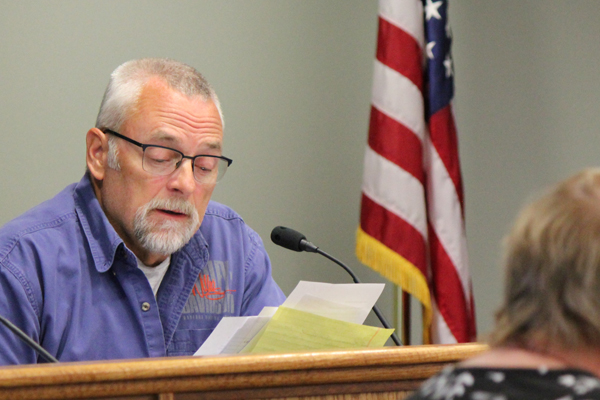 Trustee David Horner reads the letters submitted to the commission all in agreement to deny the request to rezone.

No representative was present from J & W Warner farms, and there was no response when called for comment. No one in the audience or via Zoom expressed support for approving the rezoning request.

Comments by the commission followed, and then a roll call vote revealed a unanimous decision to recommend a denial of the request to rezone.

Jeff Hubbard congratulated the board for its incorporation of the Zoom opportunity during these times and for its care and handling of the meeting.

Marty Hubbard afterwards marveled: “It’s nice to be in a place where the people who govern are responsive to the concerns of the people. They are our neighbors. It makes me even more grateful to live here and be passionate to preserve it.”

In the regular meeting the sole new business item was reviewing the site plan for HoneyTree, Inc. They requested permission to build additional storage. After brief discussion, the plans were approved and the public hearing began.