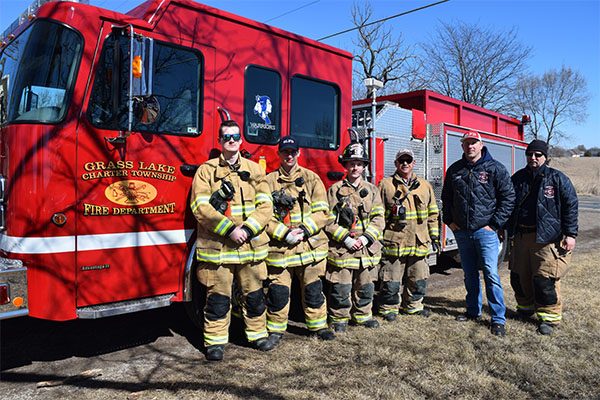 An old farmhouse on Wolf Lake Road between Napoleon and Grass Lake served as a training site for 21 firefighter cadets from throughout Jackson County Saturday. Another 15 to 20 firefighters from various fire departments came out to help with the training.

The house was donated to the Grass Lake Fire Department by Tom Loveland, treasurer of Grass Lake Charter Township, said Grass Lake Fire Chief Greg Jones. Jones then decided it would be a great site for the Jackson County Fire Academy. 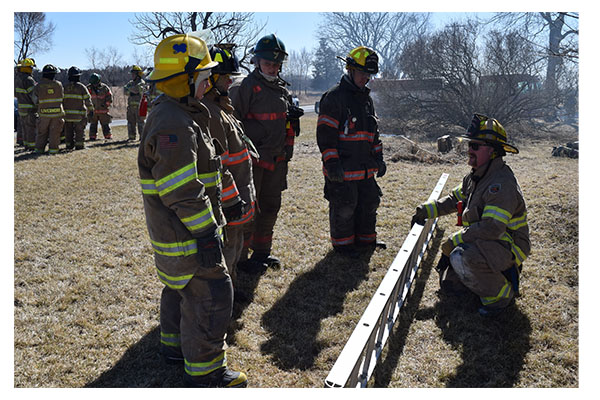 Donovan Green, a firefighter with Summit Township Fire Department and one of the Fire Academy instructors, teaches a group of academy cadets the proper techniques of working with fire ladders.

The cadets were on hand training as they work toward earning their firefighter certificates when they complete Firefighter I and II courses on March 27. The students must pass both a written test and a practical test consisting of many of the techniques they learned at the practice site.

Scott Grajewski, deputy director of the Blackman-Leoni Department of Public Safety, was one of the lead trainers of the academy. He explained that Jackson County’s annual Fire Academy is when cadets from departments throughout the county undergo what’s called “evolution training”.

“Basically, they are trainings they’ve already incurred and dealt with through the fire academy,” said Grajewski. “We’re bringing them out here and showing them in greater depth how they can incorporate them. At the academy, they don’t have a true setting. This gives them an actual residence to give them a more realistic process for it.”

Grajewski said the cadets practiced self-rescue training where they learned how to escape if they were ever trapped inside a building. They also participated in basic ladder training where they checked for overhead obstructions and practiced proper techniques in setting up and positioning a ladder. In addition, they learned how to break out windows and breach walls to get out of a burning house.

Once near the top of the house, cadets were able to cut holes in the roof for additional ventilation (if for a real fire) and used a large fan for horizontal ventilation. “The added ventilation helps get the heat and gases out of the structure and sometimes helps find exactly where the fire is,” said Grajewski.

Another training station was inside the house where a smoke machine was set up in the basement. The cadets had to bring in a hose line and had to be able to find their way out of the building. 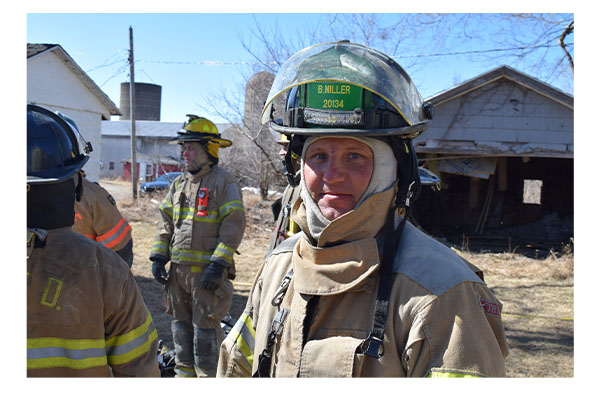 Ben Miller, pictured, is one of the cadets training for the Napoleon Township Fire Department. “This is awesome training – something I believe should be in every academy,” he said. “This is live – something that’s real life for us. We’re taking full advantage of it. Some of this stuff is, unfortunately, like a real-life situation we’ll be in. This training is going to help us survive and get through it.”

Becky Livermore, another Napoleon cadet, was participating in the training. “This is great hands-on training,” she noted. “This is giving us a touch of real-life training inside a structure rather than a classroom. It’s fantastic.”

After a few more training sessions using the house as a learning tool, it will be torn down.