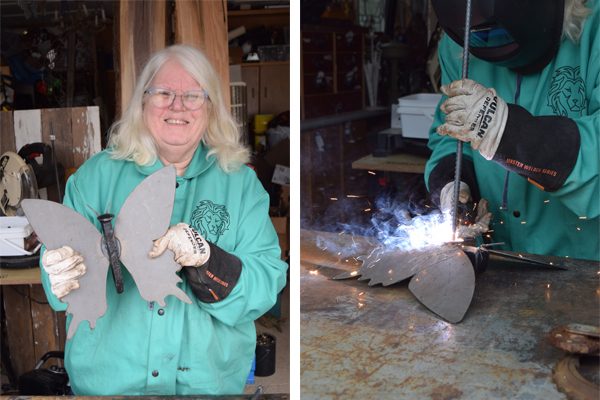 Above: Lake Columbia resident Nancy Backus welds together a butterfly using a railroad spike for the body. Backus who lost three loved ones in a year has always loved art but found it to be therapeutic while going through the grieving process.

Photos and story
By Matt Schepeler

Nancy Backus’ world was turned upside down in 2018.

Nancy and her husband, Rick, were traveling through Ohio on their way home from seeing the total eclipse of the sun in South Carolina when a distracted driver ran a red light and struck their car. “We had a beautiful vacation until on the way home when life kind of changed.”

Rick took the full brunt, of the collision, said Nancy. He died a few months later from the injuries.

“We had been married 46 years. We had been together 50, and truthfully, another 50 wouldn’t have been enough time.

“Rick and I were a great team.”

She describes the days after his death as being “a huge, dark hole.

“I never knew how sad you could be,” she said. “It was really dark. I mean, I have tremendous faith, and I know Rick is fine and one day I will see him again. But at that point, I was so terribly sad.” 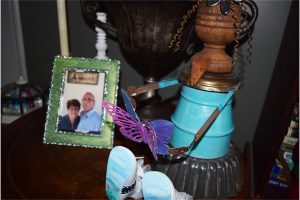 Making matters worse, both her father and mother died in the coming months. Rick died in April, her father in September, and her mother in November.

“It was just an awful, awful year.”

While she describes that time as extremely difficult, she said she knew to keep moving. “Over time, I made a point to always get up every day and get moving. I wanted to honor what Rick and I had built.”

What they had built was a family with three children, and they had filled their world with beautiful art. In fact, Nancy once taught art in the Columbia School District.

Nancy specializes in multi-media. She sees something most people might consider old and perhaps useless and turns it into something beautiful and new.

A walk through her Lake Columbia house is like being on a treasure hunt. Everywhere you look, something unique and interesting pops into view, whether it be a fleet of ships sailing through the air from a bedroom light fixture to an angel standing guard in the corner. 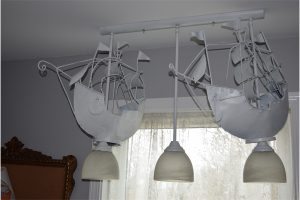 A fleet of ships sailing through the air in Nancy’s home.

It was while making herself “get up and around” that Nancy found something that has helped her in the healing process. “I was flipping through Pinterest one day and I saw this chair they had made into a flamingo. I called my daughter and said “I want to go to the store, and I want to make a flamingo because we had almost the exact same chair. And I knew I was going to be OK from that point on, that art was somehow . . . going to help save me.”

In 2020, Nancy took it a step further. She learned about a welding class that was starting at Drushal Fabricating in Jackson. She and Rick had discussed the idea of her learning to weld before he died, and now she jumped at the opportunity.

“I am so glad I did. They are just wonderful people,” she said of the teacher at Drushal. “He makes it, so you are always successful.

“It really has made a difference. It is therapy for me.” 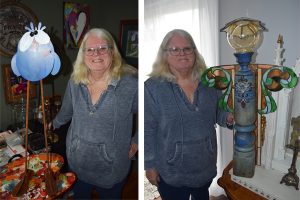 Nancy showcases some of her art in her home.

Traci Breniser (Hawkins) Wilson, a psychologist with Clear Reflections in Brooklyn said that participating in artistic endeavors can be therapeutic for people working through grief.

“It can sometimes be easier to process and express grief through artistic activities rather than through cognitive conversation,” she said. “Art therapy can also help clients unlock repressed emotion as well as provide an avenue to externally express inwardly held feelings.”

Wilson also said that the creative process can also be empowering to those suffering loss.

“Art can also return a sense of control by allowing the client to have control over art mediums, and colors.” 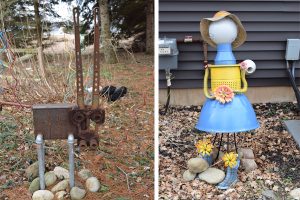 Nancy, who sells much of her art through IDK in Brooklyn, said the sculptures she creates through welding are all about the healing process, and not for commercial purposes.

“Maybe one day I will sell them, but right now, I just need it for me.

“I love it. I have always been involved in some kind of art since I was really little. I think out of the box, and Rick and I were such a good team. I would come up with these fabulous ideas, and Rick would roll his eyes, then think about it and make it better. We did antique booths together, we bought homes and refurbished them.

“God was always so important in our lives, and we were blessed to be such a good team. We had a really good life, and I was totally blessed with the man I got.”

Wilson noted that the grieving process is unique to each individual, and, as long as the beloved person is gone, continues through different phases.

“There is no map for grief. Everybody’s grief is as unique as their own fingerprint. The goal isn’t to make grief smaller, but the goal is to grow around the grief.

“It won’t always be in pain, but you will grieve.” 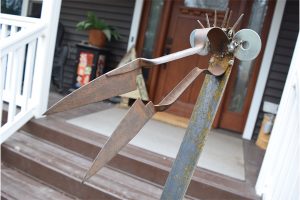