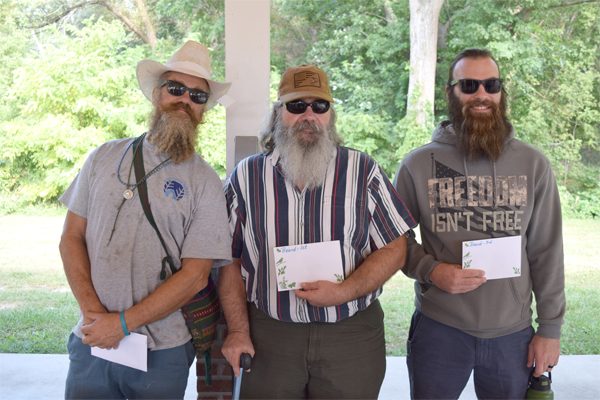 A popular contest at Grass Lake’s Sesquicentennial Fair was the Beard & Mustache Contest. The winner of the Beard Contest was Grass Lake’s own Jerry Havens, center. Second place went to Bill Eberle of Lawton, Mich., left, while Derek Jolly of Grass Lake, right, took home third place honors. Each of them received a cash prize.

Hundreds of people from Grass Lake and surrounding communities came into the village for a dual celebration of Heritage Day and its Sesquicentennial Fair.

There were many smiling faces throughout the day with activities for all ages to enjoy. And even the weather cooperated, as the day featured partly sunny skies and temperatures in the 70s and low 80s with a nice breeze.

The day started out with a remembrance of the national tragedy that took place on Sept. 11, 2001. Following a flag-raising ceremony conducted by Cub Scouts Pack 4326 and VFW Post 10194, there was a moment of silence and prayer led by Pastor Kevin Caldwell of the Grass Lake Baptist Church.

“It’s a somber day in our remembrance of 9/11,” said Village President Joe DeBoe. “We thank and bless all of our military, leaders, and first responders.”

Then the festivities got underway. Heritage Day is an annual special day in which the community celebrates its heritage as a farming community and growing up around the railroad. In addition to Heritage Day, the community tied in its Sesquicentennial Fair to celebrate the 150th birthday of the village this year. (More below) 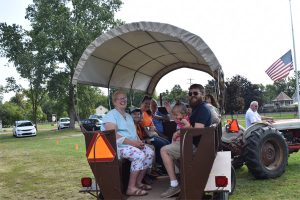 Driver Danny Hart of Grass Lake takes a happy wagonful of people for a ride around town during Heritage Day. The wagon is courtesy of the Whistlestop Park Association.

“I’m recalling 50 years ago when we did the Centennial with all of the activities that happened back then – we had a great time back then,” said Interim Village Manager Jim Stormont. “It looks like everybody is having a great time today. As [village president] Joe DeBoe would say, ‘It’s a great place to call home.’ We continue to work on that to make it even greater.” ( More below) 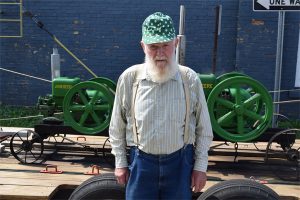 Grass Lake’s Bob Zick displays his collection known as “Mr. Zick’s Marvelous Motors” at Heritage Day. The display includes his vintage 1937 John Deere tractor and two old engines, both built in the mid-1920s. On the display, the engines still work to operate a water pump, also built in the 1920s, and a large fan that was part of a hay drying system some 60 to 70 years ago. The smaller engine ran an orchard sprayer for many years and the bigger engine ran a milking pump, Zick said.

Two blocks of the village were closed to traffic during the day to allow for arts and crafts vendors and other businesses to set up booths for shoppers to browse and purchase a wide variety of items from arts and crafts to clothing, food, and candy. There were raffles, a silent auction, and old-time demonstrations. (More below) 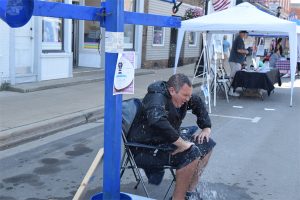 Ryan Felty, a board member of AWARE, gets drenched after a participant threw a beanbag that activated a chain of levers that burst a water balloon all over him. For a dollar a toss, participants were helping Felty collect donations for AWARE, Inc., a nonprofit organization that provides domestic violence and sexual abuse services to the greater Jackson, Michigan community. Suffice to say Felty stayed cool throughout the day!

Star Mead, a former Grass Lake village clerk who is now retired had a booth for her business called Busy Lizzies. “I sold quite a few things so I’m happy,” she said.

Another nice part of Heritage Day is the opportunity for area nonprofit organizations to set up informational booths. Nonprofits featured this year included the Jackson County Genealogical Society, the Sarah Treat Prudden Chapter of the Daughters of the American Revolution, Gift of Life of Michigan, Boy Scouts of America Troop #326, Grass Lake VFW Post 10194 and American Legion Post 252, Grass Lake Senior Center, and the Farmer Commandoes 4-H Club. (More below) 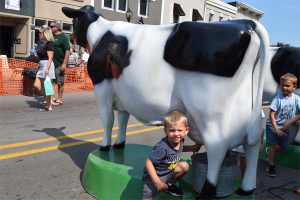 Korbin Reeter, 2 (almost 3!), of Napoleon had fun learning how to milk a cow at Heritage Day. The cow is courtesy of Washtenaw County Farm Bureau.

“I think there is a real feeling that it could be an annual event again,” said village council and fair committee member Jane Fitzgerald, who said the village had annual fairs many years ago. “There is a lot of enthusiasm for it. We can do this again and it can be even better.” (More below) 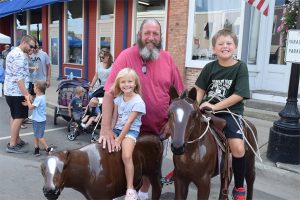 Napoleon’s Paul Henning couldn’t have had a better day than spending it with his two grandchildren – Paisley Navarre, 4, and Noah Navarre, 8 – who were all smiles riding the ponies at Heritage Day.

“We had great participation from children and adults,” said fair committee member Annie Lavergne. “We’ve had a lot of people checking out our displays, and we had sponsors that were just awesome,” adding that there were both business and individual sponsors that supported each fair entry. “Every child and adult entry got a monetary prize plus a ribbon.”

One of the highlights of Heritage Day was the unveiling of the new Jackson District Library Bookmobile. “This is our very first event that we’ve taken the Bookmobile out to, so it is a very, very big deal to us to be here today,” said JDL Bookmobile Operator Anne de Irala. “We’ve been working very hard, and we’ll be hitting the streets and attending community events. It’s going to be amazing. We will be operating all over Jackson County. Our goal is to reach people who are unable to reach us. (More below) 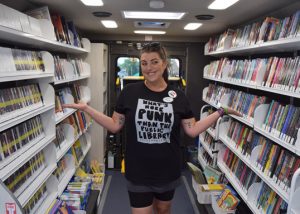 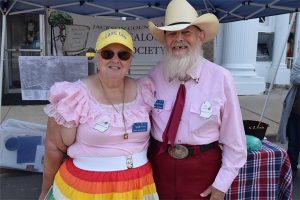 Ella and Neil Welch of Brooklyn are dressed to “cut a rug” during a square-dancing demonstration that took place at Grass Lake’s Sesquicentennial Community Fair, part of Heritage Day 2021. The couple seeks out any square-dancing event they can find in the area, as the hobby is one of the things, they enjoy doing together most. 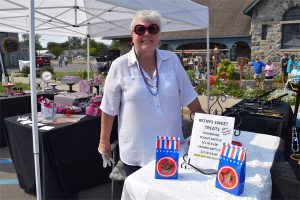 Brooklyn’s Doreen (Reeny) Arrington had a booth at Heritage Day for her mouth-watering “Reeny’s Sweet Treats” consisting of peanut brittle and cashew brittle. 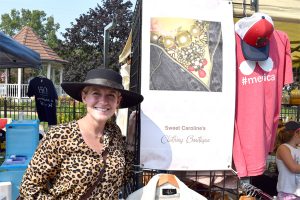 Sweet Caroline’s Clothing Boutique of Brooklyn was one of many businesses that rolled out a booth at Grass Lake’s Heritage Day Saturday. Owner Sara Bieda, dressed in the spirit of the day complete with a stylish vintage hat, displays some of the clothing she had for sale. She said it was quite a profitable day for her booth at Heritage Day