Irish Hills Knights of Columbus teams up to ‘help Gisela’ 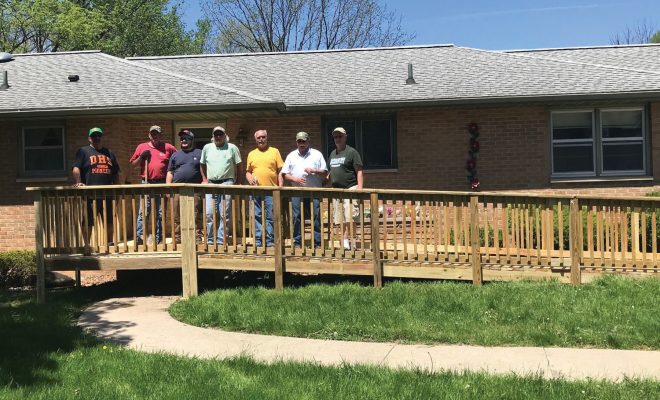 Friday the 13th was a great day for the Gruber family of Summit Township, as about a dozen members of the Knights of Columbus descended on their home to install a wheelchair ramp for their daughter, Gisela.

The Grubers badly needed a ramp because Gisela has low muscle tone due to the abnormality, leaving her wheelchair-bound. When they bought their new ranch house this past year, it was perfect on the inside for their daughter but had three steps needed for access. Gisela’s parents’ backs were starting to feel each of those steps over the past ten months.

Joseph and Crystal Gruber moved to Jackson more than four years ago to serve as Catholic missionaries alongside the parish of St. John the Evangelist and its pastor, Fr. Chas Canoy. It has been their joy to share life with people here in south-central Michigan, including letting people get to know their little Gisela and their four other children.

The Knights of Columbus were mobilized by a call from Dominic Kryst, a relative of the Gruber family. Dominic’s caseload includes Knights’ Councils in south-central Michigan. He attended a meeting at St. Joseph Shrine, home of the Irish Hills Council 6223 of the Knights of Columbus, where he learned that they had earned the Family Service Award at the state convention in 2017 for their long history of ramp building in Michigan. Dominic simply asked if there was a possibility of getting a ramp for Gisella.

And the Knights said “Maybe.”

The cost of materials was about $1,600, more than twice the cost of the same ramp two years ago.

The St. Johns Knights raised more than $800 at their breakfast. The Irish Hills Knights coincidently received a donation of materials from a slightly used ramp in Petersburg, Michigan. On Monday, May 9, the Knights drove to Petersburg, loaded up the lumber and delivered it to the Gruber family residence. The value of the lumber: is more than $700. They had the materials.

Deacon Gene Hausmann then was invited by Grand Knight Maynard Hartke to a meeting of the St. Johns Council 8392 and proposed a joint effort of the two councils to help the Grubers. The St. John Knights responded with an enthusiastic “YES!” In fact, they immediately designated their monthly breakfast proceeds to pay for materials and offered as many volunteers as needed. The project was on.

Hausmann said that this was something everyone enjoyed being involved in, because it was a community project, and the Gruber family is very deserving. “We were very enthusiastic and with the experience of Council 6223, the project went smoothly and quite professional, which we couldn’t have done alone. Overall, it was extremely worthwhile, and our Council looks forward to working with them again.”

The Knights of Columbus are an international order of Catholic men whose mission includes empowering Catholic men to live their faith at home, in their parish, at work, and in their community.