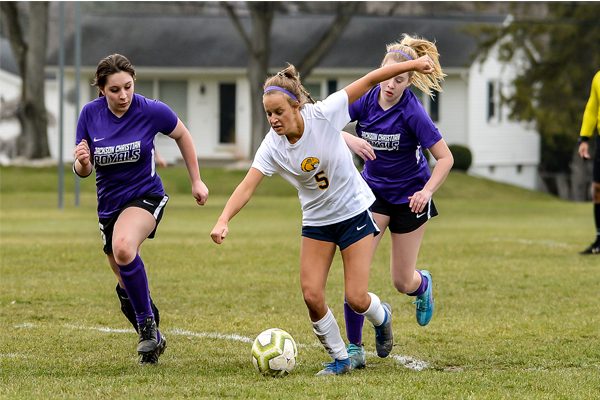 Alyssa Stewart (5) of Columbia Central High School battles for the ball against Jackson Christian during a match last week.

Last year the Columbia Central High School girls’ varsity soccer team wondered if they would have enough players to field a squad of 11 during a number of matches.

The Golden Eagles played matches a couple of athletes short.

But things are looking up according to CCHS soccer player Alyssa Stewart.

Stewart, a junior, joins 21 other players and CCHS has Jackson College Coach Andy Hosmer back to lead the team.

The Golden Eagles jumped out to an 8-0 win over Jackson Christian, April 5th, at JCHS. Stewart scored a hat trick in the win. (more below)

“Our team has some really good numbers,” Stewart said after the win. “We have some new girls who have never played before and are stepping up.”

It would have been easy for the Columbia Central High School varsity soccer team to pack it in last season.

The Golden Eagles had a new coach and played with less than 11 players during a number of games in 2021.

Stewart, who has been playing the sport as early as she can remember, said last year was a learning experience. After losing her freshman year due to COVID, the Golden Eagles played a number of games with eight or nine players – instead of 11. (more below)

“The positioning on the field was different . . . we had to work together to make it go,” Stewart said.

“We would give motivational talks on the bus trying to get ourselves worked up (prior to games).”

Stewart said she enjoyed her best season on RUSH Soccer during the summer.

“I finally had a chance to play my position . . . it was the best season overall,” Stewart said.

She even had a chance to scrimmage against players at Jackson College to also gain soccer experience.

“Being 5-feet, 2-inches tall makes it a little scary,” Stewart said of the experience. “The first practice I was a little chill, but the next I went up against some of the better players.”

Stewart said she would like to play college soccer but still has two more seasons at CCHS.

“I think we can go far this season,” Stewart said. “I am hoping we can be conference champions.”