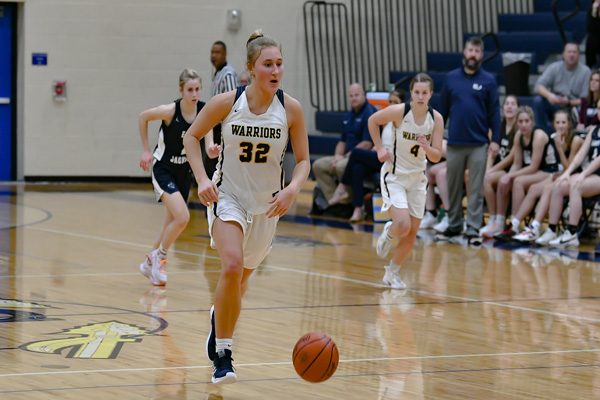 With the loss of Abrie Cabana through graduation and Lexus Bargesser from injury, Grass Lake High School girls’ basketball may not be the favorites to repeat as Division 3 state champions.

But don’t tell Gabi Lutchka and a young bunch of hungry Warriors.

The Warriors drilled East Jackson last week by 40 points using mostly freshmen and sophomores in the second half.

Lutchka and Ashley Stapleton are the only active seniors left on the roster.

“Losing Lexi doesn’t put a lot of pressure on us,” Lutchka said. “There are a lot of girls working hard in practice to fill Lexi’s role.

“We have a lot of girls playing AAU who can contribute.”

Lutchka has been on the varsity squad for four years and has experienced the best runs by the Warriors in girls’ basketball.

The senior is hoping to pass along a few lessons to some of the younger girls on the squad.

“I hope to be not only a mentor but a great friend they can have on the team,” Lutchka said. “I have been through it all for four years and a lot of these girls are just starting.”

Lutchka, Bargesser, and Ashley Stapleton plan team dinners and other activities to draw the team together.

The Warriors finally got to the top last year winning the Michigan High School Athletic Association Division 3 state title. Lutchka, Cabana, and Bargesser scored 40 of the 52 points in a 52-50 win over Kent City.

“There was a lot of pressure taken off by winning the state title,” Lutchka said. “We hope to get back there and win it again.”

Lutchka has signed to play Division II basketball at Northwood next fall. She will join Springport High School graduate – and former AAU teammate – Alana Nelson on the team.

“I am excited to go there,” Lutchka said. (more below)

She plans to study supply chain or hospitality management at the business school.

Lutchka holds the school record for points in a game (56) and 3-pointers in a game (16) following an explosion against Manchester in February of 2020.

She believes that sports teach discipline and leadership.

“There are a lot of times in practice when I am dead, but discipline tells me I have to do this,” Lutchka said. “Successful people do the extra things for the team.”

Lutchka expects to graduate GLHS with a 3.8 grade point average on a 4.0 scale and 20-plus college credits from online classes.