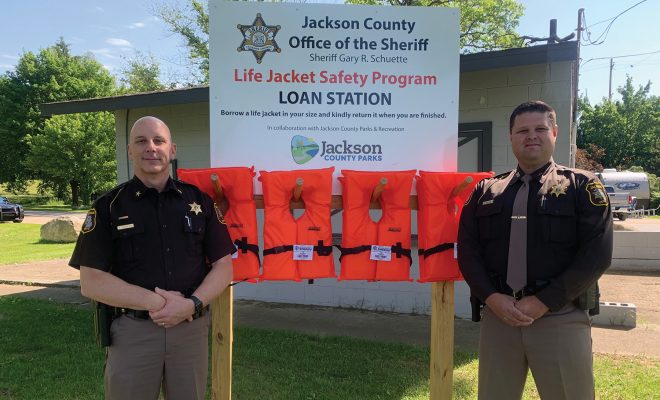 Summertime is a busy season around lakes everywhere as people head out on and into the water. Jackson County is no different with its many lakes available to the public for water recreation and swimming. Unfortunately, every year there are a few drownings in area lakes, many of which could have been prevented. Case in point was the recent drowning at Devils Lake in Lenawee County.

“It was nice to see small children utilizing the loan station life jackets days after it was opened for the season,” noted Jackson County Sheriff Deputy Jay Truchan, who spearheaded the program. “I was able to observe children wearing the life jackets on Memorial Day while they were enjoying Clark Lake County Park.” He added that he hopes parents will think more about water safety for their children simply by looking at the sign at the station where the life jackets are hung.

Truchan said the purpose of the program is to prevent tragedy because of the numerous amounts of fatalities and drownings on area lakes over the years and to promote water safety. “Safety is our top priority,” he stated.

The Life Jacket Safety Program is a pilot program this summer at the three parks and will be expanded to more county parks next year if it’s a success. “We want to be ambitious in our goals, but at the same time we don’t want to stifle the enthusiasm by putting unrealistic expectations on it,” said Jackson County Sheriff Gary Schuette. “The sky is the limit. Three was our goal – that was the basement, not the ceiling. If we could reach all of the county parks – then let’s do it.”

Thirteen of the 18 county parks have some type of lake or waterway that could benefit by having a loan station in the future.

“Everyone recognizes this is an issue that we need to address,” Schuette said. “We’re hoping this program will stop future tragedies from occurring at those locations.”

Eight life jackets are hung on the loan stations and are available at no charge for swimmers and water recreationists to use and return when done. The program is based on the honor system. The life jackets are identified with labels indicating they belong to the Jackson County Office of the Sheriff in the event they become lost and can be returned to the sheriff’s office if found.

“I encouraged [Deputy Truchan] to do it and went with him every step of the way to make sure this was successful,” Schuette continued. “We would love for it to grow. We would love for other people to be involved with it – obviously, this was reliant on donations that we were able to get for the life jackets.”

So, how did this program come to be? During off-duty out of state travel, Deputy Truchan noticed that several organizations in warm weather states had life jacket stands for the public to use. He took his observations back to the Jackson County Office of the Sheriff. Truchan presented a proposal to Sheriff Gary Schuette and received an enormous amount of support for the project. Schuette agreed with Truchan that the program would be great for Jackson County and have a positive impact on water safety. 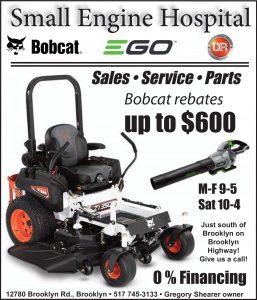 “This project was several years in the making and took collaborating with the Jackson County Parks Department and local businesses to take effect,” said Truchan. The Parks Department was briefed on the life jacket loan station concept, and they graciously gave their approval and agreed to be a partner for the project.

“We thought it was a great idea,” said County Parks Director Kyle Lewis. “I’m glad that safety is at the top of their minds. We were really excited to partner on it – hopefully, it’s a successful program.” Lewis said the life jackets are there not only for emergencies but also for those who feel they are not the strongest swimmers but still want to enjoy the water.

“When Jay [Truchan] approached us, [owner] Blair [Huff] and I both agreed, for a minimal cost, we can help save some lives and keep other people safe that maybe don’t have access to those kinds of things,” Scott said. “It was a pretty easy decision for both of us to be a part of something like that. We both thought it was a great program and we hope to continue to help add to a few more parks and keep our local swimmers, our children, and everyone around us safe. I was especially pleased to see them go to Vandercook Lake where there have been multiple drownings over the past years.”

The life jacket loan stations were made and assembled by Spry Signs in Concord and installed by the Jackson County Parks Department. Jackson County funded the construction of the stations.

“This program was directly within my wheelhouse due to me previously being a public safety director for a municipal beach/lifeguard unit prior to taking on my new role and joining the Jackson County Office of the Sheriff,” Truchan noted.

“We are the ‘Water Winter Wonderland State’ and should focus on water safety – safe swimming should be on the top of our summer checklist,” Truchan continued. “Life Jackets save lives and protect people, so it was important in my mind to give citizens flotation devices to use when swimming in our waterways. Boaters can also use the life jackets upon their vessels to ensure they have enough for everyone aboard.”

The key to the success of the program is to get people of all ages to use the life jackets if they aren’t equipped with their own.

“I hope Jackson County residents and visitors are able to take advantage of this free safety program and utilize the life jackets to keep their friends, family, and loved ones safe,” summarized Truchan.