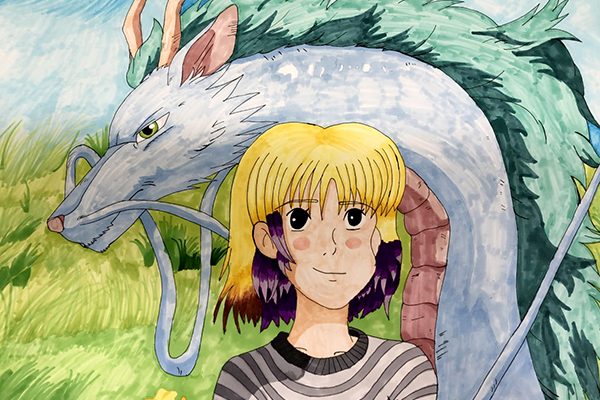 An example of student work from Jackson College’s Figure Drawing Course is shown above. The students were instructed to pick a favorite artist and emulate their work in a self-portrait. This photo was down by Katelyn who selected artist Studio Ghibli. Photo Courtesy of Jackson College Marketing 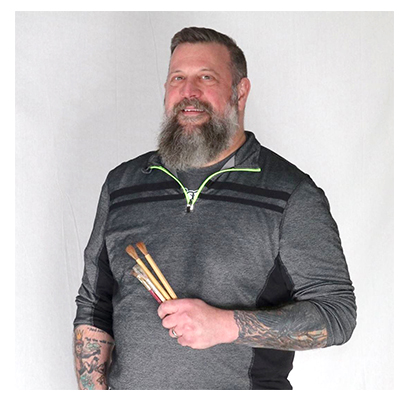 The notion that art can be learned might seem questionable to some people. We tend to identify as creative or not; as artistically inclined or not. Certain people seem to have been born with artistic ability, making the process of art look seamless as they create a masterpiece. Other people struggle to draw stick figures. However, Tom McMillen-Oakley (shown in photo), chair of the Liberal Arts Pathway Department and lead faculty of the Studio Art Department at Jackson College, defies what we think we know about artistic ability based on our experiences. The Napoleon resident teaches students the ins and outs of art and its processes, despite the common misconception that artistic ability is something humans are born with.

As a professor of studio art, he believes it is crucial to maintain an awareness of the craft itself and the various processes that accompany its creation. Students have diverse skill and knowledge levels, like students learning math or how to play an instrument. “I need to find a way to meet all their abilities in the studio and the classroom. I need to know when to dive in, and I need to know when to let the student struggle on their own.”

Second-year drawing and design students in McMillen-Oakley’s art class during his time teaching at Columbia Central High School learned that “drawing, like any other skill, is a learned behavior. It isn’t just something you’re born with.” The project intends to help students combat self-defeating behavior by putting them in touch with how we process information and create art. “I asked the students to begin thinking about how art is created, and then asked them to do a schematic drawing/cartoon illustrating this process.”

Rube Goldberg’s elaborate drawings serve as examples. “There are not many books on Goldberg (American; 1883-1970), but there is a bevy of websites devoted to this man and his inventions.” Students tasked with the project began right away, letting their ideas flow freely onto the pages, although some struggled to the very end.

“To those students who struggled, I suggested they consider how they would explain this process to a child. We often use analogies to explain complex ideas to children, many times using this type of visual storytelling to make our point.” The results stuck with students for a long time after, and the drawings were as varied as the students who created them. “Some were simple; others more elaborate and decorative.” The point was to get students thinking about how we think. “To be able to put that process down on paper is a true sign of intelligence,” McMillen-Oakley says. (More below) 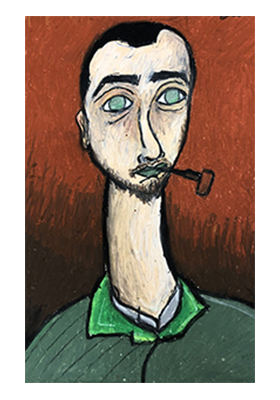 Another example of student work is shown above and was completed by Forester who emulated the work of Modigliani. Photo Courtesy of Jackson College Marketing

Teaching art involves offering students alternative ways to approach their projects. One student compared McMillen-Oakley to his own proclaimed hero Tim Gunn, former mentor on Bravo’s “Project Runway” after helping her figure out some new ways to approach her project in sculpture class. He says, “I love what [Gunn] does, as I do the same thing each day in my studio classes,” explaining that he, like Gunn, goes around the studio and offers creative advice and bon mots to his students.

McMillen-Oakley believes that the way to teach art involves more than inspiring a student by placing in front of them a bowl of fruit, some discarded wine bottles, or other ephemera that happens to be lying around the studio expecting the student to draw what they see. Much like him when he was a student, some students need to be taught how to draw what they see.

McMillen-Oakley’s love of art began during elementary school. “Due to my burgeoning talent, I was given the “Excellence in Art” award, which allowed me to take classes at the Toledo Museum of Art on the weekends. What fun!” he says.

However, despite “wonderful instructors,” undergraduate education at the University of Toledo and the School of Design at the museum was a struggle. “I almost didn’t make it past the gateway classes (drawing and design) because I couldn’t get the required grade needed to move on to the advanced level classes,” he says.

The turning point for McMillen-Oakley happened when an instructor used the Edward’s method by Dr. Betty Edwards, author of Drawing on the Right Side of the Brain. “That was my moment. This was my rallying cry,” he says, determined not merely to inspire his future students, but to teach them as well.

This same instructor cautioned the class of art education students that since they didn’t specialize with a particular media, they might someday be considered “a master of all, proficient at none.” Taking this to heart, he pulled a studio focus on sculpture and pottery. “I not only learned the craft, but I learned how to teach the craft as well,” he says. “I watched each lesson. I rented videos from the library that showed pottery and sculpture techniques in depth. I devoured it all.”

“Art is about growth, both in skill and in the ability to think through a problem/project, and, in the words of Tim Gunn, ‘Make it work,'” says McMillen-Oakley. Art teachers are tasked with making this process happen for their students by offering that nudge toward inspiration and creative voice and teaching them how to create art.