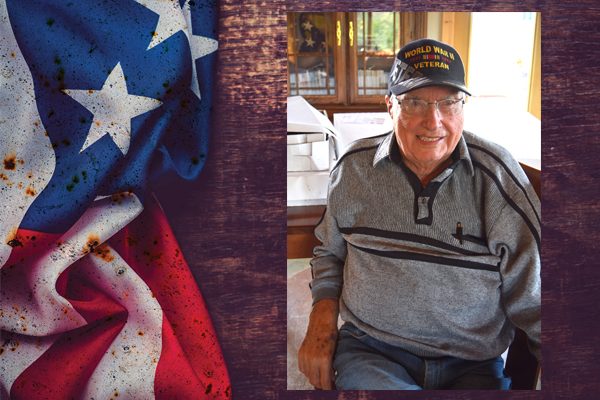 Herb Elfring, of Jackson, is a World War II veteran and a Pearl Harbor survivor. Elfring, now 99 years old and in good health for his age, served for the U.S. Army in the 251st Coast Artillery. He will turn 100 on March 22, 2022. There are not many veterans left from World War II that can still describe the experience first-hand as Elfring can.

“I was near Pearl Harbor on December 7, 1941, when the Japanese hit the island,” Elfring said. “I was about three or four miles from the harbor, but the Japs knew where every military installation was on the island, and they hit everything.”

Elfring was stationed at Camp Malakole on the island of Oahu, Hawaii. “I was narrowly missed that morning,” he said. “The first time was by about 15 feet when the first zero plane came over. Not too long after that another plane came over. It was aimed at the radar that we had set up.” (more below)

Elfring said his crew jumped for cover when the second plane came by and sprayed bullets down near them. “The line of bullets was between the power plant and the radar. It cut the power cable that fed the power from the generator to the radar,” he said. Luckily for Elfring, he escaped uninjured from that horrific event.

Elfring noted that he spent the entire time of World War II in the Pacific Ocean (referred to in military terms as the “Pacific Theater”). “My California National Guard was activated in September of 1940. We were deployed to Hawaii in November of 1940. I was there 13 months before the Japanese hit Pearl Harbor.”

Following his time in Hawaii and the historic events at Pearl Harbor, Elfring’s U.S. Army warship patrolled the Pacific.

“The 251st Coast Artillery I was in was deployed to the Fiji Islands and onto the Solomon Islands, then onto the Philippines. Then I came home on points (see sidebar on the point system) in July of 1945.

“While I was home, the A-bomb was dropped on Hiroshima and I was given orders to go report to Fort Leavenworth, Kansas, for separation from the service,” Elfring stated. “Due to terminal leave I had not taken, my official discharge from the Army was November 18, 1945.”

This December 7, Elfring will be in Honolulu, Hawaii for a ceremony to recognize the 80th anniversary of the remaining World War II veterans, including those like Elfring, who survived the bombing of Pearl Harbor.

“He’s a hero to so many people,” said Annie Callan, development director of Camp Liberty, a camp serving disabled veterans in Norvell Township. “We’ve become such good friends that we’ve talked about that day so often.” Callahan says that Elfring even comes out to Camp Liberty every so often for children’s educational programs to share his knowledge and historical experience from World War II and Pearl Harbor with today’s youth. We thank you, Herb Elring, for your dedicated service to our nation!