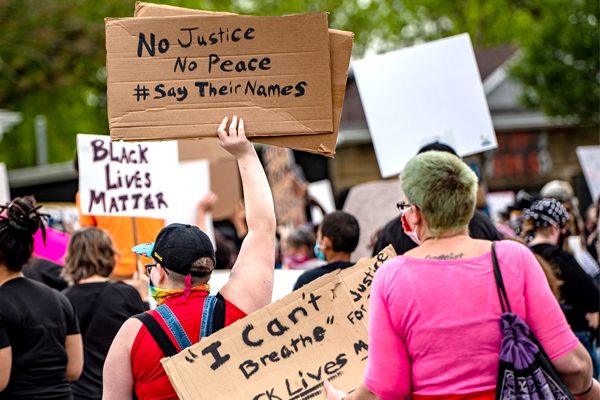 Above: Protesters rallied in Jackson recently to speak out about the killing of George Floyd in Minnesota as well what they perceive as ongoing injustices.

Two protests have been held in Jackson stemming from the killing of George Floyd, a black man, by a white police officer in Minnesota after the officer knelt on Floyd’s neck for almost nine minutes. So far, the protests in Jackson have gone off without a bang.

That is a good thing, but things nearly went south when a young man attempted to torch a squad car during one of the protests.

Police say that the man broke away from the protesters and squirted lighter fluid on a parked police car that was blocking a gate and lit it with a cigarette. A fire did start, but quickly went out on its own, possibly because of windy conditions. It caused minor damage to the vehicle.

The man’s image was caught on camera and the picture posted on social media in search of his identity.

The suspect was quickly identified, and before long, a 21-year-old Jackson man came to speak with investigators. He acknowledged what he had done and took responsibility for his actions.

Considering the circumstances, the minor damage caused to the car, and after consulting with Prosecutor Jerry Jarzynka, the sheriff elected not to pursue charges.

“We are thankful to event participants and organizers that other than this isolated incident the event was peaceful,” said Sheriff Rand. They did not elaborate further in the attempted arson case in the press release.

Should charges have been filed against the 21-year-old?

Shouldn’t he have been made an example to anyone thinking of going the violence route in the future?

This is a microcosm of the national debate in how to handle protesters, and specifically those who go beyond protesting to damaging private property and even hurting people. Some hard liners say throw the book at the people causing problems, and even to replace rubber bullets with real ones.

Others say that patience is called for now more than ever.

No doubt there will be as many opinions in this local case as there are people to offer them. We can only take our leaders’ actions as meaning they believe the young man was sincere in his regrets. Perhaps they felt it would be a small olive branch of peace in light of the circumstances.

Or, maybe they weren’t worried about sending signals at all, and felt it wasn’t worth ruining the young man’s life.

Regardless, we are happy that the protests in Jackson and the surrounding areas have been otherwise peaceful. More protests have been planned, and we pray that anyone who participates does not try to push the limits of peaceful protest and engage in violence.

But it seems that this attempted arson case should serve as both an example and a symbol to the community: This man’s life would have been altered forever had officials pressed charges. Arson is a felony, and they had the right, the power and the ability to ruin this 21-year-old’s life, but they chose mercy.

Of course, it does not make up for what police did to George Floyd. Nothing can undo that, and that surely wasn’t their intention.

But this decision not to prosecute could be viewed, in the very least, as recognition that our local police and prosecutors are attempting to understand this complex issue from the eyes of those who are marching.

And that, it seems to us, is a pretty good first step.

Below: A protester holds up a sign in Jackson. 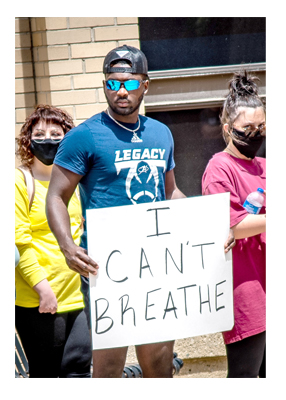 Community news briefs are provided by The Exponent at IrishHillsLive.com. Please, bookmark the site and share. If you have a news tip or topic you would like to see highlighted in the paper or on IrishHillsLive.com, contact us at news@theexponent.com. If you have a photo you would like to share, send to pictures@theexponent.com along with a brief explanation and contact information.