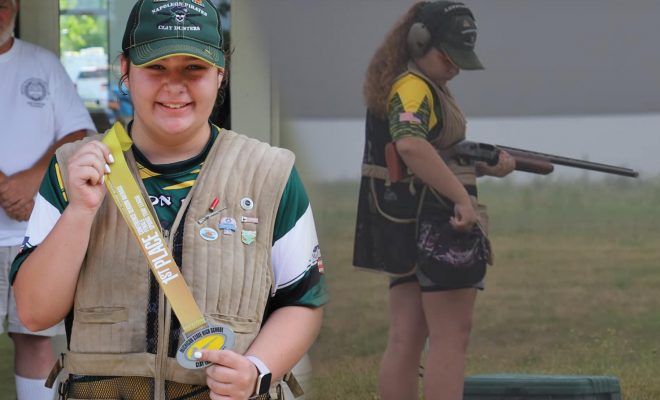 Valerie Burzynski, a soon-to-be senior at Napoleon High School, has found her niche in a non-traditional sport – trap shooting. In the current trap season, she has earned her place among the state’s best shooters, tying for the top of the 2022 Trap All-State Team with a shooting average of 24.5 out of 25 targets. She is currently the number one high school female trap shooter in the state of Michigan.

“This year has been one of my more successful years,” Burzynski says. Valerie also took first place in the trap shooting conference Napoleon competes in. That conference meet was against Columbia Central, as well as other schools from around the state. Conferences consist of schools with like amounts of shooters on their teams.

This Saturday, June 18, is this year’s state competition at the Michigan Trap Association grounds in Mason, Mich. The national competition for high school teams will also take place in Mason this year on July 8-9. Napoleon also competes in the Scholastic Clay Target Program (SCTP). The SCTP national competition happens in Ohio on July 15-16.

“This is by far our best year,” Napoleon Trap Team Coach Drew Haystead says of his team. “Unfortunately, we’re losing a lot of seniors. We’ll have Val around for one more year.”

All through high school, Valerie has consistently placed in conference meets. In the state competition her sophomore year (last season), Valerie took third place in the varsity female division. Valerie has been shooting since she was a seventh-grader at Napoleon. 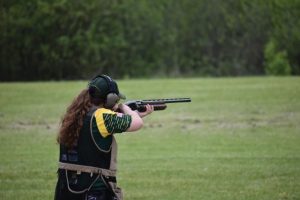 “She’s been a pretty strong shooter since she joined,” Haystead said. “She’s just gotten progressively better each year. She’s a great kid to have on the team.” He said that it’s not uncommon for Valerie to shoot not only in practice and conference play but also in weekend shoots at various trap fields.

The trap shooting season is short – only about five weeks long – so shooters need to make their mark quickly and with consistency. There are 25 clay targets (a.k.a. “birds”) to be shot at during a round. A practice or competition event will consist of shooting two 25 target rounds for a total of 50 targets from the trap station. Napoleon’s home shooting venue is at the Jackson County Sportsmen’s Club.

One of Valerie’s techniques she says makes her aim better is closing her left eye. Once she figured out that she was left eye dominant, she began closing that eye. “I started hitting [targets] after that,” she says.

Valerie shoots a 1,100 Remington semi-automatic trap edition 12-gauge shotgun head down. I notice sometimes I start lifting it up.” She says guidelines call for using a 12-gauge, 20-gauge, or a .410. “Most people shoot 12-gauge just because it has a tighter shot pattern,” she explained. She added that the most popular gun in trap shooting is a BT-99.

Valerie is a very confident shooter but says she still gets quite nervous during a shoot. During the season, the team usually shoots once a week – but that’s not enough for Valerie to maintain that level of confidence. “Me and my dad will usually go out and have practice just ourselves,” she says. “In the summertime when I’m getting ready for competition, I’ll be shooting like three to four times a week.”

With shooting that often, does Valerie get sore shoulders? “No – I’ve got a vest with padding where my shoulder is, so [the frequent shooting] doesn’t really affect it.”

Valerie uses factory-made shells as opposed to reloading her own at home. “That’s because I have a certain speed I like to use,” she says. “I use federal brand shells with a speed of 1,145.”

With the gun, shells, vest, and other accessories, trap shooting can be a fairly expensive sport in which to participate. But it helps to have friends in the sport to curb those costs. “I’ve gotten shells given to me and parts of a gun. We also save up if we know we have to travel somewhere,” she noted.

Valerie gives a lot of credit to Coach Haystead for her success in trap shooting. “I wouldn’t be able to compete in this if he didn’t start the team and was committed to teaching [the participants] and making sure kids can enjoy this sport,” she stated.

In addition to Coach Haystead, Valerie said she receives a tremendous amount of support from the Jackson County Sportsmen’s Club, the Brooklyn Sportsman’s Club, the Munith Rod and Gun Club, and the Jackson County Outdoors Club. “They’ve been supporting me since I first started and kind of watched me grow into this sport,” she says. “They’ve seen me go from shooting one target out of 25 to shooting all of them.”

In terms of her future goals in trap shooting, Valerie would like to become a trap coach at some point following high school. “That’s kind of my plan – to teach more people.”