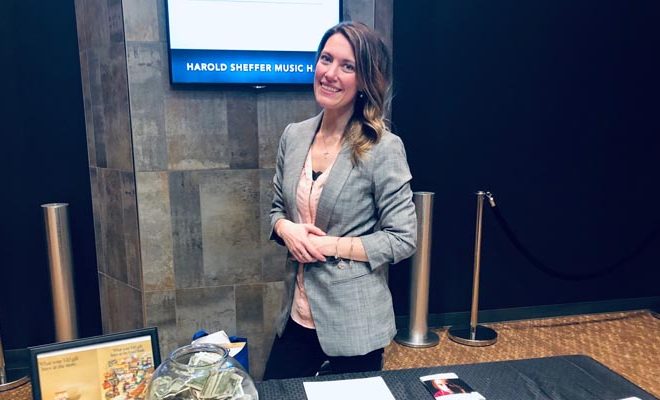 Above: Cherie Good, founder of Go Hungry 4 Hunger, sought contributions to feed the hungry outside of Harold Sheffer Music Hall during the recent JACC Cosmetology Competition at the Jackson College Potter Center.

In 2019, hunger still grips much of the community. Go Hungry 4 Hungry is leading the battle to combat this reality.

These are just some of the startling statistics of the hungry in Jackson County alone. But they are not alone. A new organization that formed in 2015, a “movement” as it calls itself – Go Hungry 4 Hunger – is fighting the hunger in the area.

Go Hungry 4 Hunger is a local movement/project out of Jackson, Mich. that aims to bring awareness toward local hunger by encouraging individuals to live simple in their own way to serve many. The group works with the South Central Michigan Food Bank in Battle Creek where one dollar serves six meals through local food pantries the Food Bank stocks.

(Turn up the volume)

“They give food to all of the local pantries in Jackson County and they can do it at a lower price point than if you were to go to the store, buy food, and donate it to a pantry,” said Go Hungry 4 Hunger founder Cherie Good, encouraging people to give to her organization for that reason, or directly to the Food Bank.

At the March 27 Jackson Area Career Center Cosmetology Competition, Good had the stage for about five minutes and shed light on the hunger problem in Jackson County and surrounding areas with a crowd of a few hundred people.

At the competition, Go Hungry 4 Hunger collected over $550 in donations. This past week, it received a special surprise contribution from the Knuth Family Foundation who generously donated additional funds to get the tally up to $1,000 that will go to Immanuel’s Pantry in Jackson. At six meals for a dollar through the Food Bank, that’s 6,000 meals for the community.

“The biggest thing with this movement is asking individuals to give with compassion and understanding to those around us.”

Over the past two years, Good and a small committee from the movement looked at what defines hunger in the area.

“You will see it is our senior citizens trying to make ends meet on a limited income, it’s our veterans, it’s our working class families who might have lost a job recently and thought that they had planned accordingly but were not anticipating having to live off of only one income,” she said, adding that sometimes people have to decide if they’re going to pay bills or provide food for their family.

Every second Saturday Good gets a group of volunteers together to lend a helping hand at Immanuel’s Pantry.

“I’m here to tell you that there are 250 people that walk through those doors every single Saturday,” she said. “And that is one pantry in our area out of 17 total. The need is real and you can see it first-hand. The best way to see it first-hand is by lending a helping hand and volunteering at a local food pantry.”

Go Hungry 4 Hunger’s goal is to bring the community together (businesses, schools, churches, organizations, individuals) to show support for the hungry while being humble in giving up simple wants to feed needs. 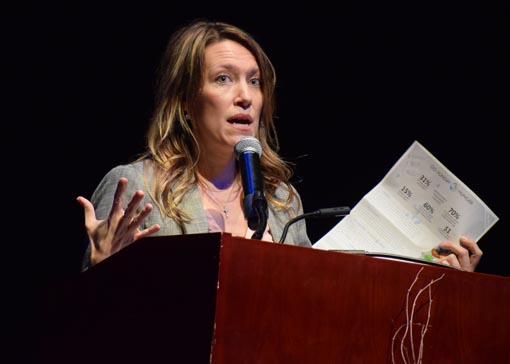 “The biggest thing with this movement is asking individuals to give with compassion and understanding to those around us, because we don’t know what the true face of hunger looks like,” Good said. “I would love to be the voice for those individuals who can’t speak for themselves. That’s my mission with this movement.”

Good also encouraged the students present to give compassion and understanding.

“When you see that ‘hangry’ student – you know who they are because they exist – keep in mind that they may be living in a rough environment at home, so the last thing they need is to also be bullied or criticized when they’re at school,” she said.“We need to give love, compassion, and understanding when we’re in our school environment so that we can lift others up and support our community.”

Good challenged those at the Cosmetology Competition to think about what role they can play in helping out the community.

“Even if it’s just for one week,” she said. “What is something you can give up, or how can you help someone in our community? Hopefully, we as a community can be more intentional to help those in need.”