‘Something neat’ coming to downtown Brooklyn 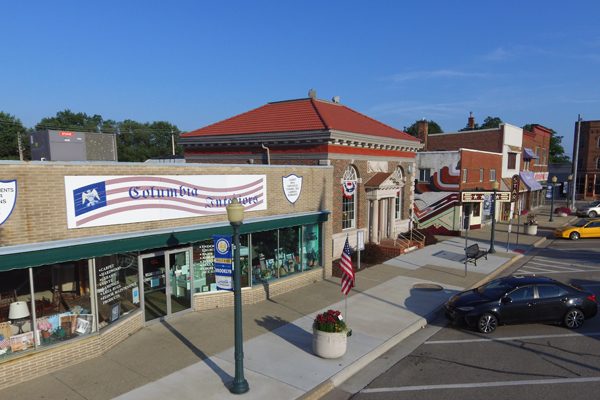 BROOKLYN: When Sue Reichel and her partners put the Columbia Interiors Main Street showroom building on the market in February of 2021, she didn’t think it would sell in less than a year – but it did – and the new owners couldn’t be happier and more enthused about not only the building’s future but also the Village of Brooklyn’s future.

Welcome, Taylor Aue, 39, and his wife, Abie Baldwin, 44, new owners of the old Columbia Interiors Main Street building. Their plan is to transform the building into a restaurant.

“It wasn’t the building so much as the location,” Aue said. “We’re really focused on finding opportunities to do creative projects in Brooklyn, particularly on Main Street in the Village Square; projects that honor the history of Brooklyn and also bring fresh new energy to its future.”

This Exponent file video shows a portion of the east side of the village square.

“They are great people and super enthusiastic about Brooklyn,” said their realtor, Annie Hoover. “It’s hard not to grasp their enthusiasm and what they’re going to bring to this community. They have the wherewithal and knowledge to execute something neat here in Brooklyn. I couldn’t be more excited. And the fact that it’s working out for Sue [Reichel], it’s just a win-win all the way around. It’s going to be great for the village and the community in general.”

Aue noted that the building they bought isn’t all that architecturally significant, but because of that, it gives them a lot of flexibility in what they can do given its size, relatively modern construction, and the fact that they don’t feel tied to restoring any historical elements or other sentimental aspects, such as across the street at the JP Kline building that houses Marilyn’s Hairstyles and Four French Hens – which, incidentally, they purchased as well.

“It’s funny. We actually decided to buy the JP Kline building first, before we had even committed to the idea of doing a restaurant,” Aue explained. “Like I said, we are huge fans of the Village Square. And we’re also suckers for cool old buildings. So, when we learned of the opportunity to buy one of the oldest, and most historically significant buildings on the square, it was a no-brainer.” Their tenants are all planning to stay in place, for the time being, so aside from maybe a fresh coat of paint in the spring, don’t expect too many big changes on that side of Main Street right away, noted Aue. 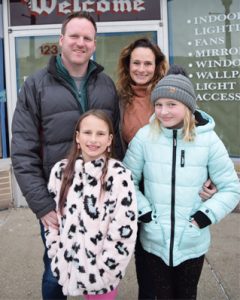 Taylor Aue, and his wife, Abie Baldwin, with their daughters Emma and Lily.

Back to the Columbia Interiors building of which they just finished interior demolition last Friday. “It’s definitely going to be a major project,” he said. “We stripped it completely down to the core. It’s going to be a completely new construction build-out inside.”

Of the two, Baldwin is the creative genius when it comes to interior layout and design. “We’re just getting started on that part so no specific plans yet, but the space is definitely going to be unrecognizable from what it was in its past lives – it already is,” Aue said.

Aue is no stranger when it comes to the restaurant business. He operates three restaurants in Chicago – all called The Pasta Bowl. “They are small, cozy, neighborhood pasta shops,” he notes. Their concept for the Brooklyn restaurant is still somewhat fluid.

“We might borrow an idea or two from my Chicago restaurants, but it’s not going to be a Pasta Bowl, or an Italian place, or a Chicago place,” he says. “We want it to be creative and flexible, and we want it to highlight what’s great about our community. Locally farmed ingredients are an obvious choice, which we plan to feature as much as possible. There will definitely be a lot of familiar American food on the menu, but we’d like to include some unique and adventurous options, too,” adding that everyone will be able to find something they can appreciate on the menu.

“Our focus is on creating something that is high quality – not just the food, but also the experience,” Aue explains. “There is a cost to deliver a high-quality product and experience. I don’t expect we will be the cheapest place in town, however, we’re 100 percent committed to putting out something that people will value and appreciate.” (More below) 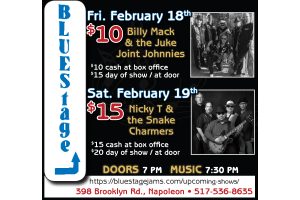 Part of that experience will be the beverages to compliment what surely will be tantalizing meals. At Monday’s village council meeting, a “Development District” liquor license was approved. Aue noted that that type of license is a great way to encourage local investment in communities such as Brooklyn. “There’s a little more paperwork and red tape involved in that, so if it works out that there’s an existing license available for purchase, then we would go that route instead,” he said. “But either way is fine with us.”

Similar to the food menu, one can expect to find a lot of what’s comfortable and familiar behind the bar, but also some different and unique options as well. There will be hand-crafted cocktails, a solid wine list, and some interesting local beers, as well as “plenty of Coors Light and White Claw, too,” noted Aue. “And, if anyone else wants to nerd out about scotch and bourbon with me, we’ll probably be meeting on Thursday nights around 8,” he prognosticates.

Aue estimates there will be at least 10-15 staff members from the start – a number he expects will grow quickly. As for managers, “We are definitely looking for at least one or two energetic and motivated people who want to take an active role in helping us create, adapt, and grow this business as well as some other projects we’re planning in the future.” As for the challenges in the labor market finding and retaining help, Aue says, “It just comes down to how you treat people. We plan to make sure our business is a place people want to be a part of.” He added that his restaurants in Chicago have had employees for five, 10, and even 15-plus years.

Aue says they hope to have the restaurant open by the end of 2022 and are optimistic about hitting that goal. “We’re also mindful of the fact that everything from building materials to kitchen equipment, to construction labor, is in high demand right now, so there is definitely some flexibility in our expectations for when the doors will open.”

“We are extremely passionate about Brooklyn – there’s a lot of really positive and creative energy here, and we are by no means the first ones to see the opportunity to invest in that as a business.”

So, how did all this come to be? Aue grew up in Royal Oak, while his wife Abie grew up in Brooklyn. Coincidentally, they both moved to Chicago in the early 2000s to see what the big city had to offer and that’s where they met and spent the last 20 years living and working. They decided to tie the knot in 2006 and came back to Michigan to be wed at Weller’s in Saline.

“Abie had always thought she might like to move back to the area someday, and after my first few trips back with her for the holidays, when we were dating, it didn’t take much to sell me on that dream,” Aue said. “We’ve talked about doing this a lot over the last 20 years, but it wasn’t until 2019 that we decided to fully commit. Our daughters both were in early elementary school, and we realized that the longer we waited, the harder and more disruptive it was going to be for them socially and emotionally. So, while we still didn’t really have a clear idea of how it would work, we decided it was time to start looking for a home near Brooklyn. We found a cool old house right here in the village. It needed a lot of work, so we ended up doing a total gut rehab and moved in just before Christmas of 2020.” They are now fully committed to Brooklyn, with their two daughters attending Columbia Upper Elementary School.

“We are extremely passionate about Brooklyn – there’s a lot of really positive and creative energy here, and we are by no means the first ones to see the opportunity to invest in that as a business,” explained Aue. “A lot of new businesses have opened in the village recently. There’s a lot of energy being focused on the Village Square, and we’re really excited to continue building on that.”

So, what do they do in their “spare” time? “Our girls are both avid dancers and gymnasts so during the colder months we spend a lot of time watching cartwheels and back walkovers in the living room – when we’re not watching Harry Potter #3 for the 27th time,” joked Aue. The couple also has a cottage on Evans Lake so their summers “are all about boat rides and bonfires.” Once in a while, Aue picks up his guitar, but more often a book.

Baldwin’s passion project is her Foxtail Flower Farm where she grows a wide variety of unique blooms and botanicals that you don’t see every day. “The coolest part is it’s all grown at her parent’s property, where she grew up, just five minutes east of downtown Brooklyn,” Aue said. Currently, she’s mostly selling wholesale to a number of florists in the Jackson, Ann Arbor, and Detroit areas, including Angel’s Floral Creations in Brooklyn. She also sells bulk buckets of flowers directly to people who want to do their own floral arranging, whether it’s for fun or for an event. She sometimes paints, too.