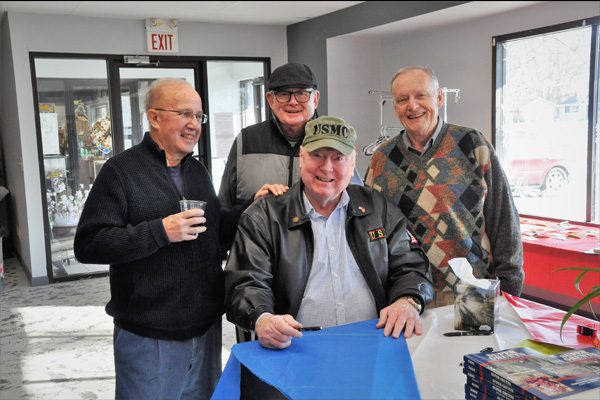 Brooklyn native Norm Khon, seated, is pictured with three of his longtime friends at a recent book signing. From left are Dennis Garn, Greg Clevenger, and Larry Culp. Khon served in the U.S.M.C. Reconnaissance during the Vietnam War, and wrote down some of the stories of his times in the Corps. 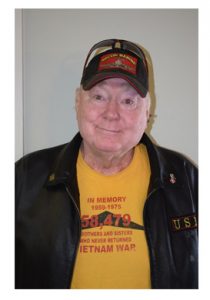 Have you ever wondered what the Vietnam War was like for a member of the U.S.M.C. Special Ops Reconnaissance team? Brooklyn native Norman Khon decided to write about it, and the result is ‘Super Grunts’ A Warrior’s Recollections of Vietnam.

The book is a great read, but, be warned upfront, Khon does not shy away from using Marine Corps lexicon. He explains in the forward that “Marines tell it like it is, and sometimes our language gets a little rough. Okay, we cuss a lot. Like all the time. Since most of the people who read this are my family and friends, they won’t be surprised.”

It is worth noting that some of that colorful language appears in this story, so those who are sensitive should consider themselves warned. For example, Khon frequently uses the word “gook” when talking about the enemy throughout Super Grunt. “It might sound politically incorrect today, but that is what we called the people who were trying to kill us, and I wanted this book to be as real and authentic as possible,” said Khon.

Khon graduated from Brooklyn High School in 1967 – the year before Brooklyn, Cement City and Clarklake consolidated to create the Columbia School District. Khon was an All-state athlete who played basketball, football and ran the high hurdles. “It was a pretty good time to be a teenager,” he said, but there was a foreboding as well. “I never paid much attention to the war until a couple of guys who graduated a few years earlier from my high school got drafted and were sent to Vietnam. When they came home, it was pretty clear something had changed about them.”

Super Grunt takes readers through Khon’s decision to join the Marine Corps rather than waiting to get drafted. He writes of what it was like at basic training, but most of the book centers on his experiences in Vietnam as a member, then a team leader, for a special operations Recon unit.

“Our job was to gather information,” said Khon. “We would take six men on patrol, spend 7-10 days out there with orders to avoid contact at all costs, but that was tough to do because we were patrolling in their back yard. I was on 20 some patrols, and I would say almost every patrol we went on we were in a firefight, some intense, some not so intense. It was pretty s—– out there.” (more below)

While Marines might be tough and battle-hardened, they are still human. “Sometimes it was tough getting the courage up to go out there again. It was pretty intense,” said Khon.

So how did he come up with the title for his book?

“All Marines are called grunts. We got into a really bad [firefight] on my first patrol. My door gunner saw what was going on because he was up above us. When we got back to the rear he jumped out and was counting holes in the chopper. I kneeled down and was kissing the tarmac because I thought I might not see it again. He came over to me and said, ‘You guys aren’t grunts, you guys are super grunts.’ And that is the name of the book.” He elaborates more about that specific mission in the book.

Khon touches on several difficult memories in the book. He writes about his initial patrol, in which he first met the enemy head-on in battle. He writes of losing people close to him and notes how he struggled with many of these memories for the rest of his life.

Besides the war, Khon touches on how he was treated in airports on the way home, and how it rankled him when people disrespected his fellow Marines and servicemen.            “They were mad at us, and all we were doing is what our country told us to do,” he said.

“There were 58,479 that didn’t make it home so they could protest,” he said. “It [the war] ruined my first marriage. I was able to overcome some things, but not all of it.” He said that it was 30-35 years after coming home that anyone actually thanked him for his service.

“Coming home was a tough transition. You get on a plane, and 12 hours later you are back in civilian life. It was tough.”

Khon said he wrote the book for his kids. “They kept asking me, ‘Dad, what did you do over there?’ They said they wanted to know what I did over there.”

Super Grunts is a quick and interesting read. It is available on Amazon.com for $15. To purchase a copy, go to the book section of Amazon and type in the name Norm Khon and Super Grunt.