The dirty deed of washing cars 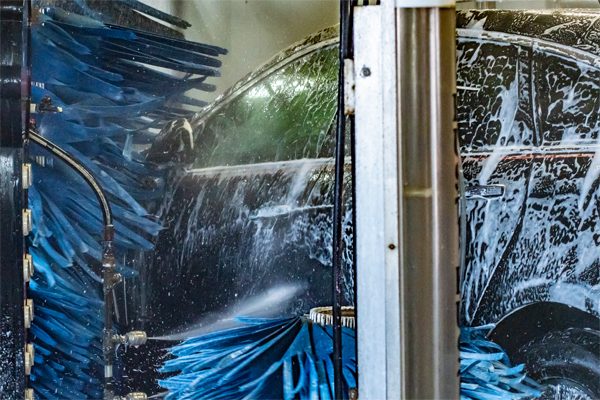 Clean it up! “We find all kinds of weird stuff in the mornings when we come into work. Endless weird things go on at night.” Colin Maurer, Old Crossing Car Wash

We traverse hundreds of miles of roads and expressways, making it impossible to quantify the amount of dirt, grime, salt, and sludge cars attract. Lucky for us, the Maurer family cleans them up at their three-car wash locations, including Old Crossing Car Wash in Brooklyn, Center Car Wash in Michigan Center, and Sunshine Car Wash in Jackson.

Brothers Cole and Colin Maurer work alongside their father, Brent Maurer, doing a sometimes dirty, usually wet, job. They aren’t complaining, however, as the business of washing cars is generational.

It started with Denny Maurer, as he built the Ann Arbor Road and Page Avenue locations in 1988. Since then, these locations have been a staple in the community, as car owners select from a variety of different types of car washes starting with the basic wash and dry to the works, complete with waxing options. The Maurers purchased their Main Street location in Brooklyn in 2014. 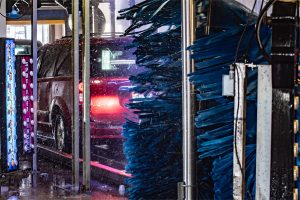 Colin Maurer remembers spending time at the car wash as a kid. “I came here with my dad every day before school.” He says it’s something different every day, partially due to weather – sunny days are busy, rainy days are slow. “It’s not a tedious job where you’re doing the same thing every day. The work is generally the same, but the weeks get broken up nicely.”

Contrary to what some might think, wintertime is the busiest time of year for washing cars, as people don’t tend to want to wash their own car in the cold temperatures. Additionally, the prolonged salt build-up is known to cause damage to cars, making the car wash a bigger priority for people in the wintertime when salt is frequently found on roadways. 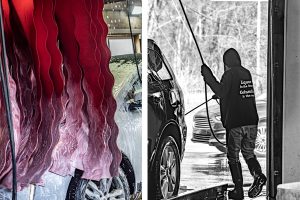 So how do the car wash’s employees feel about it? They are exposed to various weather extremes, from heat and humidity to bitter cold. The ‘tunnel’ provides some protection from the elements; however, with both doors open at either end, there’s no way to fully escape.

“We heat the tunnel in the wintertime, but the heaters can only heat the space so much, especially with both doors open,” Colin says. “But it’s easier to wear more layers of clothing to keep warm in the winter than it is to keep cool in the summer.” 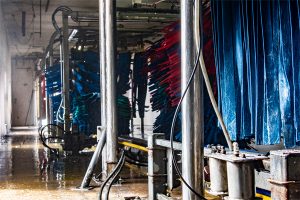 High-powered jets of water allow attendants to remove dirt and grime from cars, as they strategically direct the trajectory of soft water to areas of the car that need extra attention before going through the next phase, such as wheel wells. As the car is motioned forward, attendants use large brushes to apply preparatory soaps and cleaning solutions. Finally, the car is guided onto the conveyor system which causes the car to roll along through the tunnel, past several machines. 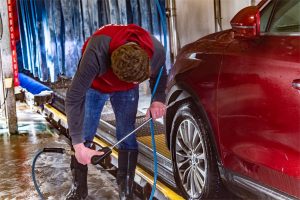 Above: Cole Maurer washes a car at the Old Crossing Car Wash in Brooklyn.

The Maurer family purchased the Brooklyn facility in 2014.

First in the lineup is a pre-soak – an arch containing several small nozzles that spray a special solution on the car, followed by a mitter curtain which is a series of long, soft strips of cloth that hang from a frame. This step is motorized, causing the cloth strips to rub back and forth across the horizontal surfaces of the car such as the hood, roof and trunk.

After a coat of foam, a special mix of chemical cleaners, water, and air, coats the car. Multiple scrubbers and long vertical cylinders with hundreds of small cloth strips attached quickly rotate, cleansing the vertical surfaces of the car. In addition, wrap-around washers move around to the front and rear of the vehicle. (more below)

Finally, soft, clean water rinses the remaining soap and residue from the car before it moves through a powerful dryer. Soft water is helpful in avoiding spotting and the quality is generally better for the vehicle. Colin says they go through tens of thousands of gallons of salt in the water softener. He adds that water drains into large retention tanks which filter out the dirt and grime before the water moves onto the sewer.

As for being a car wash guy, Colin says, “You’ve never seen it all. You think you’ve seen it all, then something new will happen.” Even those who have been in the industry for 50 years agree. 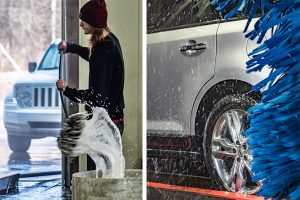 The Maurers employ around eight or nine people at their Old Crossing location and 10 at their Sunshine location. Colin says they would like to find more employees, especially for sunny days when the line of cars seems to be never-ending.

New hires are trained to do the job efficiently. Colin says he shows them how to wash the cars in the most efficient, effective way. “It’s awkward; it’s not a motion you do any other time unless you wash your own car at home. But even then, to be efficient it takes time.”

He says that while they try to keep their methods as simple and efficient as possible, the job is labor-intensive. “After a long day’s work, we are whooped when we walk out of here. A lot of people don’t realize it – we’ve had people walk out on the first day once they found out how labor-intensive it is.” 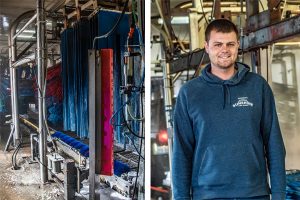 But utilizing their energy on washing cars isn’t the only battle. Colin says they can’t forget about self-serve bays and the automatic, touchless wash bay. “We find all kinds of weird stuff in the mornings when we come into work. Endless weird things going on at night,” he says.

The use of counterfeit money is possibly their biggest problem, however, as people try to feed fake bills into the machines. These bills are typically detected, posing its own problem in that it then shuts down the machine and will not take further money from other customers until someone resets it. “That can be a problem at night when none of us are here because then the next vehicle coming through can’t use the car wash either. We just hope they come back so we can make it right.”

Sunny days see more cars than rainy days, and spring and fall are busy because the substantial rainfall makes mud adhere to cars, in every nook and cranny. “Wash me” scrawled in dried mud and dust is a clear indication that your car needs to be washed, but perhaps keeping up with cleanliness is the better route for preserving your car’s surface. Maurer’s car wash locations provide convenient, high-quality car washing based on your needs. While it is a dirty job, we are glad someone is there to do it!