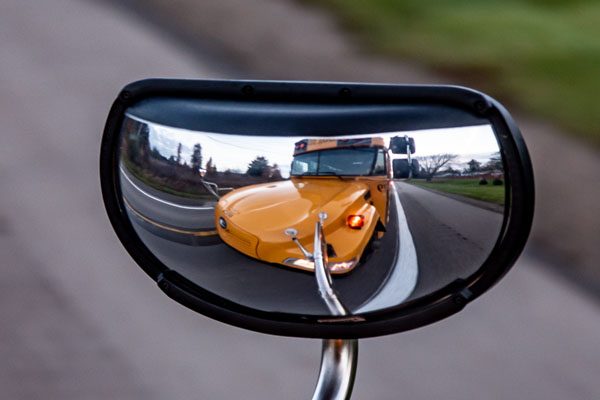 “I’ve worked a lot of different jobs in my life, and this one is absolutely the best.” Sharon Shirey, a bus driver at Napoleon Schools “It really is a rewarding job. It’s not the easiest – you’ll always have the one or two [students] who don’t make it easy, but it’s a great job.” Shawn Murphy, transportation director at Napoleon Schools.

Story and photos
By Christine MacIntyre

Bus drivers play a vital role in the school system, as they are responsible for transporting precious cargo (aka., your children) from home to school and back home again. Much of what you’d assume about being a bus driver is null and void until you’ve sat behind the seat of the notorious big yellow bus.

The ongoing widespread bus driver shortage has prompted questions about the career and its pros and cons. While many outsiders speculate that the career choice isn’t worth the pay, the bus drivers I spoke with at Napoleon said they wouldn’t have any other job. Several have been there for more than ten years, including one bus driver going on her 50th year.

Shirey’s workday begins around 6:15 a.m. when she arrives at the transportation office to prepare for her morning routes. Her bus, one of many waiting to transport kids, gets a thorough pre-trip routine every time she takes it off the lot. 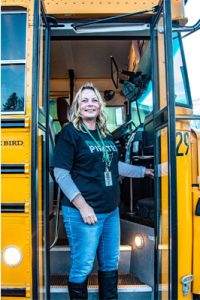 Sharon Shirey has been a full-time bus driver for five years and says it’s her favorite.

“When [bus drivers] are trained, we learn what to look for as far as hazards – loose seats, spills, anything broken or out of place, as well as making sure all equipment is operational,” she says. As her bus heats up, she walks the aisle and inspects the bus’s outer parameter. “It’s all about safety and taking precautions.” She records her findings in a logbook which serves as a notification for the maintenance staff.

There’s more to driving a bus than meets the eye. As parents, we see bus drivers sitting behind the wheel with one goal – get students from Point A to Point B. However, achieving this objective is complex, with many factors playing a role. From limited visibility caused by darkness, fog, or rain, to deer and turkeys on the move. From commotion inside the bus to other drivers on the road.

Shirey says the key is feeling confident in your ability, good and thorough training, and pacing yourself. “I was taught that, as a bus driver, I should do my job all year as I would if it were winter-time,” she says, adding that the year-round consistency regardless of weather conditions provides the assurance of ample time to prevent feeling rushed.

“People truly do not understand everything that comes into play – bus drivers are operating a 40-foot moving vehicle filled with students,” Murphy says. So, they’re not only aware of risks and hazards inherent to any driver; they must be keenly aware of the happenings inside the bus, as well. 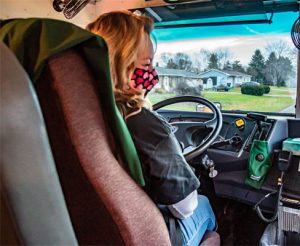 Sharon Shirey is attentive to her students while remaining focused on driving.

Shirey adds, “You’d be surprised how many drivers have no lights on when it’s still mostly dark outside.” Bus drivers need to see other vehicles clearly, both while driving and when at a bus stop.

The lights on her bus serve as a means of communication for other vehicles. “A lot of people don’t know what my different lights mean and what they’re supposed to do,” Shirey says. The state of Michigan recently passed laws placing more severe penalties on drivers who fail to adhere to the safety protocol of a stopped bus.

“When my overhead yellow lights are flashing, and I’m slowing down in preparation for a stop, I’m watching for vehicles to prepare to stop. If they don’t look like they’re going to stop, I don’t put on my red lights or put my stop arm out until they pass.”

Much like a yellow traffic light, drivers should stop unless they’re already too close to the bus to stop when the yellow lights first turn on. When the bus’s red lights flash, drivers should come to a complete stop at least 20 feet away from buses. Flashing hazard warning lights mean to proceed with caution. (more below)

Murphy says he is thankful for Napoleon Township Police Department, which proactively assists in enforcing the rules. “They keep an eye out for violators, especially in areas such as M-50 that are hot spots for passing a stopped bus. Buses do have stop-arm cameras, so, if necessary, we can obtain proof from that.” However, police catching an offender in the act seems to be beneficial – a luxury, not all townships were afforded until the state’s recent law changes.

Drivers who illegally pass stopped school buses risk receiving a civil infraction carrying a fine between $100 and $500. In addition, according to the state of Michigan’s website, violators may also be required to perform up to 100 hours of community service at a school.

Shirey says students will never walk across M-50 due to the abundance of traffic and speed. “If I have a stop on the opposite side of M-50, I’ll pull into their driveway to do so. The families are great about working with us and offering us a spot to pull in and even turn around.”

The first route of the day is done entirely in the dark. Middle and high schoolers have been learning about safe bus etiquette since they were young. “They know to wait until I have my flashing red lights on, put my stop arm out, and I motion for them to walk across,” Shirey says. 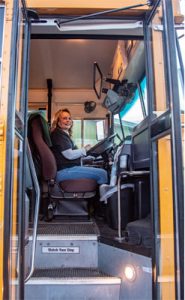 Sharon Shirey has been a full-time bus driver for five years and says it’s her favorite.

As students ascend the stairs to her bus, Shirey greets each one by name with a smile on her face, albeit under the mask she is required to wear per federal guidelines.

She says her morning riders are still waking up and are relatively quiet on their ride to school. However, they’re livelier and more talkative after school, and more students are present on the bus.

Once the older students arrive safely at school, Shirey takes a slight pause before heading back out for her elementary route. “It’s nice now that the time changed because it’s light by the time, I pick up the little ones,” she says. But unfortunately, there are times of the year when she is picking up the younger students in complete darkness.

Her younger riders are learning the rules of the bus – the expectations from the time Shirey stops the bus to the time they reach their destination. “They’re always in training; they’re learning when it’s safe to walk and why they have to wait. All my riders know I have basic bus riding rules,” she says. These rules include sitting down, facing the front of the bus, and keeping their body parts and belongings out of the aisle. “Everything has a purpose – all my rules and the bus’s lights and equipment.”

“The seats act as their seatbelt,” Shirey explains. According to the state of Michigan’s website, students are kept safe via a protective envelope provided by strong, closely-spaced seats that have energy-absorbing padded seatbacks. Compartmentalization, a passive occupant protection system, is most effective when occupants are fully seated, with nothing extended into the aisle. 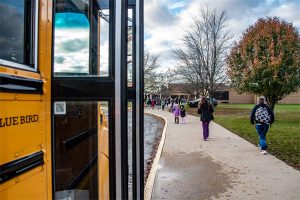 “I’m not a big talker while I’m driving because I want to remain focused on the road,” says Shirey. However, the young students require reminders throughout the trip. “Sit down, please,” ‘Miss Sharon’ says to her littlest riders – kindergarteners whom she places in the first few rows. “Keep your hands to yourself” and “Face forward” served as gentle but firm reminders of the rules.

Apart from reminding students of the basics, bus drivers may face other distractions as well. These are just some of many possible circumstances, from needing a Kleenex to the urge to use the restroom, to tattling on their seat partner, and even vomiting while the bus is moving. “I’m constantly paying attention to my driving, the road, other vehicles, but I’m also always noticing what’s happening inside,” Shirey says.

Each bus accommodates up to 77 passengers; however, Murphy says he tries to keep it under 52 students. His most packed bus currently transports 50 students at one time.

Despite the level of responsibility bestowed upon bus drivers, much joy comes with the job. Shirey, like many of the bus drivers at Napoleon, loves the one-on-one student interaction. “I absolutely love kids – that’s why we all do this job,” she says.

She has been a full-time bus driver for five years, after quitting her previous full-time job, during which she worked as a substitute bus driver for 20 years. “I’ve worked a lot of different jobs in my life, and this one is absolutely the best.” (more below)

The district has been especially helpful in fostering the positive attitude of their bus drivers. Murphy says he wants his drivers to feel appreciated. “We recently had a banquet for our bus drivers where we provided them with breakfast.” He says he focuses on team building and tries to accommodate scheduling requests, as well. “We are so spoiled here,” says Shirey – a statement that speaks volumes about the district, transportation department, the work environment, and her co-workers.

“We currently have ten full-time drivers and two subs who I can call at any time. I could use more drivers,” says Murphy, adding that his district has been very fortunate in terms of the bus driver shortage. “We’ve got a good team that works together and tries to do the best for our kids.”

He believes the ongoing COVID-19 pandemic worsened the shortage; however, he says the federal government has made it more of a challenge to become a bus driver. “There’s more training involved – it’s closer to that of a semi-truck driver than it was before.” Applicants must pass their CDL testing and bus driver training.

Murphy, who followed in his grandfather’s footsteps and has been with Napoleon’s transportation department for 14 years, says, “It really is a rewarding job. It’s not the easiest – you’ll always have the one or two [students] who don’t make it easy, but it’s a great job.”

Driving a bus is appealing to various potential candidates, including moms with kids in school or even farmers. If you value a set schedule with the middle of the day off, summer’s off, paid holidays, and, of course, interaction with kids, driving a bus might be for you! 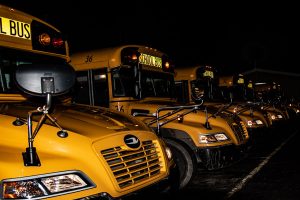